Of course not. But the media seems to be buying the GOP's false equivalence 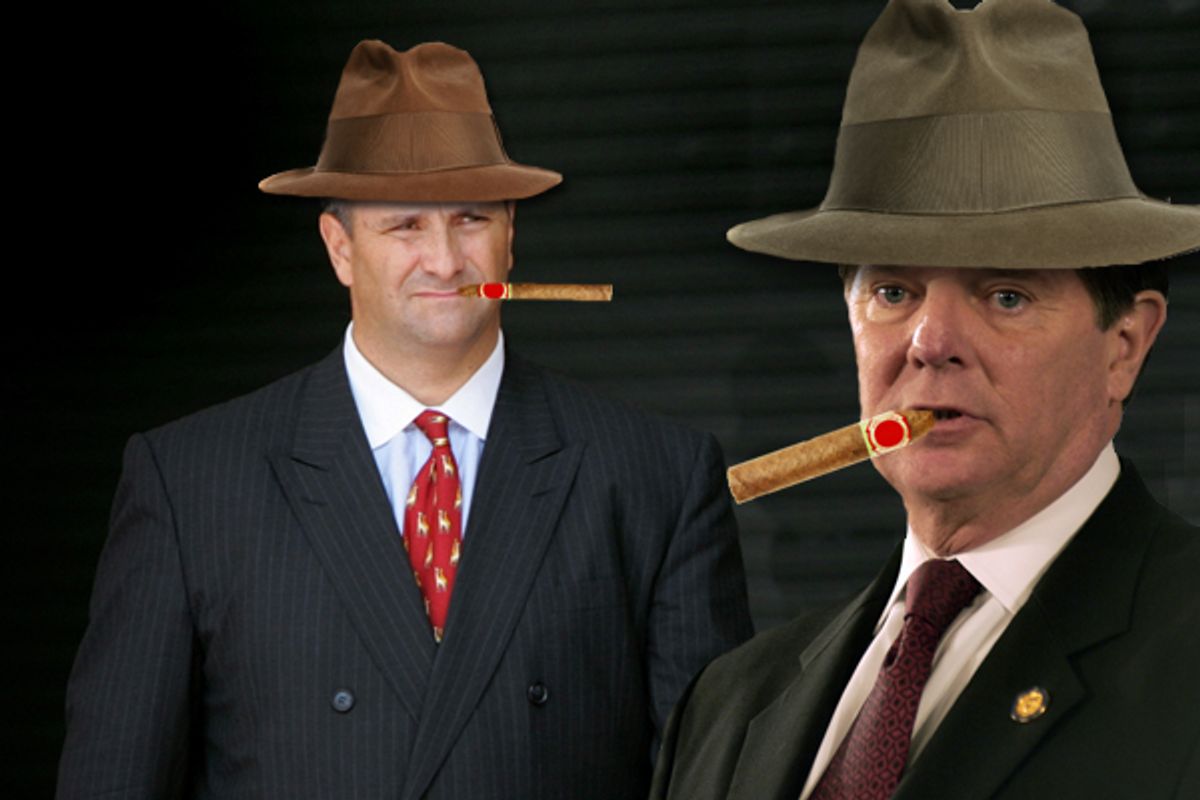 I predicted Wednesday that Republicans and the mainstream media would soon have a new but typically simplistic partisan line: that recent scandals involving Democratic Reps. Eric Massa and Charlie Rangel and New York Gov. David Paterson would make 2010 what 2006 was for Republicans -- the year voters punished the party for its corruption. Throw in oldies but goodies like former Illinois Gov. Rod Blagojevich and former New York Gov. Eliot Spitzer, both Democrats, and I foresaw an avalanche of 2006-2010 comparisons. And I was right.

Before I attack that false equivalence, let me make clear: I'm not defending these Democrats. I said on "Morning Joe" Tuesday that Paterson should resign, given the mounting evidence that he abused his power to help an aide duck a serious domestic violence charge. I was a Blagojevich critic like every other Democrat, and I wrote at the time that it was wrong to seat Roland Burris in Barack Obama's Senate seat after Blagojevich's cynical appointment.

But this is another dramatic case of the double standard the media can't seem to avoid when it comes to Republicans and Democrats. The big difference between the two sets of scandals is that GOP corruption in 2006 was big-time, it was systemic -- and much of it was covered up, ignored and, in some cases (House Majority Leader Tom DeLay, anyone?), perpetrated by congressional leadership. Nancy Pelosi's team came in and developed ethics standards and investigation protocols that are working in the Rangel case, standards that many Republicans, including House Minority Leader John Boehner, opposed.

If you simply examine the corruption scandals, there is no comparison. (This post by the great Joe Conason is a must-read.)

And unlike Democrats, Republicans rallied around their corrupt leader. Unbelievably, the House GOP changed its own rules so that DeLay could stay on as majority leader even if he was indicted.

Indeed, DeLay was indicted, and he finally resigned his speaker post after that. But it took him months to resign his House seat.

There's also nothing on the Democratic side like the Jack Abramoff scandal, which tainted a lot of GOP Congress members and reached up into the Bush White House (where Karl Rove's secretary was a former Abramoff employee; the two men enjoyed dinners and basketball games together). The Abramoff scandal resulted in the conviction of GOP Rep. Bob Ney, two Bush White House officials and nine GOP congressional aides.

Let's move on to sex. Rep. Eric Massa resigned Friday, only days after reports surfaced that the House Ethics Committee was investigating whether he sexually harassed a male aide. Former GOP Rep. Mark Foley, by contrast, survived several reports of wrongdoing and only resigned after ABC News revealed sexually inappropriate instant messages with an underage House page. The bigger scandal in the Foley case was the way GOP House leadership treated the sexual harassment reports. A chain of high-level GOP aides, reaching into the office of former Speaker Dennis Hastert, was shown to have known about Foley's issues months before the conclusive IMs were revealed.

Finally, contrast the fates of Democrat Eliot Spitzer and Republican David Vitter. Both men admitted patronizing prostitutes. Spitzer resigned; Vitter didn't, and he's running for reelection to his Senate seat with his party fervently behind him.

I could go on. Clearly corruption and sexual high jinks go on in both parties. But Republicans tend to rally 'round their wrongdoers, and Republican leadership protects them, while Democrats have done a demonstrably better job dealing with their messes, which are also smaller potatoes than what we witnessed with DeLay and Abramoff. But will voters be able to tell the difference? Not if the media collude with Republicans to push a false equivalence.

I discussed these issues Friday with Chris Matthews and Bob Shrum on MSNBC's "Hardball." I think I did OK.