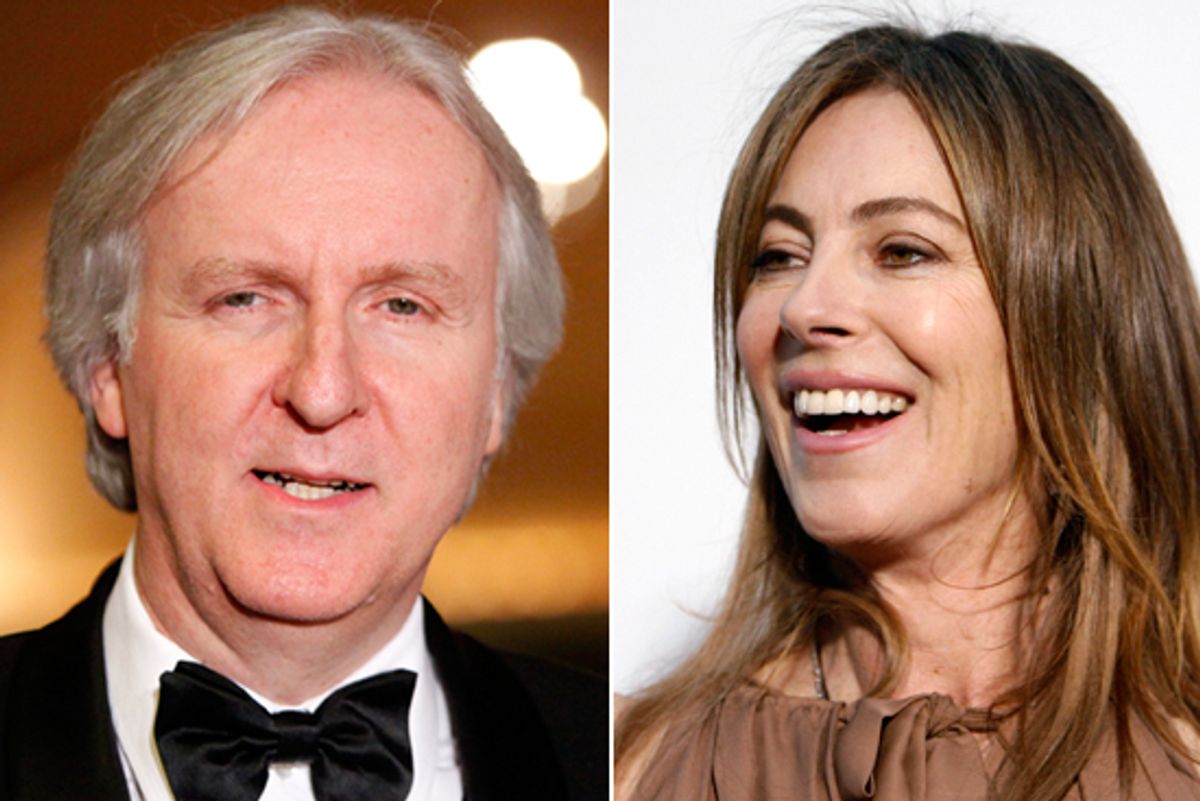 Despite all trends, tea-leaf readings and leading indicators, I remain convinced that we'll see a split ballot, with "Avatar" winning best picture and Kathryn Bigelow taking best director. I could try to convince you that I know what I'm talking about -- but listen, just scroll down and read the excerpt from Chris Orr's New Republic piece on this same subject. What he said.

I'm no good at picking acting awards, but I know the smart money is on Jeff Bridges and Sandra Bullock. (Does that presage a major Republican sweep in November?) I'd prefer to think it's a Clooney-Streep year; that's a fine blend that's not going to make anybody unhappy. I write that without even having seen "Julie and Julia," mind you. I love Meryl Streep almost always, in almost everything, and it isn't the chick-ness of the film that's driven me away, exactly. (I saw "Mamma Mia," for God's sake!) Mo'Nique is a shoo-in, and so, I suppose, is Christoph Waltz, although I think "Inglourious Basterds" is a vastly overrated film and suspect Waltz is skating on slimy, superficial Euro-urbanity. Best documentary is a category I should be able to pick but never can -- I'm betting on "Food, Inc." this year, without much confidence.

As far as what should happen, but probably won't -- I'd love to see "The White Ribbon" win the foreign-language award, largely because I suspect that if and when dour Austrian auteur Michael Haneke actually touches an Oscar statuette, the universe will implode. It's like a matter-antimatter reaction, something that defies and subverts the laws of physics.

We definitely won't see Agnès Varda pick up an Oscar for her autobiographical documentary "The Beaches of Agnès," which wasn't even nominated. That is absolutely scandalous, but it's no good being scandalized by the Academy nominators being idiots and philistines. That's more or less their job. All Varda did was launch the French New Wave and become a pioneering female filmmaker when there weren't any role models (who weren't Nazis). I don't even want to say this -- it's not like there's some competition between them -- but that kind of puts Kathryn Bigelow, whom I admire, in the shade.

Lisa Rosman, critic for Us Weekly, Flavorpill and other outlets:

Predictions: While Kathryn Bigelow accepts her Oscar, the camera will focus for a miserably long time on Cameron, and vice versa when Cameron wins his (I agree it will be a split).

What I'd like to see: I want someone to thank their psychic (obviously), their rehab and (of course) their plastic surgeon.

This year as I'm hosting my annual Oscar party, I know only one thing for sure. I'm going to miss Hugh Jackman's tour de force as host. Don't get me wrong, Alec Baldwin and Steve Martin are great picks, and I'm actually glad they have a duo. It's a job almost too big for one man or woman. (Maybe the Academy should have tapped "30 Rock" co-host Tina Fey as well.) But it's hard to beat a song-and-dance-man of Jackman's charm and abilities for a night of the kind of pageantry the Oscars always strives for, but rarely achieves. Though reviews were mixed, I thought last year was pretty awesome. Who else could fill Jackman's shoes? Dare I suggest Stephen Colbert? Check out his Christmas special for some serious song-and-dance-man cred. Unlike Jon Stewart, Colbert has the ability to pull off postmodern humor in such a way that an older audience doesn't notice he's being postmodern. Or if the Academy really wanted to be daring, get another SNL fave, Dwayne ("The Rock") Johnson. Playing the Tooth Fairy isn't getting him any nominations, but a hosting gig? Why not? But I digress.

With the larger pool of nominations for the major categories this year, we may see split votes in many categories that let dark horses through. I imagine Bigelow will walk away with best director. Despite "Avatar's" success, Cameron has his Oscar. Oscar voters are all about rewarding an artist for cumulative works (see the wins for "The Lord of the Rings: Return of the King"). Women directors are due. And so is Jeff Bridges. He'll definitely walk away with his first well-deserved award for an amazing body of work. Mo'Nique deserves supporting actress for a performance that gave me chills. I'd love to see "Precious" star Gabourey Sidibe win for best actress as well, but that's just my Cinderella dream for her. Beyond that, I think it's a crapshoot.

Prediction: Drunk Meryl Streep. It never fails. Even if she doesn't win (and she probably won't), she'll be good for a hilariously sloppy post-ceremony interview.

What we should see: Kathryn Bigelow wins best director and/or best picture and begins her acceptance speech by saying, "You know what? James was right. I did deserve this more than he did."

Gabourey Sidibe will, alas, not win best actress for "Precious." I adore Bullock's work in "The Blind Side," but Sidibe was a master class in underacting. I love "Avatar" as much as anyone, but nothing would make me happier than seeing "Up" pull the mother of all upsets and win best picture. Won't happen, but it would be a wonderful surprise.

I'd love to see "Food, Inc." win best documentary, but I think it will go to the slightly more buzzed-about "The Cove." And yes, as we've been saying for months on end, this year will be a split ticket, with "Avatar" winning best picture and Bigelow winning best director. And you can bet that photos of Cameron and Bigelow standing together and clutching Oscars will be the lead photo in most online and print publications on Sunday night and Monday morning.

Howard Feinstein, critic for Screen International, the Guardian, indieWIRE and other publications:

As much as I love "The White Ribbon" -- the best film I saw last year -- all polls show that the ancient Academy fogies who vote for this are going for an evidently sentimental Argentine film called "The Secret in Their Eyes."

I think "Food, Inc." is such an important film, but again, "The Cove" is going to win, according to all questionnaires. I guess dolphins are more appealing than chickens and cows, even if all are doomed.

Christopher Orr, critic and reporter for the New Republic:

I'm arguing that it's awfully hard to imagine the Academy giving best picture to a $12.6 million indie over the Biggest Thing That Ever Happened in the World. Here are the key paragraphs from my recent article for TNR:

The issue is not merely, nor even primarily, that "Avatar" made so much money; it's that "The Hurt Locker" made so little. The all-time lowest-grossing best-picture winner to date (adjusted for inflation) is "Crash," which made $55 million in 2005 -- more than five times "Hurt Locker's" adjusted box office. About half as many people saw Bigelow's picture in its entire theatrical run as saw Cameron's on its opening day. For the Academy to elevate so small a picture over one so big would be wildly out of keeping both with its recent, much-discussed desire to keep the Oscars "relevant" to a mass audience, and with its lifelong prejudice in favor of films that succeed commercially.

To wit: Over the past 20 years, the highest- or second-highest-grossing of the five best-picture nominees has won 19 times. The third-highest-grossing has won once -- in 1999, when "American Beauty's" $130 million box office narrowly trailed "The Green Mile's" $136 million. The fourth- and fifth-highest-grossing nominees have not won a single time in over two decades. Where does "The Hurt Locker" stand in this year's overcrowded field of nominees? No. 8 out of 10. (Thank you, "An Education" and "A Serious Man"!)

Or ponder this: Of the last 30 best-picture winners (beyond which comprehensive data is less easy to come by), 11 were among the top five grossing films of their respective years. Only two ("Crash" and "No Country for Old Men") were outside the top 25, and none were outside the top 50. "The Hurt Locker" was the 131st-highest-grossing film of 2009.

The question, I think, comes down to which will be a better predictor of this year's Oscar race: the behavior of the other awards groups over the past six weeks or so, or the behavior of the Academy itself over its 80-plus years of existence? I dearly hope that Vegas and the Oscarologists are right, but for my part I'm betting on history.