"The Oscar": Greatest terrible movie of all time

It destroyed careers -- and won no Oscars. This 1966 spectacle of wretched excess must be seen to be believed 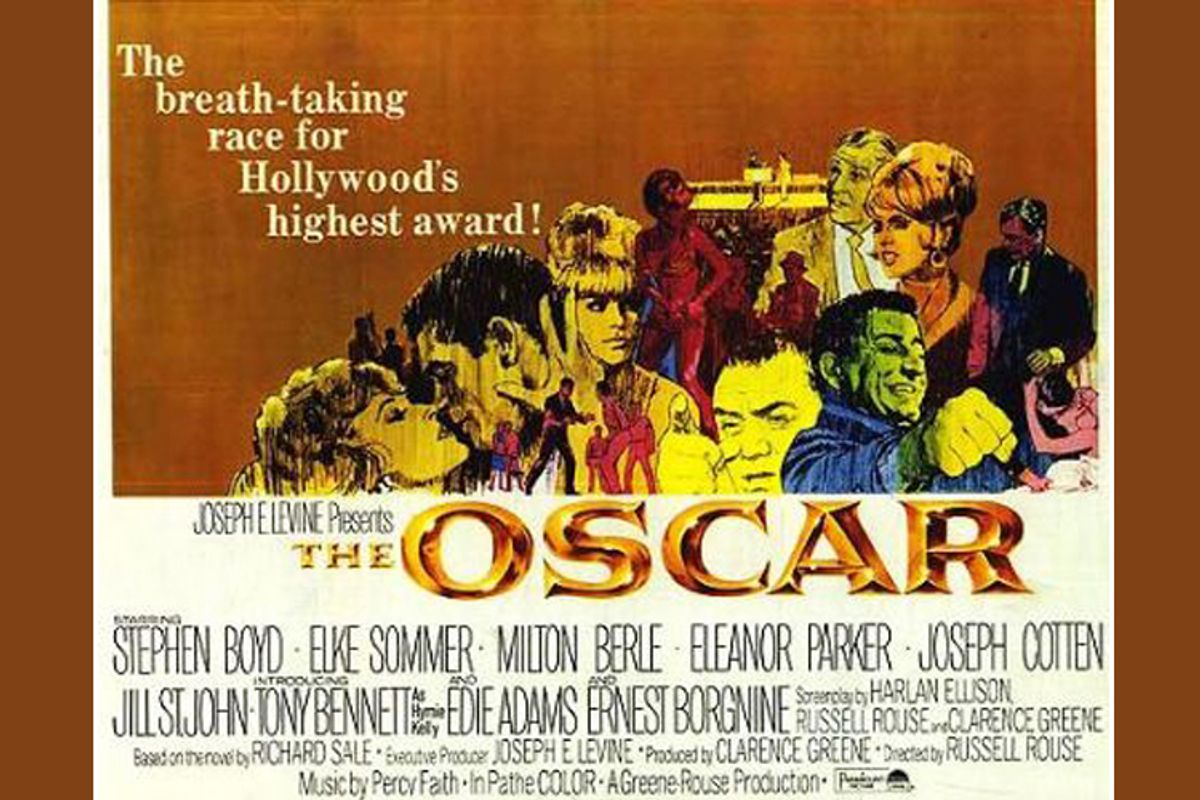 "Nothing is more exhilarating than philistine vulgarity," wrote Vladimir Nabokov, and if there was ever a better description of the Oscars, well, I’m still looking.

On this 82nd Oscar weekend, the world prepares to once again pretend that we care about who wins and who loses. We swear that this time, we’ll set the DVR to record an extra hour, no matter how many promises are made about keeping the event to a trim three hours.

And that essential item would be "The Oscar" -- perhaps the greatest single movie ever made.

Now, I know what you are thinking.

But this rarely shown, not-available-on-DVD masterpiece has a hypnotic power and glory that can transform lives, conjure up its own language, and transport you to a land of surrealistic fantasy. Let a writer who has charted that borderland, Neil Gaiman, tell you just one of the reasons why. "'The Oscar,'" says Gaiman, "is the kind of film where enough little things go wrong to produce a film in which something huge goes strangely right -- but in a way that nobody who set out to make the film could ever have wanted."

The original writer of "The Oscar," Gaiman’s close friend Harlan Ellison, attended the 1966 premiere. Ellison recalls: "I practically wept. I saw this film for which I had worked for a year, and people are laughing in the theater and they're laughing at dramatic moments. And I'm sinking lower and lower and lower in my seat. I remember it as if it were yesterday. I said, 'This is the end of my feature film career.'"

Time magazine concurred with Ellison’s assessment, writing that the film "should be shown exclusively in theatres that have doctors and nurses stationed in the lobby to attend viewers who laugh themselves sick." The New York Times castigated "this arrantly cheap, synthetic film, which dumps filth and casts aspersions upon the whole operation of Hollywood -- a community that may not be perfect but is not so foul as hinted here."

Well, we’ll save that last bit for later dissection.

But even with this disastrous reception, the movie still might have managed to pull out of its death spiral, but it had the misfortune of coming out in the exact second that the Old Hollywood it celebrated was expiring. In a way, "The Oscar" was a barge at its own Viking funeral, dead on arrival.

Yet, here I am, staking my nonexistent critical reputation on this film being some kind of masterpiece.

Last week, Der Spiegel published an article documenting the last four minutes of Air France Flight 447, lost at sea on a routine flight from Rio to Paris. This catastrophe was the result of a cascading series of small events that, when added up, created one of the worst manmade disasters in recent memory.

See where I am going here?

"The Oscar" was based on a trashy not-so-bestseller by Richard Sale, documenting the rise and fall of an unscrupulous heel, Frankie Fane. This is one of the few novels I have read that include footnotes, where the ludicrous action above is contextualized, or disclaimed. Somehow, someone thought this book would make a great movie. They were wrong. And in a decision that would forever haunt the Academy, it allowed its name and Oscar’s likeness to be expropriated. The film’s producer, Russell Rouse, and "director," Clarence Green, were now cleared for takeoff.

Then, the system failures began. Casting, story and script for starters. The original cast was to include Steve McQueen, who was just coming of acting age, as the unscrupulous Frankie Fane, with Peter Falk as his long-suffering best friend, muse and whipping boy, Hymie Kelly. Instead, we got Stephen Boyd and Tony Bennett, in his one and only dramatic role.

More on that later.

Next, the script. In 1964, when "The Oscar" was on the runway, Ellison was blazing a reputation as the fastest gun in Hollywood. Using his experience in the pulps, and ferocious talent for both writing and self-promotion, Ellison’s screenwriting potential seemed limitless. Swinging for the fences, he wrote "The Oscar" as if it were the last big studio feature he would ever get a chance to tackle.

He had that part right, at least.

During the writing process, the script was taken out of Ellison’s hands and "improved" by the director and producer, both of whom would ultimately receive screen credit. According to Ellison; "There were three offices at Paramount in a row. I was in a little room with my typewriter and my desk. In between was the foyer, and there were two secretaries there. I would write a page, and I would put them in the out basket on this side of my desk. My secretary would come in, she would take the pages, she would retype it and take it over and put it on the desk of the secretary over there. That secretary would pick it up, take it into Rouse and Green. They would work on it. They would give it back to her. She would retype it, give it to my secretary, who would bring it in to me. And I would see the same page I had just done. I would say, 'I need you like an extra set of elbows.' Which has got a little something to it. And it would come back, 'I need you like a hole in the head.'"

The end result of this hijacking is one for the ages.

Here are only few of the film's embarrassment of verbal riches, a jumbled remix if you will.

First off, "The Oscar" has its own private lexicon, its secret language. Not content to call hitchhiking, well, hitchhiking, it is called here "busting thumb." "Fat honey-dripper" or "soft in the gourd" is a term of apparent disparagement. "Birdseed," an expletive. People don’t just endure stress in "Oscar"-speak; they have "thrombos," a phrase later expropriated by Austin Powers. They don’t flatter, they "spread the pollen around." And "like a junkie shooting pure quicksilver" into our veins, this "Oscar"-speak eventually transforms into actual dialogue.

What’s not to like about using the line "You lie down with pigs, you come up smelling like garbage!" not once, not twice, but three times? And there is so much more. In a bedroom argument with Frankie, German then-bombshell Elke Sommer delivers the following gem almost phonetically: "You should put that speech on tape, It’s gotten to be a fireproof, gold-plated, diamond-encrusted excuse for never talking to me."

Frankie, or as Hymie refers to him, "Snarly Fane, the boy-faced dog!" has weighed in earlier. "You free-thinkers confuse me. Put a little chlorophyll in the conversation!" Over to Elke. "Take one from column A and two from column B, you get an egg roll either way. I am the end result of everything I've ever learned, all I ever hope to be, and all the experiences I've ever had." Frankie has had enough. "Will you stop beating on my ears! I’ve had it up to here with all this bring-down! I’m me! If you don’t like what you see, then change the scenery!" And of course, there is Hymie, watching it all go down to the wire. "You finally made it, Frankie! Oscar night! And here you sit, on top of a glass mountain called Success. Ever think about it? I do, friend Frankie, I do..."

And in conclusion, Hymie puts it best. "Man, what a scene," he notes. "Forget it!"

If only we could.

There is a very thin line between Clifford Odets' script for "The Sweet Smell of Success" and Ellison’s for "The Oscar." But one had a producer who knew how to cast (himself, in Burt Lancaster’s case) and a director who knew how to actually, well, direct. "Oscar" director Clarence Green clearly knew only one word.

And more is what you get.

It is one thing to read dialogue like the above, but to hear it, see it, live it in a garish, grossly overlit cheesily decorated set, with every verbal crescendo matched by Percy Faith’s melodramatic score, with a "who’s who" cast of cameos, many of them Oscar winners, is a kind of cinematic satori. And then, there is the rest of the cast, from Ernest Borgnine to Jill St. John to Peter Lawford to Walter Brennan to Joseph Cotten to Broderick Crawford to Hedda Hopper (!!) and Edith Head (!!!), all dialed to 11 on the performance scale. The written word, even in "Oscar"-speak, can only go so far.

Imagine if Beethoven's "Ode to Joy" were played, not as a climax, but 73 straight times. That would be "The Oscar." Just about every scene is a shrieking climax, with every available piece of scenery chewed and spit out with insane commitment. And that commitment is the key to the enterprise. It is clear that everyone felt they were making a masterpiece. From Ellison, who crafted every single line as a "too smart" bomb for maximum dramatic impact, to the feral Stephen Boyd, who seems to be having a thrombo in every single scene, to poor Tony Bennett, who bears a striking resemblance to an incontinent basset hound, everybody brought his or her A game. And when the most restrained and dignified performance in a movie is by Milton Berle, you can be assured that you are in the presence of something that seriously warps the space-time continuum.

Despite its criminal non-issue on DVD, "The Oscar" lives on. Years ago, SCTV brilliantly parodied the film in a sketch called "The Nobel," where Dave Thomas possessed the soul of Stephen Boyd possessing Frankie Fane. But the real thing is beyond parody. One anonymous commentator wrote on "The Oscar's" IMDb site that Boyd’s performance is what would happen "if one of the 'Thunderbirds' marionettes had been cast in 'Who's Afraid of Virginia Woolf?' His body language is quite like some poor puppet being randomly jerked around while the puppeteer tries to shake off LSD-conjured spiders."

As another, less anonymous commentator wrote, "Only those who will risk going too far can possibly find out how far one can go."

"You’re making my head hurt with all that poetry!"

What makes "The Oscar" so mesmerizing is the consistency of its deranged vision. All its monumental problems and excesses somehow lead to a critical mass that defies all criticism. If it were any better, it wouldn’t be nearly as great. Like Hitchcock’s "Vertigo," it conjures up its own reality, and somehow, the insane parts make the whole less of a movie, and more of an immersive experience. James Cameron’s Pandora has nothing on Frankie Fane’s Hollywood. Neil Gaiman began watching "The Oscar" by himself but was soon overwhelmed. He had to bring some friends in to complete the journey. Which, of course, is why TCM’s showing Sunday night should make the perfect Oscar party.

At the same time this Viking barge burned down to the waterline, taking professional reputations with it, the film’s executive producer, Joseph E. Levine, prepared his next project. Levine had optioned another minor 1960s novel, also set in Los Angeles.

Only this time, everything went right, with the script, director and cast aligning perfectly.

If you’re looking for a cinematic revelation, well, you now know where to itch.

You’ve heard the lecture, now, experience the lab. "The Oscar" will get a rare public showing on TCM this Sunday night (8 p.m. EST). What is your favorite "Oscar"-speak moment or line? Come Monday morning, I’ll be waiting to hear from you "honey-drippers" in the comments section.

Remember, you do not judge "The Oscar."

[UPDATE: Two minor factual errors have now been corrected, thanks to readers. I originally referred to producer Russell Rouse as "Richard," and misidentified actress Elke Sommer as Swedish.]