Kathryn Bigelow is not a dude 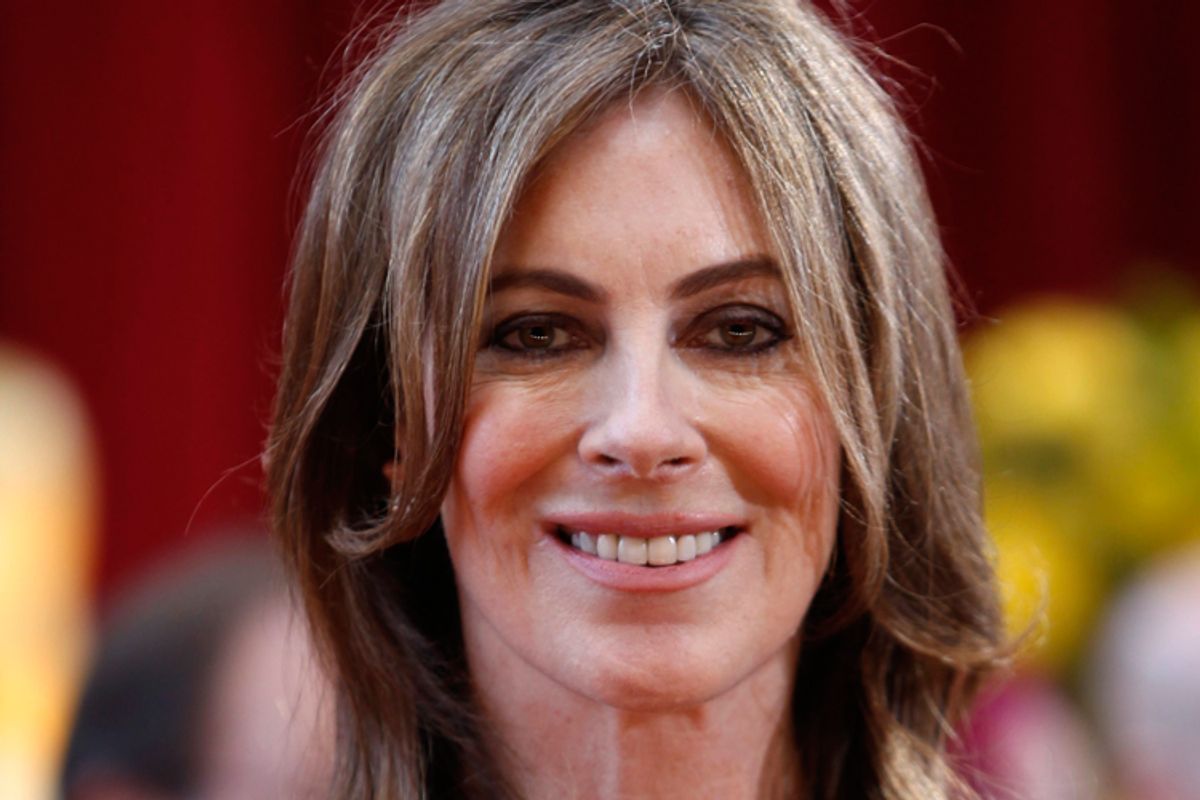 "The time has come," said Barbra Streisand late Sunday night. And with that, Kathryn Bigelow, whose low-budget "The Hurt Locker" edged out the most successful movie of all time, became the first female in Academy history to win an Oscar for best director. (Moments later, she'd make a twofer by winning best picture as well.)

But like every historic first, Bigelow's dual victory was both a stunning personal achievement and resonant metaphor. And not everybody's been thrilled.

Just a few weeks ago critic Martha P. Nochimson wrote an essay here that lambasted Bigelow as "the Transvestite of Directors … masquerading as the baddest boy on the block." And after last night's ceremony, journalist Farai Chideya promptly tweeted, "Among Bigelow's best-known films are three male ensemble casts: 'Hurt Locker,' 'Point Break,' 'K-19 the Widowmaker'. … kudos to cast and to filmmaker and to topic. Gender matrix not so much." So before we bust the pink champagne, perhaps we should ask: Does Bigelow's victory still count for the ladies?

I have a diploma with the word "film" on it, so let me take a crack here.

Of course it does. Are you freaking kidding me?

It's funny, I don't remember anybody trotting out drag queen metaphors when John Madden's "Shakespeare in Love" or Anthony Minghella's "The English Patient" won Oscars, despite their weepy, girly plots. For that matter, in all the conversation about the big battle of the exes between Bigelow and James Cameron, did anybody stop to chide Cameron for an entire career built on decidedly female-centric fare? "Aliens," "The Abyss," "Titanic" and "Avatar" might not be "You've Got Mail," but they're all lousy with strong leading ladies and maternal subtext. (If Cameron were a woman, many large, serious books would be written about the feminist iconography of his otherworldly oeuvre.) Why then are Bigelow's critics so quick to bag on her for doing what good filmmakers do -- making movies with a unique perspective, and an appeal outside of the director's own demographic? Do we really still think the length and breadth of female filmmaking is "Julie and Julia"? Dear God, please, no.

When I was in film school in the '80s, a time when professors still thought it was acceptable to comment on the weight and dating habits of girl students, there barely was any concept of women's cinema. In four years, I studied exactly one female director -- Leni Riefenstahl.

Fortunately, it was also a golden moment for young independent filmmakers, some of whom, miraculously, were not males. (Not all of them were white either -- go figure.) Patricia Rozema, Martha Coolidge and Mira Nair were just breaking out, but the women who electrified my little group of black-clad clove cigarette smokers were Penelope Spheeris and Kathryn Bigelow. Spheeris made rock 'n' roll documentaries and the cult hit "Suburbia"; Bigelow made a weird little vampire movie called "Near Dark." No hankies. No hugging. Kickass!

As the years went by and Bigelow went on to make tough little dramas like "Blue Steel" and "Point Break" -- as well as directing plenty of television cop shows. Her action-oriented style matured, but her style remained distinctive, consistent and always adrenalized. Does that make her a gender betrayer? I don't know, is "Precious" director Lee Daniels a chick for making a movie about a pregnant teenage girl and her mom?

Yet Bigelow's win seems to raise a nagging question in certain heads: Why is it that when women finally get a big award winner, it's for a war picture instead of the kind of fare we so often wind up directing -- those warm Nancy Meyers/Nora Ephron relationship stories? Well, maybe the reason movies like "Mamma Mia!" don't snag the big prizes is as simple as the fact that they're just not that great. Does anybody complain that men are being artistically shut out from serious competition when they go ahead and make "X-Men"?

That's the thing that's both scary and fantastic about Bigelow's win; it says that maybe if we women are stuck making rom-coms and weepies, it's not the fault of the system but ourselves. Want more golden statues on the lady shelf? Then fight like hell to make better movies, whatever the subject matter. The last time a woman was nominated for a best director Oscar, it was Sofia Coppola for "Lost in Translation," a film that was piffling at best. (The only other two female nominees -- the indisputably great Jane Campion for "The Piano" and Lina Wertmüller for "Seven Beauties" -- had their work cut out for them against "Schindler's List" and "Rocky," respectively.) The problem with devaluing Bigelow's win as being merely a clever bit of cinematic cross-dressing is that it takes away from the fact that "The Hurt Locker" is a great film, full stop.

So it's no wonder that a groan went up from my couch when Bigelow's walkout music last night swelled to the strains of Helen Reddy's cheeseball anthem "I Am Woman." (What was the Academy's plan if Lee Daniels had won? Run DMC's "Proud to Be Black"?) See, everybody? Hollywood can recognize a woman! Let's give a hand for the little lady!

Of course masculinity and femininity inform the stories we tell. "An Education" was the story of a girl. "The Hurt Locker" was the story of a man. "Avatar" was the story of a bunch of blue people in a tree. Filmmakers bring their own brand of life experience to the table; there isn't nor should there be an utterly gender-neutral perspective. But anyone who's seen "The Hurt Locker" and thinks that it's just some dude flick is selling its director far short. As a filmgoer who's been following her career for the last 23 years could tell you, it's a Kathryn Bigelow movie. It has her gritty style, her unmistakably dark humor, her gut-punching humanity.

Perhaps, then, it's a good thing the Oscars chose to remind the world last night that Bigelow is both a filmmaker and a female. I hope every film school chick in the world is cheering her triumph, because it represents a victory over sexist college professors and dumbass studio executives and every producer who thinks ladies should stick to baby comedies. It represents the door opening just a little wider for talented, accomplished women to tell the stories they want to tell, whether they're about sweeping romance or kooky comedy or blowing stuff up. There is no need to take away one iota of her accomplishment by suggesting Bigelow earned it by being a dude in a dude's genre. She got it by being Kathryn Bigelow -- a fierce, independent and utterly deserving filmmaker. She's not the king of the world. She is woman. Hear her roar.