The story behind Oscar's "Kanye moment" 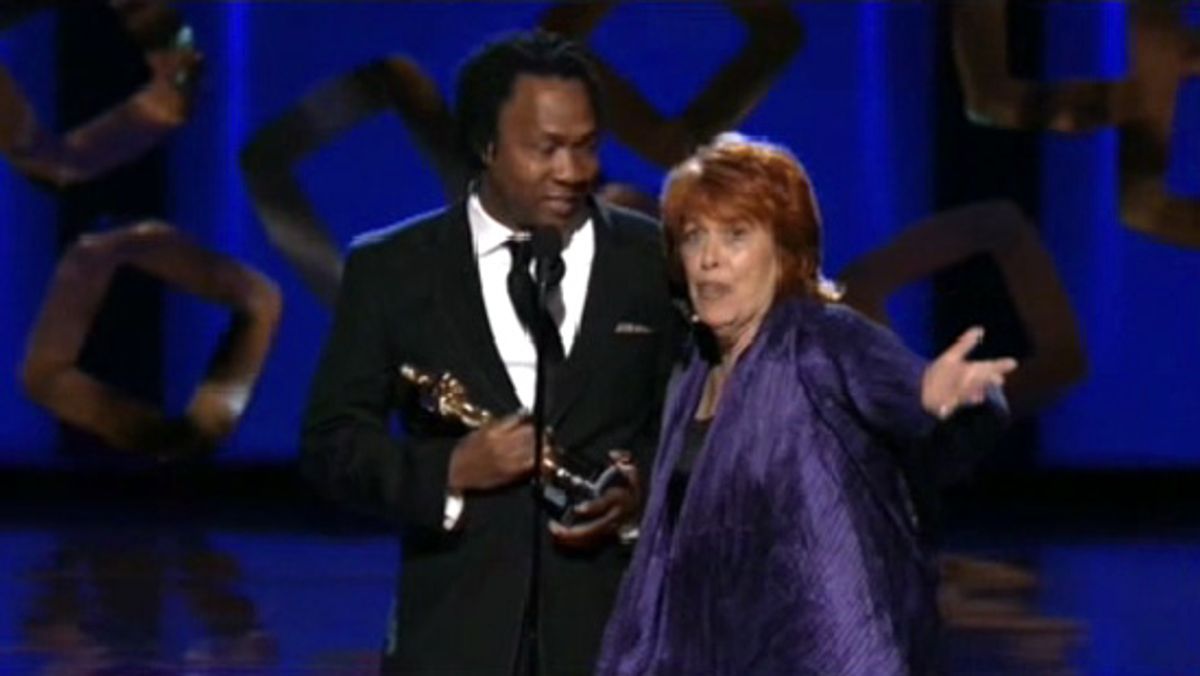 Bigelow vs. Cameron? Streep vs. Bullock? Forget it. The most riveting face-off during Sunday's Oscar ceremony came early: When producer Elinor Burkett wrestled the microphone away from director-producer Roger Ross Williams after their film, "Music by Prudence," won for best documentary short. (Watch the video here, or at the end of this piece.)

What really happened? We reached both shortly after by cell phone, and got both sides of the story. We first reached Burkett – a onetime Salon contributor who spends much of her time in Zimbabwe – as she took a smoking break as the proceedings continued inside:

People are already saying you "pulled a Kanye." What happened?

BURKETT: What happened was the director and I had a bad difference over the direction of the film that resulted in a lawsuit that has settled amicably out of court. But there have been all these events around the Oscars, and I wasn't invited to any of them. And he's not speaking to me. So we weren't even able to discuss ahead of the time who would be the one person allowed to speak if we won. And then, as I'm sure you saw, when we won, he raced up there to accept the award. And his mother took her cane and blocked me. So I couldn't get up there very fast.

Can you explain the reason behind the conflict?

BURKETT: The movie was supposed to be about the entire band, Liyana. And the [band members] were very clear they did not want to participate if it ended up being just about one person. The director and HBO decided to focus solely on Prudence . . .

And that led to the rift. But didn't you see him at other events to discuss what would happen if you won?

BURKETT: He won't talk to me! This whole week, there have been events thrown by the International Documentary Association, and he hasn't passed any of the invitations on to me.

The movie was my idea. I live in Zimbabwe. Roger had never even heard of Zimbabwe before I told him about this. And you know, I felt my role in this has been denigrated again and again, and it wasn't going to happen this time.

How do you feel about the final product?

BURKETT: The final product, it's not that it's bad. It's not what I envisioned when I came up with this project. And it's not what we promised the boys in the band. It's just not what we wanted it to be.

About 15 minutes later, Salon reached director-producer Roger Ross Williams by cell phone as he celebrated backstage with family and friends. We asked for his side of the story.

How did that happen?

WILLIAMS: Only one person is allowed to accept the award. I was the director, and she was removed from the project nearly a year ago, but she was able to still qualify as a producer on the project, and be an official nominee. But she was very angry -- she actually removed herself from the project – because she wanted more creative control.

But couldn't you decide ahead of time who would speak?

WILLIAMS: That was handled by the publicist for the academy. I don't know what they told her. The academy is very clear that only one person can speak. I own the film. She has no claim whatsoever. She has nothing to do with the movie. She just ambushed me. I was sort of in shock.

You seemed to run up there pretty fast. Didn't you see her coming up the aisle? What did you think was going to happen when she got there?

WILLIAMS: I just expected her to stand there. I had a speech prepared.

She claims she found the movie's story, that she brought it to you.

WILLIAMS: No, not at all. The truth is that she saw the band perform [in Zimbabwe], and told me about that, and then I opened up a dialogue with the [King George VI School & Centre for Children with Physical Disabilities] school and went on my own – which you would've heard about in my speech -- and spent $6,000 going to Africa shooting myself. And when people expressed interest in the film, I asked her to come on board. And then I regretted that decision. Then she sued.

It was quite a tussle. Does this diminish the Oscar at all?

WILLIAMS: Absolutely not. It's such a career achievement, to win an Academy Award. This is what the business is. There are times when there's disagreement and dispute and you always hope that people will rise up to the occasion. It doesn't diminish it. She disowns it and doesn't want any part of the film. I'm so proud of the movie .

OK, did your mother try and block her with her cane?

WILLIAMS: My mother got up to hug me. And my mother is 87 years old. She was excited.

What are people saying about it?

They're saying it looked like she pulled a Kanye.

WILLIAMS: She did! She pulled a Kanye. And it's a shame, because this is such positive, happy film.