Tracy Flick beats out the King of the World!

Our expert panel debates the Oscar winners, beats up on the ceremony and grieves for the future of indie film 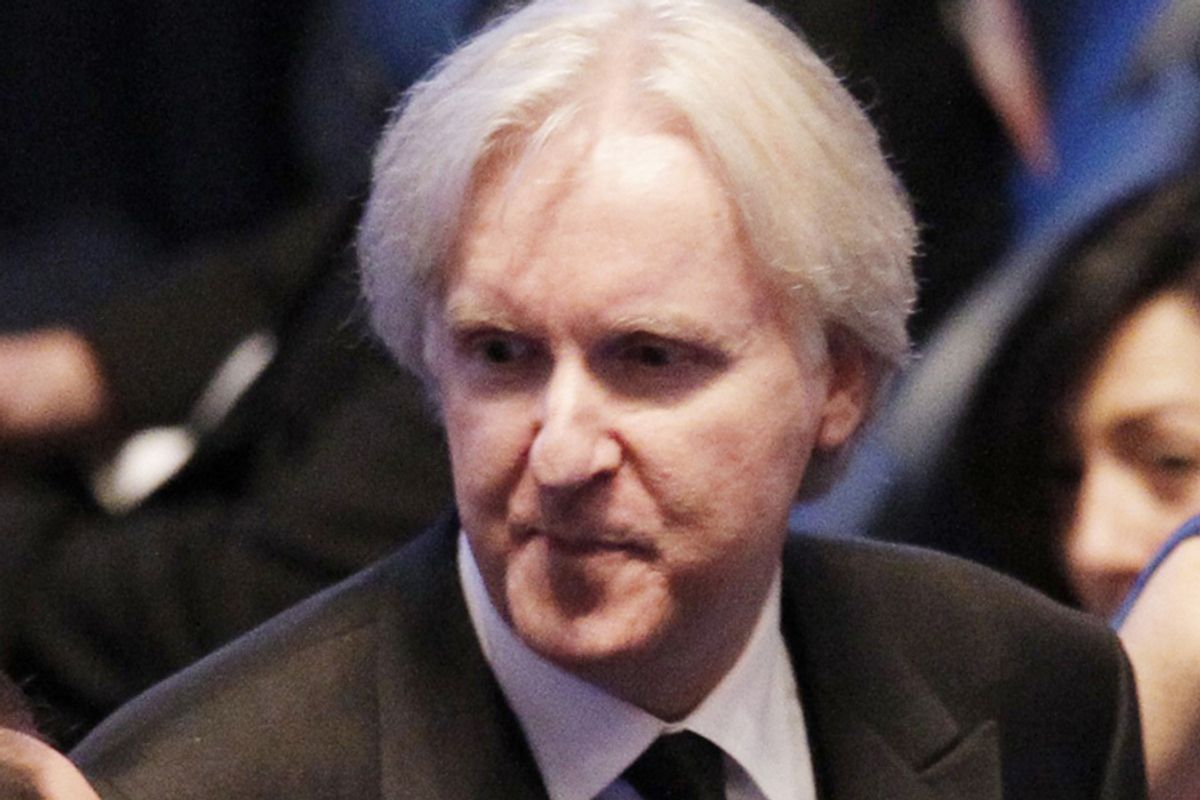 James Cameron at the Academy Awards ceremony on Sunday.
--

The best part of the Oscars isn't watching the ceremony -- it's arguing about it afterward. We asked Film Salon panelists to weigh in with their takes on the evening's controversies.

Two films went head to head last night. One was the ultimate "indie"; it redefined how people look at movies, brought the world back into theaters, pushed the technological boundaries of the art form in a way not seen since D.W Griffith perfected the "close-up" and was a passionate labor of love by its creator, who bent the studio system to his will in order to make it. The other was a queasily immoral war movie that had the audacity to turn a human tragedy into a "Call of Duty"-style video game, full of by-the-numbers "should I cut the red wire or the yellow wire" sub-James Bondian plot manipulations completed by a staggeringly predictable and glib ending. (OK, both contenders suffered from "endingitis," but whatever.)

If the Oscars actually meant anything of consequence, last night's verdict would be tragic. But they don't, haven't ever, and this is example 753 (approximately, your results may vary) of why.

In essence: The one year the academy awards the plucky underdog "indie," it is the wrong "indie," in the wrong year.

But should we expect anything more? The Oscars are, as ever, a shabby high school popularity contest and a new, soon-to-be-forgotten head of student council has just been elected: Long live the King of the World. He wuz robbed by Tracy Flick.

Erik Nelson is the director of the Harlan Ellison documentary "Dreams With Sharp Teeth," and the producer of Werner Herzog's Oscar-nominated "Encounters at the End of the World," along with other films and TV programs.

"The Hurt Locker": Far superior to "The Deer Hunter"

It was a terrible program, but I'm happy about the awards. Politically speaking, supporting "The Hurt Locker" certainly beats the support given to an atrocity like "The Deer Hunter" or even the recognition given to "Hearts and Minds" that should have gone to "Winter Soldier" two years earlier or "In the Year of the Pig" six years earlier. The clear boost given to serious and relatively independent work over studio fluff is a decided improvement over the usual Academy taste.

Jonathan Rosenbaum is the longtime film critic for the Chicago Reader and the author of "Essential Cinema," "Movies as Politics," "Discovering Orson Welles" and other books.

Last night's Oscars were so dull and out of step with the present that I could barely keep my eyes open. It took me back to my youth, when I could never stay awake watching them.

The opening number felt like a high school spoof of the Spirit Awards. Shouldn't a celebration of art and entertainment aim to contextualize all that is great about this Dream Factory? OK, if they can't figure out how to do that, I would be fine with several hours of crass puns like the song-and-dance intro promised -- but no. We get four hours of dullness instead. The fun of the show becomes critiquing all the mistakes.

There should be a semiotics class devoted to the moment when Kathryn Bigelow won best director. First Barbra Streisand hogged the spotlight by not announcing Bigelow's name but instead taking the moment for herself to announce that history had been made. And then the show's directors had the gall to play "I Am Woman, Hear Me Roar" in the background?! I guess they wanted to show they had balls. She so deserved it, they knew she would win, and they come up with something "cute" and antiquated to comment on it? I may be an old white straight guy, but the show gave my group a bad name.

Most of all, the Oscars felt like a nightmare. 2010 will be remembered as the year the indie film infrastructure truly collapsed, yet -- again! -- indies took every possible award for which they were viable. The lack of a support structure or financial model for the majority of these films will be what prevents subsequent sweeps in the years ahead. Since the indie way produces superior creative work, you'd think Hollywood would make it a priority to find a way to keep indie films alive. Whether it be fair acquisition fees, accounting to encourage sustainable-equity investment, producer overhead deals, or just trust in their collaborators, it would be nice if something was left of the old ways to give hope for indie film's future. Instead, I can't help but suspect the Powers That Be must resign themselves to the fact that if they want studios to win Oscars again, they have to kill off indies completely. I think I heard the hammer hitting the nail of indie's coffin last night. Here's hoping I am not buried in it.

Ted Hope is the producer or executive producer of many films, including "Adventureland," "Friends With Money," "American Splendor" and "In the Bedroom." He blogs at Truly Free Film, where an earlier version of this post first appeared.

The show seemed incredibly misguided. They had an impressive opening production number from hosting pro Neil Patrick Harris ... and then didn't have him host. They tried pandering to a younger demographic by getting Kristen Stewart, Taylor Lautner, Miley Cyrus and Amanda Seyfried to show up ... and recite the same canned patter as presenters twice their age. They mounted a tribute to horror films ... filled with movies that stretch the definition of "horror," and with virtually no acknowledgment of the accomplished horror films of 2009. They rushed through the best song nominees without performances ... but made time for wholly mismatched dance numbers to the nominated scores. I spent the whole ceremony baffled by the producers' choices.

Josh Bell is an editor at Las Vegas Weekly.

The gawdy spectacle turns out to be ... discerning?

There was a kind of pseudo nightclub atmosphere, but the attempt at intimacy never works. Everyone's just a little too stiff. And the whole thing is undone by the eclecticism of trying to please so many different constituencies. But the willingness to give so many awards to "The Hurt Locker" made up for a lot. Not just best picture and director but also best sound and screenplay, almost bafflingly discerning. And I did love the merging of actual screenplays with the scenes described.

Molly Haskell is an author and critic. Her books include "From Reverence to Rape: The Treatment of Women in the Movies," "Frankly My Dear: 'Gone With the Wind' Revisited" and the memoir "Love and Other Infectious Diseases."

"Avatar" is a phenomenon, not a work of art

I’ve had a strong personal and critical affinity for Kathryn Bigelow since "Near Dark." Her kinetic, abstract and lyrical style of action filmmaking is something to behold.

I saw the second public performance at Toronto about 18 months ago, and I thought it was an intelligent, gripping, extraordinarily vivid style of filmmaking. I hope it encourages people to look at Bigelow's earlier work (and finally get good DVD transfers of "Near Dark," "Blue Steel" and "Strange Days.")

"Avatar" is a phenomenon, but it’s seriously flawed and problematic as a work of movie art, and it didn’t deserve to win the best director or best film prize. I have serious problems with it winning for best cinematography. Don’t get me wrong, I think Mauro Fiore is a very talented cinematographer who’s very good at capturing motion and activity. But so much of the visual design is a production of computer graphics, animation art and other hybrid technology, it’s a bit of a stretch to give the award for that.

The most appalling part, though, was the manner by which Roger Corman and Gordon Willis got seriously shortchanged, their contributions not properly acknowledged. Corman is a significant artist, a talented filmmaker in his own right, who is largely responsible for the careers of such varied and imposing directors as Francis Ford Coppola, Peter Bogdanovich, Jonathan Demme, Ron Howard, Jonathan Kaplan and John Sayles (those are the ones who immediately come to mind).

Willis shot Coppola’s "Godfather" trilogy and Woody Allen’s major artistic breakthroughs, "Annie Hall" and "Manhattan." It just seems wrong on so many levels to downplay their historical and cultural accomplishments, and not give them a chance to be heard or really even seen.

As happy as I was, to a point, about the awards, there was very little excitement or drama in the presentation; it had no real structure or identity, beginning, again, as a kind of ersatz Vegas dinner show and going downward. The writing was largely bloodless and stale; the television direction was also very uninspired. I was struck by how little energy was present.

Patrick Z. McGavin is a freelance critic and blogger.