The comedian follows a stranger on the social networking site, and for once, that sudden fame is used for good 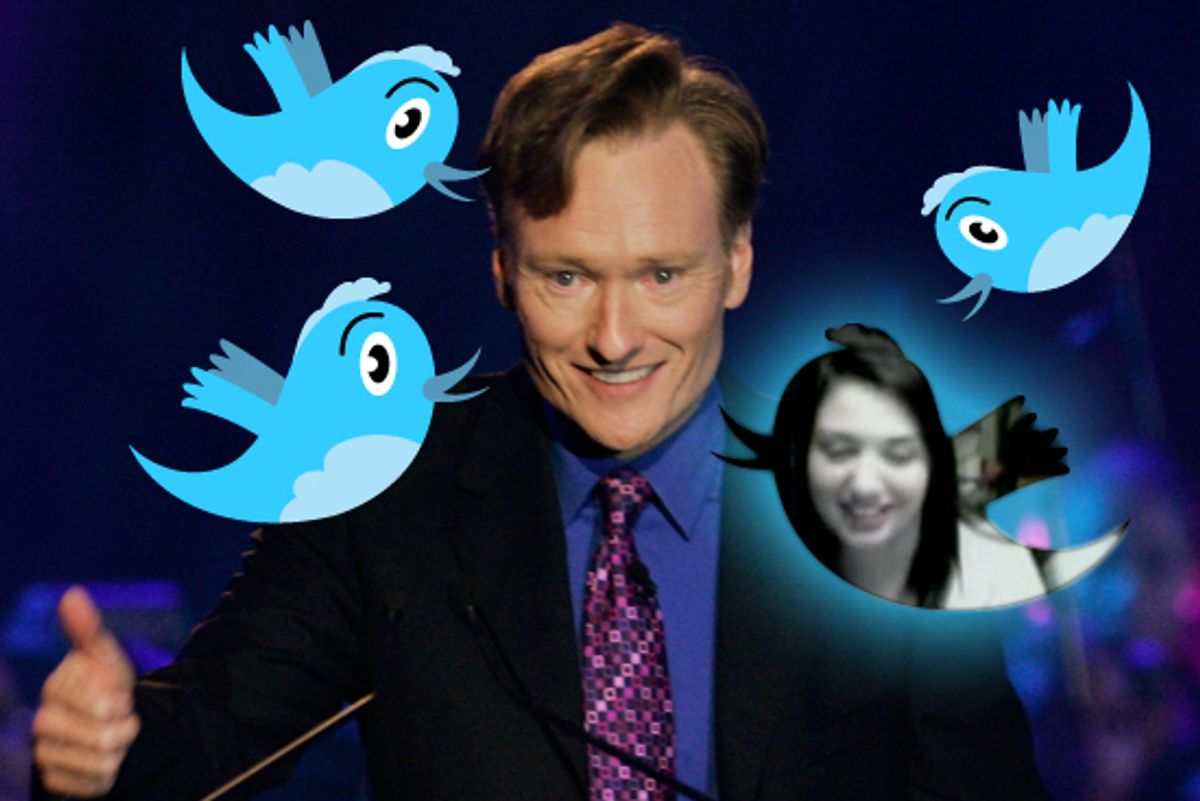 When Conan O'Brien says that your life is about to change, believe him.

The unemployed late night talk show host, finding himself with some time on his hands, joined Twitter last month -- and soon found himself amassing a devoted horde of followers (and possibly creating a few hilarious spinoff accounts). On Friday, he returned the favor a little. "I've decided to follow someone at random," he wrote. "She likes peanut butter and gummy dinosaurs. Sarah Killen, your life is about to change."

Sure enough, it did. In mere days, the woman known on Twitter as LovelyButton has found her own ranks of followers swollen to 18,587 and counting -- up from a previous total of three (including a few that seem suspiciously Coco-flavored). And because the world loves an instant celebrity, she's been interviewed on MTV, the Los Angeles Times and New York magazine. The budget-challenged 19-year-old has already also raked in a new iMac, the promise of a custom-made wedding gown from Kelima K for her forthcoming nuptials and lots of other swag. Jackpot!

At a moment like this, a girl suddenly in the spotlight might be expected to turn into a real douche. Who'd have raised an eyebrow if she flaunted her ignorance on a talk show, plowed into the nearest telephone pole or embarked on an ill-fated hookup with John Mayer? But what Killen -- and her new friends -- have done instead is rather extraordinary.

Before the fateful O'Brien connection, Killen and her mother had been setting up a sponsor page for the Michigan Susan G. Komen Race for the Cure for breast cancer. Mere hours afterward, Killen posted a link on Twitter to her new donation page. By the next day she'd raised almost a thousand dollars. She's currently closing in on $3,000.  And amid the outpouring of attention, she's emerged as a young woman of remarkable grace and gratitude, cheerfully posting, "Thanks for brightening my day!" and encouraging followers to sponsor her mom's Komen race as well. "It's awesome," she told Tonic.com. "I was afraid we wouldn't even be able to raise that much money for months."

Killen's altruism has had a domino effect. That freebie wedding dress she scored? Kelima offered it  to her in exchange for promoting their own favorite cause, the Children's Hunger Fund.

Sure, there's a pleasure in the fame of it all for her, too. Killen admits her "dream" is to be on "Chelsea Lately" (hint to Killen: Get better dreams) and that her fiancé would like Conan to be his best man. But there's something lovely and breathtakingly generous about someone with newfound notoriety leveraging into something other than just more notoriety. Conan may have chosen her at random, but it turns out his one Twitter friend was an inspired choice, setting off ripples of kindness in the direction of breast cancer research and children in need. In the midst of random 140 character observations about gummy dinosaurs, sometimes, lives really do change. Killen's was just the start.