Confessions of a terrorist sympathizer

A volunteer attorney for Guantanamo detainees comes clean: You got me, I'm shilling for al-Qaida 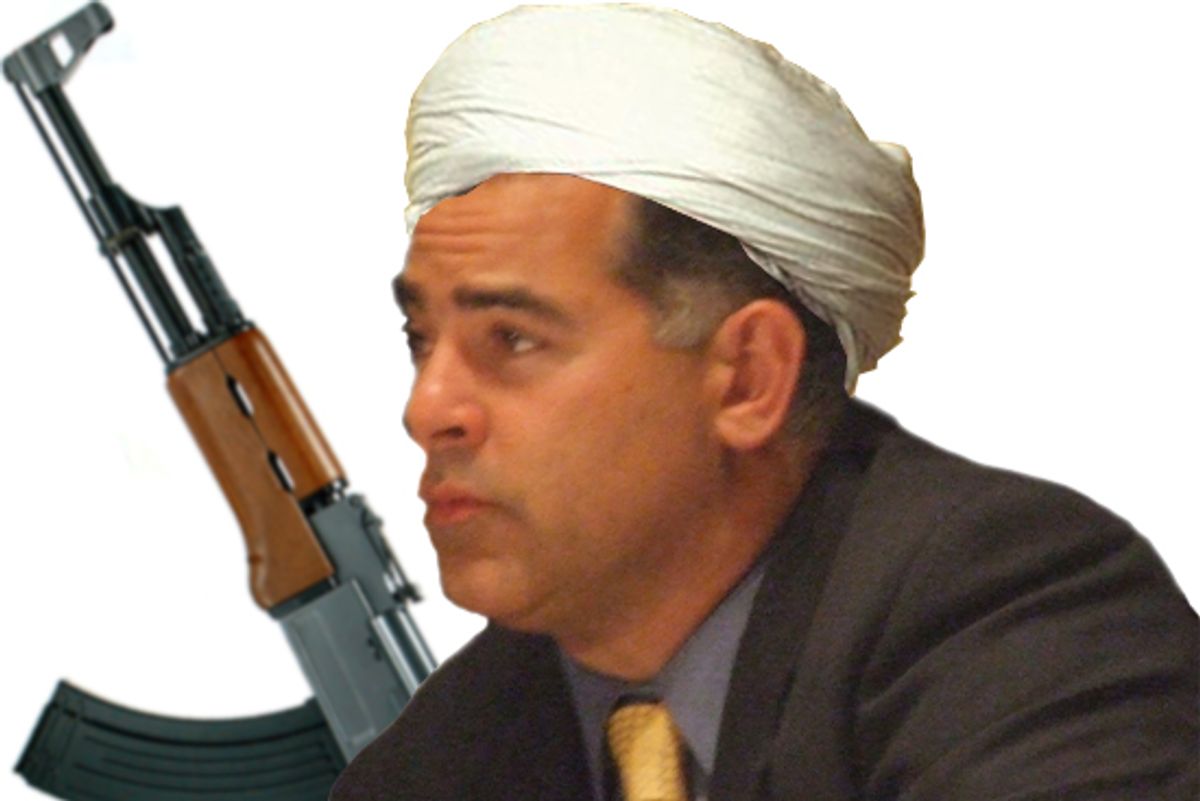 What you might have seen: Last Thursday night, Rachel Maddow exposed a group of al-Qaida sympathizers who had served as lawyers on behalf of Guantánamo detainees, revealing that these pro-terrorist attorneys have not only taken over the Department of Jihad (previously known as the Department of Justice) but have even infiltrated our armed forces. One of the military lawyers identified on the broadcast was Air Force Reserve Lt. Col. David Frakt, who served as a defense lawyer for Guantánamo detainees in 2008 and 2009.

What you missed : On Friday, Lt. Col. Frakt agreed to an exclusive interview with Maddow. But shortly after the interview was taped, federal agents, sporting a secret warrant from the FISA Court, forced their way onto the set and confiscated the video footage, citing national security. Fortunately, one of the technicians secretly recorded the interview on his iPhone, which is how Salon obtained the following transcript:

Maddow: Lt. Col. David Frakt is a JAG officer in the U.S. Air Force Reserve and a law professor in California. Professor Frakt, welcome back to the program.

Frakt: Happy to be here, Rachel.

Maddow: Is it true that you’re a terrorist sympathizer?

Frakt: Yes, Rachel. That’s why, in 2008, I volunteered to represent detainees at Guantánamo. The chance to actually be a U.S. government-paid spokesperson for al-Qaida under the guise of "promoting fairness, justice and the rule of law" was just too delicious an opportunity to pass up. I figured the military commissions at Guantánamo would be the perfect soapbox for me to espouse my terrorist ideology.

Maddow: And did your position as a defense counsel give you the opportunities that you were seeking?

Frakt: Not exactly, Rachel. The whole experience was a bit disappointing. Initially, things looked very positive. The first detainee I was assigned to represent, Ali Hamza al Bahlul, was a member of Osama bin Laden’s inner circle and a very committed al-Qaida member. In fact, he has been frequently referred to as the al-Qaida minister of propaganda. So, I thought I’d hit the jackpot.

Maddow: So why didn’t it work out?

Frakt: Well, sadly, Mr. al Bahlul wouldn’t cooperate. He refused to let me represent him in court or speak on his behalf. He said he didn’t trust me because I was an American military officer. In fact, he basically boycotted the proceedings and ordered me to do the same. Can you believe that?

Maddow: That must have been very frustrating for you. Didn’t you also represent another client, a juvenile?

Frakt: Yes, I did represent another young Afghan named Mohammed Jawad, but he was a big disappointment also.

Frakt: Well, as it turned out, he wasn’t a member of al-Qaida, or even the Taliban. In fact, he wasn’t a terrorist at all. He didn’t even know any terrorists! The only real consolation with Mohammed was that the United States had tortured him, so I was able to exploit that for substantial propaganda value, but otherwise, he was a dud.

Maddow: What happened to him?

Frakt: Unfortunately, after I proved that his confession was the product of torture and that he was innocent, he was ordered released by a federal judge. I’m pretty sure she is a terrorist sympathizer as well. In fact, your viewers may be interested to learn that all the judges on the Federal District Court bench in Washington are part of one big al-Qaida sleeper cell.

Maddow: How do you know this?

Frakt: Well, it’s obvious, Rachel. What other explanation is there for the fact that they’ve granted habeas corpus petitions and ordered the release of 33 detainees out of the 44 cases they’ve heard?

Maddow: Could it be that the government didn’t have sufficient evidence?

Frakt: Don’t be naive, Rachel. They’re obviously fellow al-Qaida sympathizers. The only reason they don’t let them all go is they don’t want to blow their cover.

Maddow: I see. One final question, professor Frakt. In your previous appearances on the program, you were in uniform; why aren’t you in uniform today?

Frakt: Well, after I actually won a case at Guantánamo, the Pentagon didn’t want to give me any more cases, so I was forced to leave active duty and return to my civilian position as a law professor.

Maddow: And how is that going?

Frakt: It’s not so bad. At least in this position, I can indoctrinate the impressionable young minds of the next generation of lawyers with my pro-terrorist views, while getting paid to churn out pro-terrorism "scholarship." Academic freedom has its advantages, although I’m obviously opposed to it for those with differing viewpoints. If I didn’t have to grade papers, this would be the perfect job. Fortunately, I have teaching assistants for that.

Maddow: Well, we appreciate your taking the time to be on our program this evening.

Frakt: Any time, Rachel. I’m always glad to have any opportunity to advance my pro-terrorist agenda.

David Frakt is a lieutenant colonel in the Air Force Reserve who has defended Guantanamo detainees Mohammed Jawad and Ali Hamza al-Bahlul in front of military commissions.

David J. R. Frakt is an Associate Professor at Western State University College of Law in Fullerton, California and a Major in the U.S. Air Force Judge Advocate General's Corps Reserve. He has served as defense counsel for Guantanamo detainees since April 2008, including juvenile Mohammed Jawad, ordered released by a federal judge in July.