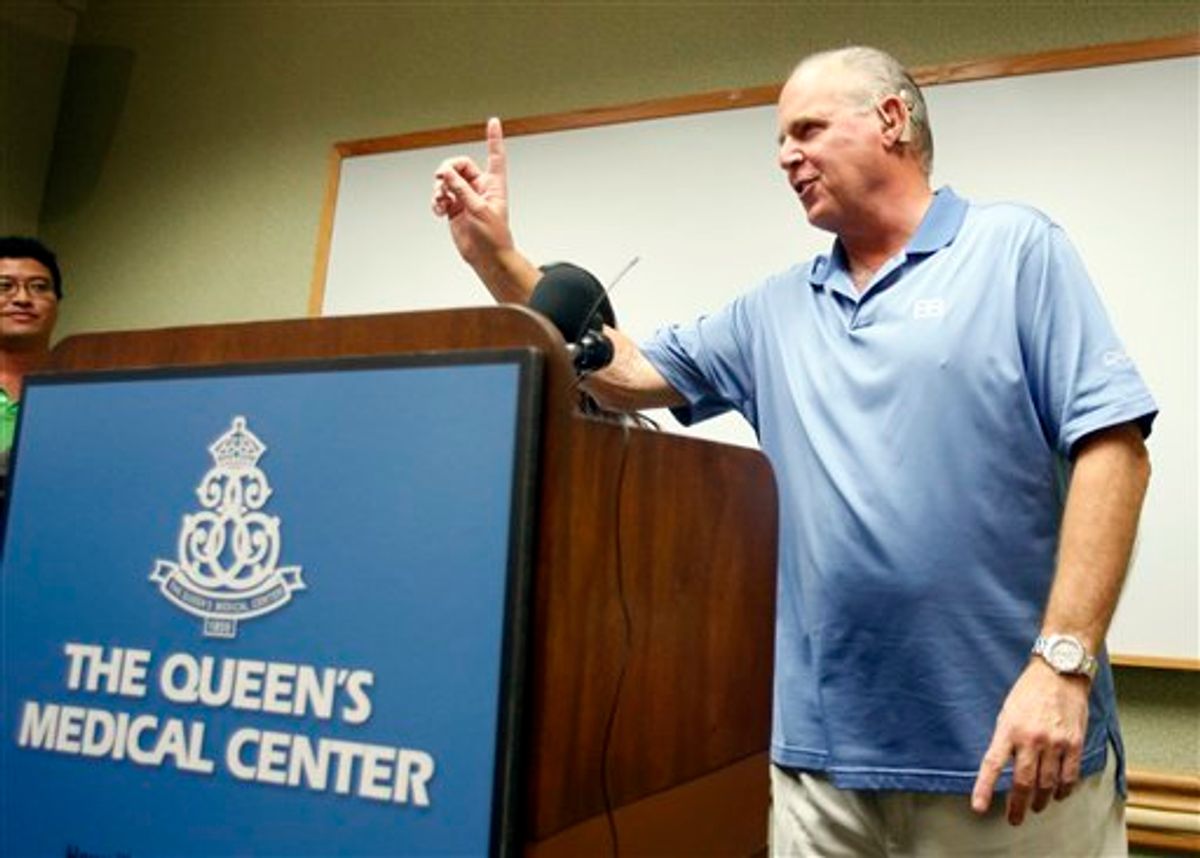 Meet Rush Limbaugh: the latest blowhard to learn nothing from history, thereby fating himself -- and his flock -- to repeat it.

Rush was on the air back in 1993 and 1994, when Republicans found themselves in essentially the same position they’re now in: locked out of the White House and staring up at imposing Democratic majorities in the House and Senate.

With Rush egging them on, they defined themselves by their blanket, loud, and often hysterical opposition to Bill Clinton’s agenda (and to his legitimacy as commander in chief). They killed his stimulus bill by filibuster, offered zero votes for his first budget (the one that set the stage for the economic prosperity -- and balanced budgets -- of the late '90s), and demagogued healthcare reform until an utterly defeated Clinton pulled it from the agenda.

And for their willful obstruction and fear-mongering, the Republicans were rewarded with an electoral tsunami in the 1994 midterm elections, one that handed them control of Congress for the first time in decades. And it was only supposed to be the beginning: Two years later, Clinton himself would be on the ballot (well, if Democrats didn’t dump him first), and then the real fun would begin.

But that never came to pass, and surely you remember why: The Republicans who won in '94 mistakenly believed that Americans had ratified their right-wing philosophy, when voters had simply been using the GOP as a protest vehicle. When 1996 rolled around, the economy was stronger (thank you, 1993 budget), the Republicans' brand was tarnished (voters came to loathe the Gingrich Congress), and Clinton was again able to charm the country with his sunny demeanor.

The story of Clinton’s first term, in other words, is the story of the difference between midterm and presidential elections. You might think Limbaugh, having lived and broadcasted through it, would appreciate this. Apparently not.

On his radio show on Tuesday, he took after me for something I’d said on "Hardball" on Monday -- namely, that "the party of Sarah Palin, the party of Rush Limbaugh can win in 2010, but that same party can’t turn around and win in 2012." Limbaugh played a clip of me (the full video from "Hardball" is below) and then replied:

This guy is supposedly some brainiac at Salon.com. I don’t know how the Republicans can take victory in 2012 (SK: I think he meant 2010) as a vindication of their strategy when there isn’t one. What’s happening here is, Mr. Kornacki, is that independents and Democrats are running as far away and as fast as they can from Obama. And Obama’s still going to be there in 2012. (Laughs) He’s still going to be there. What this guy’s trying to say, 'You Republicans, don’t think conservatism’s going to win for you, ‘cause that’s not going to win for you….'

First, he’s wrong: The GOP clearly has a strategy right now, and it’s evident with every Senate filibuster, every "no" vote on healthcare, and every denunciation of the stimulus. Today’s Republican Party is treating the Obama administration just like the Republican Party of the 1993 and 1994 treated the Clinton White House. The strategy is to say no to everything and to benefit from the buyer’s remorse nature of midterm elections, which (as I noted on "Hardball") should be particularly apparent this fall, with joblessness near or above 10 percent.

Second, I’m well aware that Obama’s still going to be there in 2012. And it’s exactly why I’m so bullish on his reelection prospects. If recent presidential history has established anything, it’s that the political turmoil Obama is now enduring was essentially inevitable. There have been five presidents in the modern, "permanent campaign" era of American politics, and Obama is the third to reach this same low point in Year Two of their first terms. Clinton and Ronald Reagan were the others, and both, not at all coincidentally, rebounded to win second terms.

The Clinton and Reagan comebacks provide very important lessons for those who would write Obama off right now -- and for those who would read the GOP’s bright 2010 prospects as much more than a predictable reaction to double-digit unemployment and single-party control of the White House and Congress.  (I wrote much more about the parallels between '82, '94 and the present day -- and why they portend well for Obama’s '12 prospects -- here.)

The point I was making on "Hardball" is that the GOP is doing itself no long-term favors by blindly rejecting and obstructing Obama and by defining itself as Rush Limbaugh’s party. It won’t hurt them much in 2010. Midterm elections, by nature, just aren’t about the party that’s out of power. But presidential years are different. And, especially if the economy is showing signs of life, the GOP is positioning itself to pay dearly in 2012 -- just as Bob Dole paid dearly in ’96 and Walter Mondale did in ’84.

Oh, and I’d be remiss if I didn’t point out one more thing that Rush screwed up. That thing about me being a "brainiac" -- well, as more than a few friends have already made sure to tell me, he’s wrong there, too.