Obama sabotages himself with fake "pragmatism" 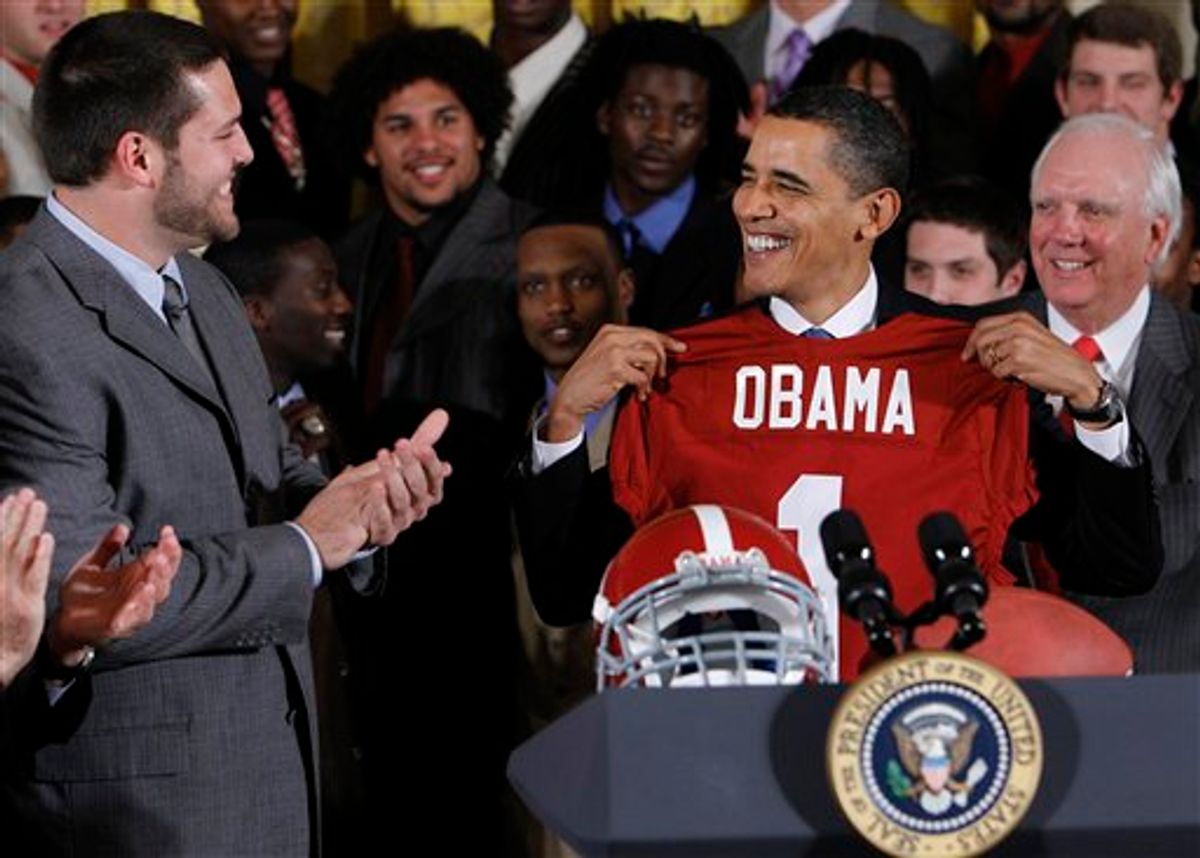 A new poll from the Democratic polling firm founded by James Carville and Stan Greenberg -- and co-sponsored by the "centrist" Third Way -- provides what its sponsors call "a wake-up call for President Obama, his party, and progressives on national security," because "[h]istorical doubts about the Democratic Party on national security show signs of reviving."  This "Dems-losing-on-Terrorism" characterization is predictably being adopted by most media accounts -- Poll: Obama wrong on terror suspects and Poll shows Obama, Dems losing ground -- and will almost certainly accelerate (and provide the excuse for) the administration's abandonment of the very few decisions where they deviated from Bush/Cheney Terrorism policies.  The reality of the poll is far more mixed than is being depicted -- the public believes Obama is doing better than Bush on national security generally and specifically on the handling of Terrorism, and Obama's national security approval ratings remain far higher than any other category -- but it is true (at least according to this poll) that Americans have increasingly sided with the Cheneyite-GOP argument on specific civil liberties/Terrorism questions, including civilian trials v. military commissions.

All of this underscores a vital point:  the Obama White House is hamstrung by its own embrace of the Bush/Cheney Terrorism template in advocating for its own policies.  The pollsters' Memo stresses, for instance, that the primary justification Obama officials offered in defending their Mirandizing of the attempted Christmas Day bomber -- Bush did it too with Richard Reid -- is ineffective and makes them appear "weak":

How can this response be anything other than weak and muddled?  Democrats generally and Obama specifically have spent years telling the country that Bush/Cheney Terrorism policies were lawless, immoral, inept and counter-productive.  Yet the minute there's a controversy over Obama's Terrorism policy, his first justification is:  we're only doing what Bush and Cheney did.  He can't stand on his own two feet and forcefully justify civilian trials or Mirandizing Terrorist suspects; he has to take refuge in the fact that Bush also did it -- as though that proves it's the right thing to do, because Bush/Cheney is the Standard-Bearer of Toughness on Terrorism.  If you're going to embrace the core Bush/Cheney model on Terrorism and point to what they did as though that's the guide for how things should be done -- and if you're going to run to them for refuge and protection -- and if you're going to reverse yourself and capitulate at slightest sign of political pressure (FISA, detainee photos, civilian trials) -- is it really any surprise that people will begin to conclude that Bush and Cheney had things basically right and that Democrats are"weak" (not because of specific policies, but because of their fear of arguing for and sticking with their own positions)?

This is the same point made, albeit in a different form, by Stanley Fish in today's New York Times, who argues that there is a growing nostalgia for George Bush among many media figures and the country generally (which, at least with regard to media elites, I've noted before as well; there's zero evidence it's true of the public generally, and Fish's attempt to prove otherwise is unbelievably lame).  Still, today's poll proves the public is far more receptive than before to arguments coming from the Cheneyite faction, and Fish, persuasively, points to this as a major reason why:

Bush’s policies came to seem less obviously reprehensible as the Obama administration drifted into embracing watered-down versions of many of them. Guantanamo hasn’t been closed. No Child Left Behind is being revised and perhaps improved, but not repealed. The banks are still engaging in their bad practices. Partisanship is worse than ever. Obama seems about to back away from the decision to try 9/11 defendants in civilian courts, a prospect that led the ACLU to run an ad in Sunday’s Times with the subheading “Change or more of the same?” Above that question is a series of photographs that shows Obama morphing into guess who -- yes, that’s right, George W. Bush.

I wish everyone would read that first, bolded sentence every day.  This is a point I've been trying to make in different ways for many months.  It is obviously impossible to maintain that the Terrorism and other national security policies of George Bush and Dick Cheney were radical, heinous, evil and wrong if the successor administration -- one from "the other party," filled with people who spent years vehemently condemning those policies -- end up adopting most of those same policies and the core approach itself.  Inevitably, that behavior will come to be seen as vindication (now that Obama is in office, he sees those policies are necessary), and worse, converts what had been viewed as extremist, highly controversial right-wing policies into unchallenged bipartisan consensus.

It's only natural that many people in the country say to themselves:  how bad could George Bush and Dick Cheney really have been in these areas if their core policies are being adopted by Obama?  Apparently, there must not be anything wrong with indefinite detention, military commissions, renditions, state secrets, etc. because Obama has embraced them as well.  And once those conclusions are fostered, it's hardly a surprise that Bush officials such as Dick Cheney will once again be listened to as a credible authority on such matters; if he, after all, had the basic approach right, why deviate from it at all?

Independently, and even more important, think about how rhetorically difficult it is for the Obama administration to defend civilian trials when they themselves are subjecting scores of detainees (in fact, most) to military commissions or indefinite detention.  It's a completely confused, unprincipled, self-negating approach that can only produce muddled, unprincipled and therefore weak defenses.  Nobody in the administration can possibly argue (as Democrats used to vocally argue) that military commissions, indefinite detention and denial of civilian trials are un-American and counter-productive, because the Democratic administration is now doing exactly that.  So if you can't argue that, how can you possibly defend civilian trials, or rebut the GOP claim that accused Terrorists should be placed before military commissions or indefinitely detained?  You can't -- you have no argument -- and that's why Obama is losing this debate.

There's a difference -- a fundamental one -- between (a) being pragmatic in trying to implement one's principles and (b) having no principles at all and and glorifying that unanchored emptiness as "pragmatism."  Once you enter the realm of (b), you are not only guilty of having no principles (a sin in its own right), but you're incapable of finding a way to effectively justify what you're doing, because you have no coherent principles to which you can credibly appeal.   In virtually every realm (health care, financial reform, national security), and especially in Terrorism/civil liberties, that has been the great political failure of the Obama administration.

I spoke at NYU School of Law last week, and in the various questions that were asked, these are the issues that were raised repeatedly.  I'll post a couple of the relevant excerpts in just a few minutes.

UPDATE:  Here are several 3-5 minute excepts from the NYU Law School event I did last week, moderated by NYU Law Professor Stephen Holmes, that are relevant to this discussion:


On civilian v. military tribunals and the "Soft on Terror" attack:


On the prospects of winning these debates:

This was a really great event -- virtually all smart and probing questions -- and so I'll try to post the rest of the excerpts elsewhere a bit later today.

UPDATE II:  All of the video clips from the NYU event are now posted, here.