Help save the Census from right-wing attacks

Conservatives denigrate one of the country's only truly universal institutions, just before the 2010 forms go out 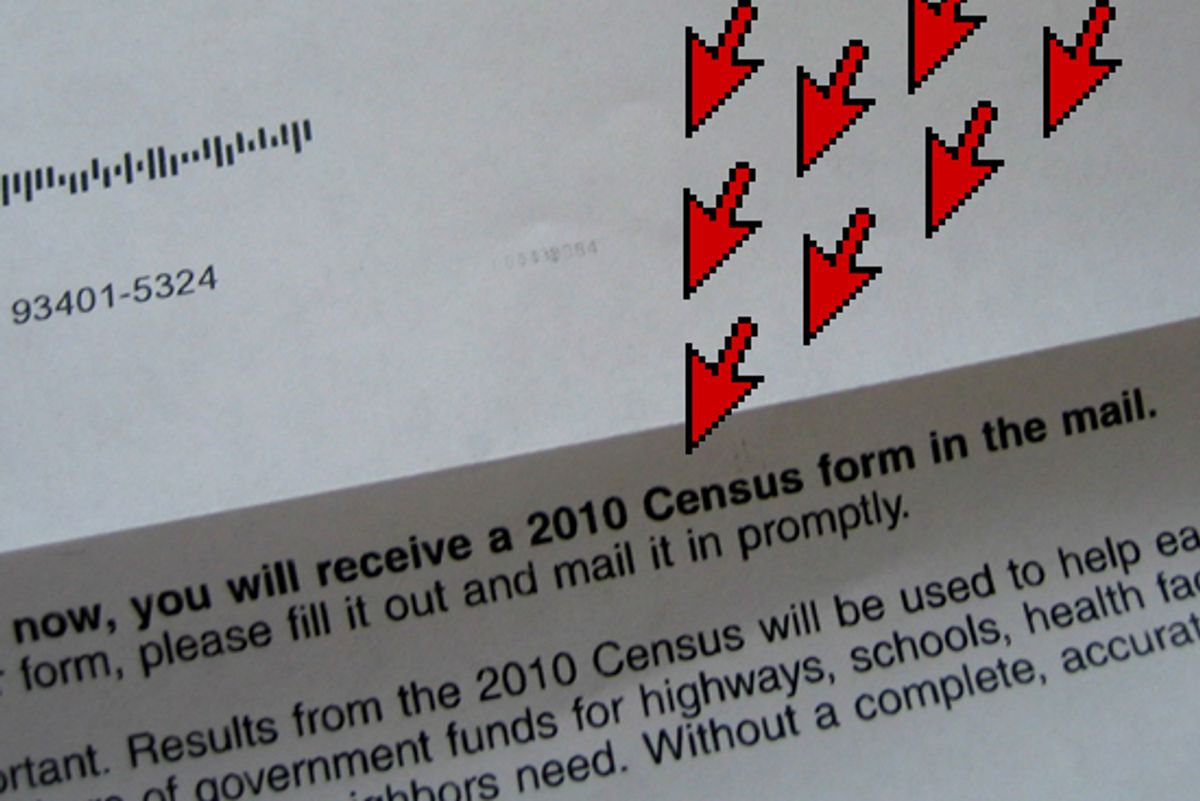 Just about everything the government does these days is -- obviously -- part of some nefarious socialist conspiracy; after all, Barack Obama is president and the Democrats control Congress. But even by the standards of paranoia conservatives have laid out for themselves over the last year, the way the right is responding to the 2010 Census is starting to stand out.

With Census forms set to go out next week, the right-wing outrage over the constitutionally mandated affair is starting to boil over. That's mostly due to two things: one, the continued efforts by the U.S. Census Bureau to get people to fill the damn forms out; and two, the fact that the Census questionnaire actually seeks enough detailed information in response to make the survey meaningful.

The letters most Americans received Monday or Tuesday to alert them to the forms are -- like the Super Bowl ad the Census ran -- not going over too well with conservatives. The letter seems fairly inoffensive:

About one week from now, you will receive a 2010 Census form in the mail. When you receive your form, please fill it out and mail it in promptly. Your response is important. Results from the 2010 Census will be used to help each community get its fair share of government funds for highways, schools, health facilities, and many other programs you and your neighbors need. Without a complete, accurate census, your community may not receive its fair share. Thank you in advance for your help.

But in 2010, where any dollar the federal government spends is, automatically, a dollar that may as well be part of a criminal enterprise, right-wing blogs aren't happy. "I'm having a difficult time deciding if this letter is: 1) Supposed to be helpful or informative in some way. 2) A joke. 3) Some sort of Obama stimulus plan for the postal workers. 4) My imagination," wrote one poster on RedState.com. On Andrew Breitbart's BigGovernment.com, SusanAnne Hiller saw it as a socialist plot. "This form letter has all the characteristics of Obama's 'fair share' and 'spread the wealth around' sentiment because, as we clearly know now, he will return the wealth to its rightful owner -- and it's not the ones who earned it -- because that wouldn't be fair," she wrote. "And it's disturbing that other people's money is used as the bait to motivate people to fill out the census form."

All that is, put simply, nonsense. First, the cost argument. Yes, printing and mailing letters advising people that the Census forms are on their way is expensive. But as Census officials must be getting tired of pointing out, every 1 percent increase in return rates actually saves $85 million later this year. Because when people don't send their forms in, the government has to send an interviewer out to talk to the households in person. Ten years ago, letters like the one that went out this week increased Census participation by 6 percent. Which would translate to a $510 million savings -- and there's no way it costs that much to send out the letter. On top of that, the "fair share" rhetoric that so upset BigGovernment is exactly right. The Census determines how many people live in states, counties and cities. The government, in turn, uses that information in awarding formula-based federal grants and aid. It's not "spreading the wealth around," it's figuring out how many people there are in your city so you get the right amount of federal cash to keep your bridges from falling down.

But conservatives have also launched a more involved project to undermine the actual data the Census collects. Writing on National Review, Mark Krikorian blustered that the whole thing is too obsessed with race, anyway. "Fully one-quarter of the space on this year's form is taken up with questions of race and ethnicity, which are clearly illegitimate and none of the government's business," Krikorian wrote. (Note: That's not technically true. Two of the 10 questions on the short form deal with race or ethnicity, which isn't "fully one-quarter," it's "fully one-fifth.") So instead of answering the question the way it's phrased, Krikorian wants you to play a game, instead. "We should answer Question 9 by checking the last option -- 'Some other race' -- and writing in 'American,'" Krikorian wrote. "It's a truthful answer but at the same time is a way for ordinary citizens to express their rejection of unconstitutional racial classification schemes." There's a Facebook group set up to promote the cause, with a whopping 929 members as of Tuesday evening. (Including some boasting about how their ancestors came to this country on the Mayflower, or suggesting that if "you have to be something else" besides American, "you're not good for this country.")

Of course, the "unconstitutional racial classification" that the Census collects also helps researchers -- by looking at the long forms, which deal with things like employment, health and housing -- figure out whether people of different races are disproportionately poor, or sick, or lacking reliable shelter. Or whether they're happier with their jobs than people of other races. Or whether lots of Filipinos, for example, are moving to a certain city. Or any number of useful bits of information that -- because the Census is by far the most comprehensive survey of American demographics -- simply wouldn't be available if it didn't collect that data.

Which may well be the point. Chances are, anyone who's feeling sufficiently insulted by the Census form to write in "American" for their race would, otherwise, be checking off the first one: "white." (As will I.) The write-in movement would essentially make white the default setting on the Census, by erasing the evidence that any other ethnic or racial groups exist here in the United States. Their decision to self-identify only as "American" isn't really any different from someone else's decision to self-identify as -- in the antiquated words of the Census form -- "Black, African Am. or Negro." But checking off that box is suddenly supposed to be somehow un-American. That same impulse led a bunch of old white men to insist, last summer, that only Latinas could ever bring any preexisting biases to the table as judges.

All the conservative rhetoric about the Census has the effect of denigrating one of the only institutions in America that everyone shares in. (Not surprisingly, they're also not big fans of one of the others, paying your taxes.) It would be marvelous if, one day, what race you were made absolutely no difference in your life in this country. Until then, though, the Census needs the information it collects to help us figure out how to get there. Fill it out as honestly and completely as possible.