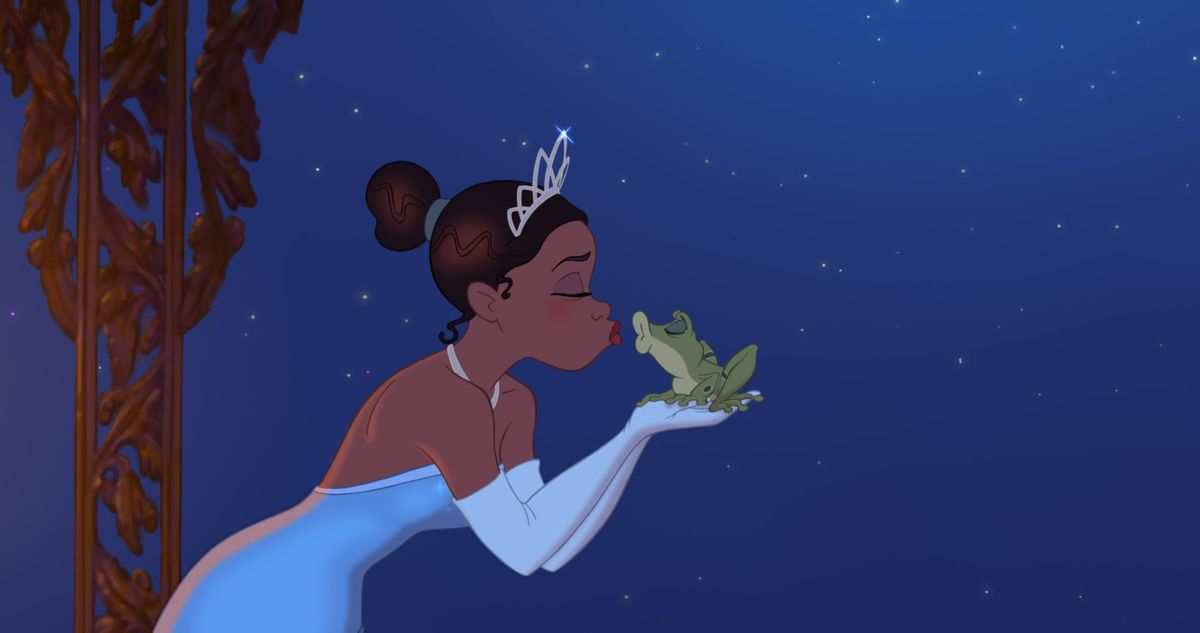 Here's a good news/bad news item for those of us who have concerns about Disney princesses turning little girls into bedazzled pod people: Since its last animated film, "The Princess and the Frog," got a lackluster reception, the company has decided to back away from the P-word. Says the L.A. Times, "[E]xecutives at the Burbank studio believe they know why the acclaimed movie came up short at the box office. Brace yourself: Boys didn't want to see a movie with 'princess' in the title."

But why would you stop at, say, not making another movie with 'princess' in the title, when you could do even more to protect your business from the damning effects of girl cooties? There's more!  "Concluding that it had too many animated girl flicks in its lineup, Disney has shelved its long-gestating project 'The Snow Queen,' based on the Hans Christian Andersen story." And just to be on the safe side, the studio has also "renamed its next animated film with the girl-centric name 'Rapunzel' to the less gender-specific 'Tangled'" and beefed up the male lead.

As delicious as the thought of a less princessy "princess" film may be, Disney's reasoning for it is just as big a feminist bummer as Ariel giving up her voice to get a man. It's the same line we hear about why women can't open films made for grown-ups -- the female market just isn't profitable enough, and men won't go see chick stuff. Never mind that female-driven movies like "Sex and the City," "Mamma Mia" and the "Twilight" franchise have been phenomenally successful in recent years, or that so many of the movies aimed at women are unwatchable schlock, or that no one ever worries about the future of male-oriented films, even when highly anticipated ones fail to perform. Women are an unpredictable niche market that just happens to be slightly over half the population. Deal with it.

So even though I look forward to Disney putting less emphasis on princesses, I'm not thrilled about the fact that that seems to mean putting less emphasis on girls. As Women and Hollywood's Melissa Silverstein said of the "Twilight" films' success, "It shows that female filmgoers can be as rabid in their fandom as male." But weren't Disney animated films traditionally an indication of that, at least where the grade school set is concerned? With the exception of "Aladdin," all of the movies that spawned the ubiquitous coven of "princesses" -- "Snow White and the Seven Dwarfs," "Cinderella," "Sleeping Beauty," "The Little Mermaid," "Beauty and the Beast," "Pocahontas," "Mulan," and "The Princess and the Frog" -- are categorically wee-chick flicks. Even if more boys watched the ones without "Princess" in the titles, I'm pretty sure they can still be considered female-driven successes.

But it seems that's not good enough anymore. Pixar and Disney Animation Studios president Ed Catmull told the L.A. Times they were concerned that where "Rapunzel" -- er, "Tangled" -- is concerned, "Some people might assume it's a fairy tale for girls when it's not. We make movies to be appreciated and loved by everybody." OK, but with few exceptions, movies that can quite accurately be termed "fairy tales for girls" have done incredibly well for Disney -- so why, after one disappointing film, would you want to distance yourselves from that label, and from the millions of little girls who have dutifully harassed their parents into buying no end of princess merchandise?

I'm certainly not suggesting that what the world needs is more princess stories -- I'd like to hang on to my feminist card, thanks -- but the fact that those movies are explicitly about and for girls is not unimportant. This week I've seen three different feminist bloggers muse on "The Little Mermaid," 20 years after its release -- and although all acknowledge the anti-feminist messages it contains (that giving-up-your-voice thing is pretty huge), they all also have positive memories of what the protagonist meant to them as kids. "What I loved about Ariel was not just that it was a telling of one my favorite fairy tales, but that Ariel was portrayed as a headstrong teen who was curious and adventurous," writes Veronica at Viva la Feminista, who also puts in a good word for "Beauty and the Beast's" Belle. "You must understand that I didn't fall in love with the princess aspect of the tale, but rather the adventurousness and the intellect of the leads." Feministing's Chloe says that in retrospect, the film is "quite simply, a feminist's worst nightmare," and she felt "betrayed" watching it as an adult -- but nevertheless, as a child, she adored and emulated Ariel, "believing that her thirst for knowledge and adventure made her a wonderful heroine." And Feministing's Jos says the movie is, "for me, a trans fairy tale... I identified with [Ariel] instantly. Her problems made so much sense. Her whole world was wrong - she knew where she belonged, but no one could understand. And she didn't care, she went for it anyway, became the person she knew she should be in the world where she knew she belonged."

"This doesn't undo the problematic and offensive elements of the film," Jos writes, "but it does speak to our ability to see ourselves reflected in pop culture and build our own personal mythology using the tools available to us." Sometimes, when you identify with a character, you can find hopeful and meaningful messages even in deeply cringeworthy films. And if the princess movies have gotten one thing right, it's sending the message that stories about girls are worth telling and watching, that female heroes are important. The decision to scrap "The Snow Queen" and make Rapunzel's story (like most fairy tales, not exactly screamingly feminist to begin with) more about her male suitor in an effort to disavow the impression that it's "for girls" sends exactly the opposite message.

And to adults, it just reinforces one we're already familiar with: Female audiences are just not worth it -- even when those females are under 3 feet tall and conned us into spending $3.7 billion on princess-branded crap last year. Since they only got us to fork over $222 million worldwide, not counting tie-ins, for the latest princess film, making another movie for that market is just too big a risk. "Disney hopes the introduction of the slightly bad-boy character will help it tap the broadest possible audience for 'Tangled,' emulating the success of its corporate sibling, Pixar," says the L.A. Times. "Pixar's movies have been huge hits because they appeal to girls, boys and adults." Oh, and also, "Pixar has uniformly featured male leads in its films." Ah, yes. As always, boy stories are for everyone, but girl stories "alienate half the potential audience." Nothing personal, ladies -- it's just business. No reason to get upset or start reading too much into it.