American elites abandon their faux regret over the carnage because, as Tom Friedman explains, it's all working out 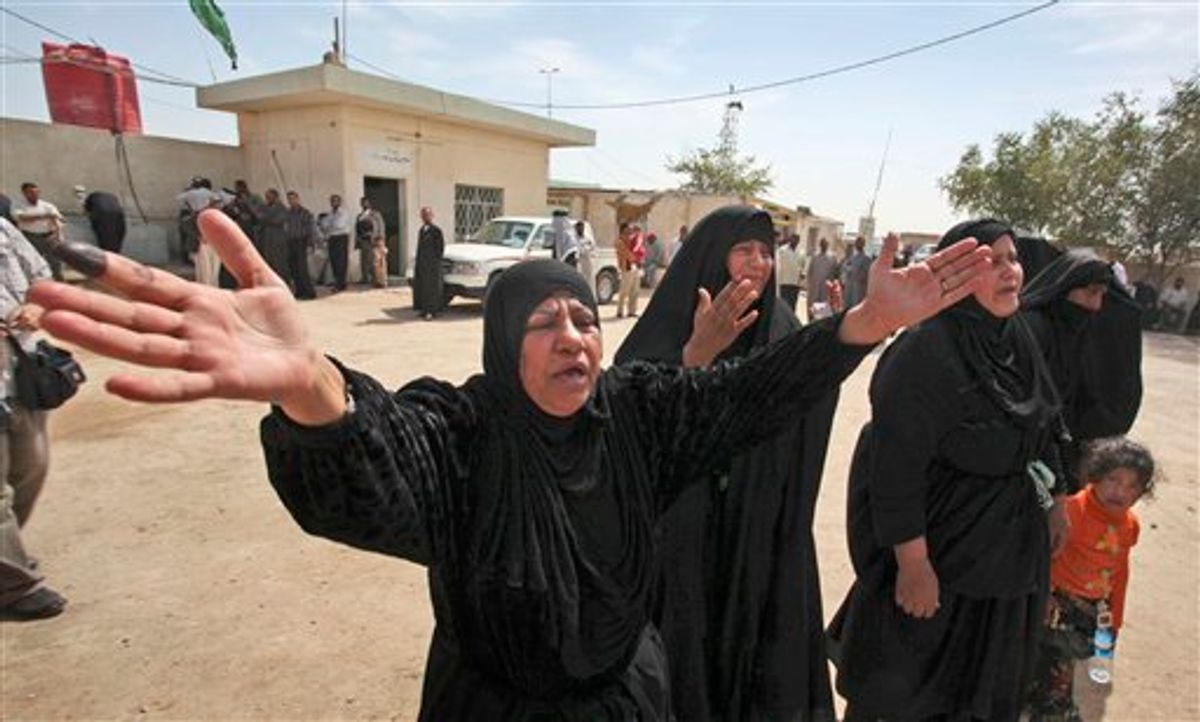 The mother, center-left, of Fayha Kadim, 23, and Fayha's son Muntadhar Waleed, 3, who were both killed in blasts in northeastern Baghdad Sunday, grieves at their funeral in Najaf, Iraq, Monday, March 8, 2010, while her finger still bears the ink of those who voted. The election day's death toll was 36, with various incidents of rockets and mortars, hand grenades and bombs all being used to target polling stations and the people voting. (AP Photo/Alaa al-Marjani) (AP)
--

The New York Times' Tom Friedman, who did as much as any single individual to persuade large numbers of Democrats and "moderates" to support the invasion of Iraq, today writes:

Former President George W. Bush’s gut instinct that this region craved and needed democracy was always right. It should have and could have been pursued with much better planning and execution. This war has been extraordinarily painful and costly.  But democracy was never going to have a virgin birth in a place like Iraq, which has never known any such thing.

Some argue that nothing that happens in Iraq will ever justify the costs. Historians will sort that out. Personally, at this stage, I only care about one thing:  that the outcome in Iraq be positive enough and forward-looking enough that those who have actually paid the price -- in lost loved ones or injured bodies, in broken homes or broken lives, be they Iraqis or Americans or Brits -- see Iraq evolve into something that will enable them to say that whatever the cost, it has given freedom and decent government to people who had none.

Sure, the war that I helped sell and cheered on led to the slaughter of hundreds of thousands of innocent human beings (at least), the long-term displacement of millions more, and the complete destruction of another country that had done nothing to us.  But I'm not interested in clouding my mind with any of that.  I don't care about that.  That can be talked about once I'm dead.  After all, as the great humanitarian Joseph Stalin taught us, you can't make an omelette without breaking a few eggs, and as the great scholar and torturer Condoleezza Rice explained, we should just gently shut our eyes and think about the massive slaughter and destruction we caused in that country as mere "birth pangs" on the road to something beautiful.

Back in 2003, I said -- with bloodthirsty sadism rabidly drooling from my mouth -- that the real purpose of the war, what made it the Right Thing to do, was that we needed to make large numbers of Muslims "suck. on. this" in order to show them we mean business, and we randomly picked Iraq because . . . . we could.  But now -- to justify the enormous amounts of blood I helped spill and the incalculable amounts of human suffering I helped spawn -- I'm going to pretend that I was motivated by a magnanimous, noble desire to Spread Freedom.

It was only a matter of time before American elites abandoned their faux regret over Iraq.  For tribalists and nationalists, America can err in its execution but never in its motives.  There's no question -- as this glorifying, propagandistic Newsweek cover story reflects -- that it's now official dogma that this was the right thing to do, or at least that we produced something great and wonderful for that country, as was our intent all along (leaving aside the what is actually happening in Iraq).  It's nothing short of nauseating to watch those responsible glorify what they did without weighing -- or, in Friedman's case, affirmatively dismissing as irrelevant -- the extreme amounts of death and suffering that they caused, all based on false pretenses.  But this is why Tom Friedman is the favorite propagandist of "Washington insiders"-- because he feeds them the justifications they need to feel good about themselves.  Forget all those innocent dead people and destruction you caused; it all worked out in the end.

UPDATE:  Several people argue in Comments that this effort to portray the invasion of Iraq as a good thing is motivated not only by a desire for self-cleansing on the part of those responsible, but also to enable future, similar wars to take place.  I don't know whether that's the motive, but it's definitely the effect.  That the invasion of Iraq has been so widely perceived as a horrific debacle had the effect of minimizing the likelihood of future invasions.  Having it now depicted as something that worked out and produced Great Results necessarily makes it easier to justify future wars in that region.  After all, if attacking and invading Muslim countries we don't like in order to change their government is the good and right thing to do, shouldn't we keep doing it?

UPDATE II:  Freedom is on the March:  we shouldn't burden our minds worrying about this, though; just do what Tom Friedman does and leave it to the historians while patting ourselves on the back.