She may not be worshiped like Dolly and Loretta, but the author of a new biography explains why she should be 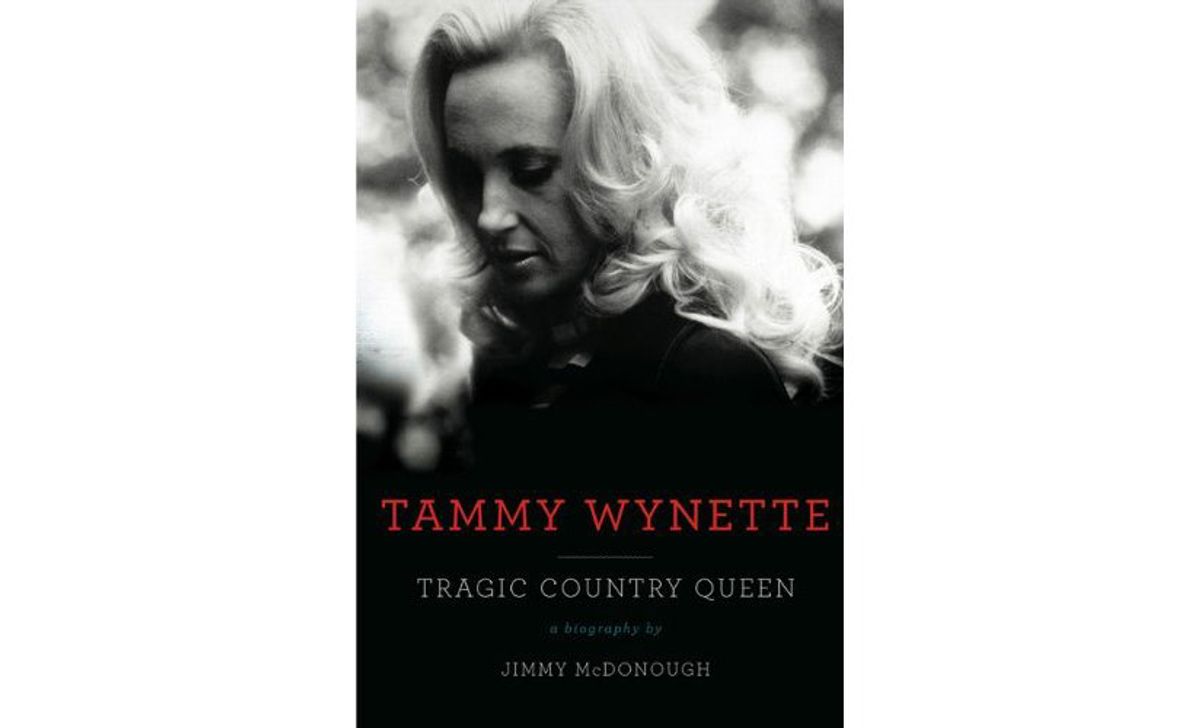 If there was a Mount Rushmore for women country musicians, Tammy Wynette would have to be on it. Along with Dolly Parton and Loretta Lynn, Wynette practically defined the role of the female country singer in the 1960s and 1970s, sporting an enormous blond bouffant while belting out jukebox staples like "D-I-V-O-R-C-E" and "I Don't Wanna Play House." By the time she died, caught in the grips of a bad marriage and a painkiller addiction, Wynette had racked up 17 No. 1 hits and became the first country musician to go platinum. Today, most remember Wynette for her signature ballad, "Stand By Your Man."

Of course, as Jimmy McDonough writes in the new biography "Tammy Wynette: Tragic Country Queen," Wynette didn't exactly follow her own song's advice, at least with the same man. In his book, McDonough tracks the tumults of Wynette's rocky love life -- five marriages and an affair with Burt Reynolds -- that made her the queen of tabloids in the 1970s, especially during her divorce with husband No. 3, Wynette's idol and duet partner, George Jones. But most of all, McDonough's book is about "a singer who lived her songs," a musician whose melancholy breakup ballads were inseparable from the heartbreak, addiction and pain in her own life. "I want you to feel this woman's presence as deeply as I feel her songs," McDonough implores. "I want you to stand by Tammy Wynette."

Salon wrote to McDonough to ask about Wynette's life -- everything from her bizarre kidnapping to her predilection for lime-green pantsuits -- feminism in country music, and why George Jones ended up the hero of this story.

You say that in the country pantheon, Tammy Wynette "gets taken for granted." Why do you think that is?

Shall we generalize, just for fun? I think Patsy, Loretta, Dolly -- all of whom are, of course, quite obviously great -- are easier to digest than Tammy. She's a throw-yourself-off-the-cliff romantic. There's a severity to Tammy and her point of view that gets your lumpy, cat-hair-covered NPR types to grinding their teeth. Now, your retro characters -- who tend to be the most rigid of all -- are put off by the baroque '70s production and the gloominess of it all. No standup bass, no Owen Bradley, no rockabilly '50s garb. Tammy falls into her own slot and you have to take her on her own terms.

The other thing is, you don't hear music like Tammy's anymore. Human feeling's been AutoTuned out of everything, nobody plays live, the tracks are overdubbed to death. I'm afraid Tammy might not have a place in our chilly times.

Wynette has a reputation -- based mostly on "Stand by Your Man" -- for being an anti-feminist mouthpiece, but she obviously paved the way for a lot of women in country. Do you think it's fair to call her anti-feminist?

I think that's horribly reductive. Tammy wore lime-green pantsuits! Proudly! Hmmm, feminist or anti-feminist? She's a little too complex for such simplistic labels. When I hear such talk I immediately tune out. I see chickens dancing on hot plates, dwarves shooting muskets in the air. I notice that people who think in such terms often have terrible taste in music. Some folks just can't take country straight, no chaser, there has to be those greasy rock additives.

You mention that "if there's a hero in this book, it is George Jones," but his relationship with Wynette was pretty fraught. Could you explain that a little more?

First of all, Jones is alive. That alone deserves an entry from Ripley's. And George remains true to the music. Jones figured out a way to survive without sacrificing who he was. Not an easy trick. When Tammy died, it was Jones -- a man who hates hospitals, funerals or anything of the sort -- who accompanied her daughters to the funeral home. No doubt Tammy is smiling down from somewhere above when it comes to Jones.

What's the most bizarre incident you looked into while writing this book?

I'd love to get to the bottom of her bizarre "kidnapping." No ransom, no suspects, no arrests, a story full of unreliable narrators. After she "escaped," Tammy stumbled onto the property of a George and Tammy fan -- one Junette Young. I love the fact that Junette decided "it wasn't the time or place" to inform Tammy she was a fan as she cut off the stocking knotted around Wynette's neck.

What one thing would you ask Tammy if she were alive?