Slow foodies are not cavemen

Freakonomics calls the local-grown, sustainable movement a retreat to "primitivism." It's really proof of progress 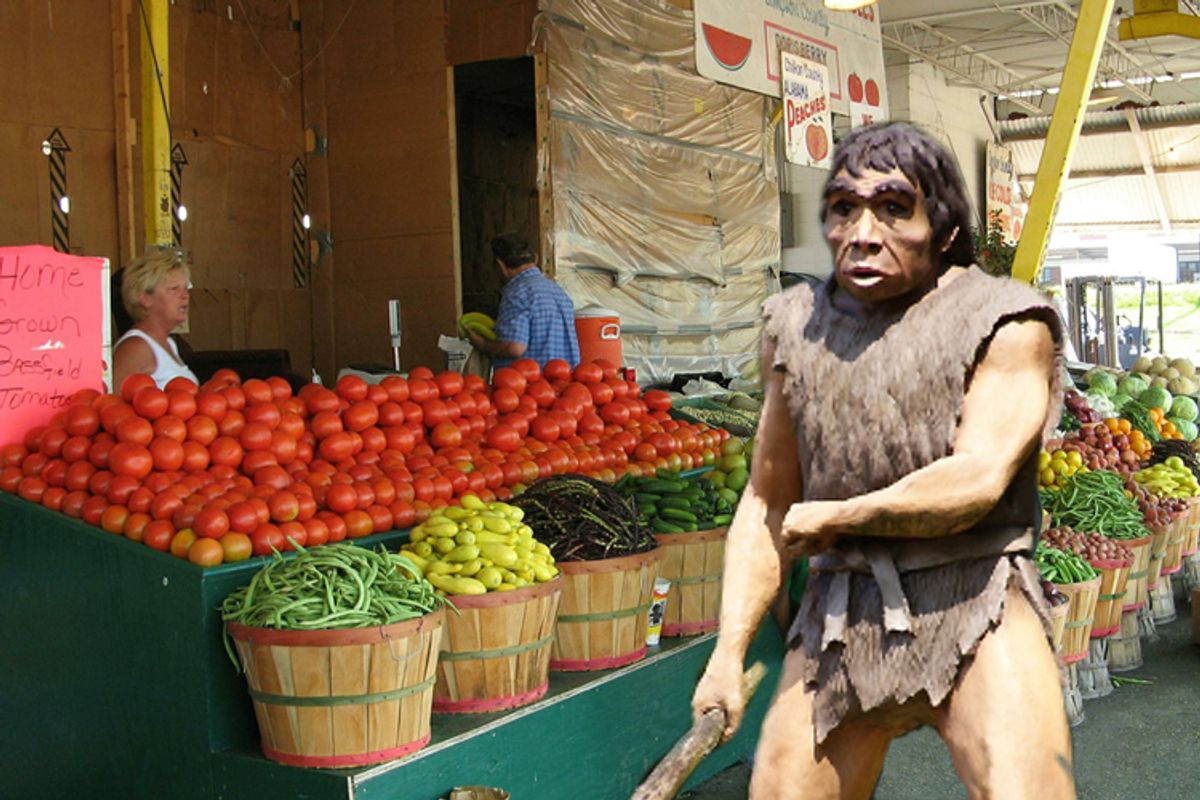 The condescension pours from James E. McWilliams' Freakonomics post, "The Persistence of the Primitive Food Movement," with all the force and power of thousands of bushels of genetically modified corn pouring into an Iowa silo.

Americans are currently embracing a strange sort of primitivism. Bicycles are losing gears, runners are afoot in shoes designed to create a barefoot sensation (some are even running barefoot), and men are growing bushy Will Oldham-like beards. It's all very curious and entertaining.

But nowhere has our love for the supposed simplicity of the past been more evident than in food trends.

McWilliams, a historian at Texas State University, has made challenging the mores of the organic, slow food, eat local movements his life work. The title of his last book: "Just Food: How Locavores Are Endangering the Future of Food and How We Can Truly Eat Responsibly," is sufficiently illuminating. This time out, his argument is straightforward: The reaction against "industrial food" is just another time-honored manifestation of an American infatuation with a simpler life.

For all their moral impact, our linear jeremiads fail to capture the circularity of history. This is especially true with our back-to-the past reaction to "industrial food." Current calls for dietary simplicity might have a revolutionary ring to them. But what's overlooked in all the enthusiasm is this: Americans have always idealized, or at least harkened back to, an agricultural era when production was supposedly simpler, closer to the land, and unadulterated by the complexities of modernization. What we're seeing right now with the food movement is, for all its supposed novelty, a stock (even banal) reaction to broad historical changes.

Wow: "curious," "entertaining" and "banal." That's quite the triple play. I imagine McWilliams observing the customers at a Berkeley farmer's market with the bored half-smile of a late 18th century French aristocrat gracing his face. Ah, the native customs here, their very quaintness makes them both fascinating and so very, very dull!

I will grant that Americans have an undeniable tendency to idealize "mythical golden ages" and McWilliams does a good job of unearthing outbreaks of such longing, as they pertain to food, going all the way back to James Madison. But this emphasis on the circularity of history plows directly into a paradox: By dismissing those who are currently pushing for healthier food and more sustainable agriculture as "primitives" he is making an implicit argument against another core American belief -- our faith in progress.

Michael Roberts, an economist who specializes in food issues, touches upon this issue in his own response to McWilliams:

The difference between today's movement and the past is that we have data that show real costs to health stemming from cheap and highly processed food. The obesity crisis is real. Growth in diabetes is real. The broader causes are pretty clear.

That's right. Science. Michael Pollan's pithy manifesto -- "Eat food. Not too much. Mostly plants" -- isn't a reaction against modernity; it's a consequence of the human ability to probe the mysteries of the universe and learn how things work. It is rooted in science, the outcome of our ever-advancing understanding of biology and chemistry and nutrition. If the course of the Industrial Revolution proves anything, it is that history is not circular. We are hurtling into the future at high speed and making lots of mistakes as we do so. But we're smart critters and we can learn from our mistakes and fix things as we go. (That's the theory anyway -- the 21st century may yet prove me wrong.) There are health implications to eating too much processed or junk food, and there are environmental implications to industrial agribusiness, and there are always better ways to do things.

In her review of "Just Food" for Grist, Stephanie Ogburn wrote that "Again and again, one gets the uncomfortable feeling that McWilliams creates fanatical straw men in order to make his own presentation of facts seem like a rational alternative." That's exactly what he's doing at Freakonomics, and it is neither curious nor entertaining. But it is predictable contrarianism, so I guess it qualifies as banal.