A gig hosting "SNL" is just the latest coup for the Golden Girl. Why do we love her so? 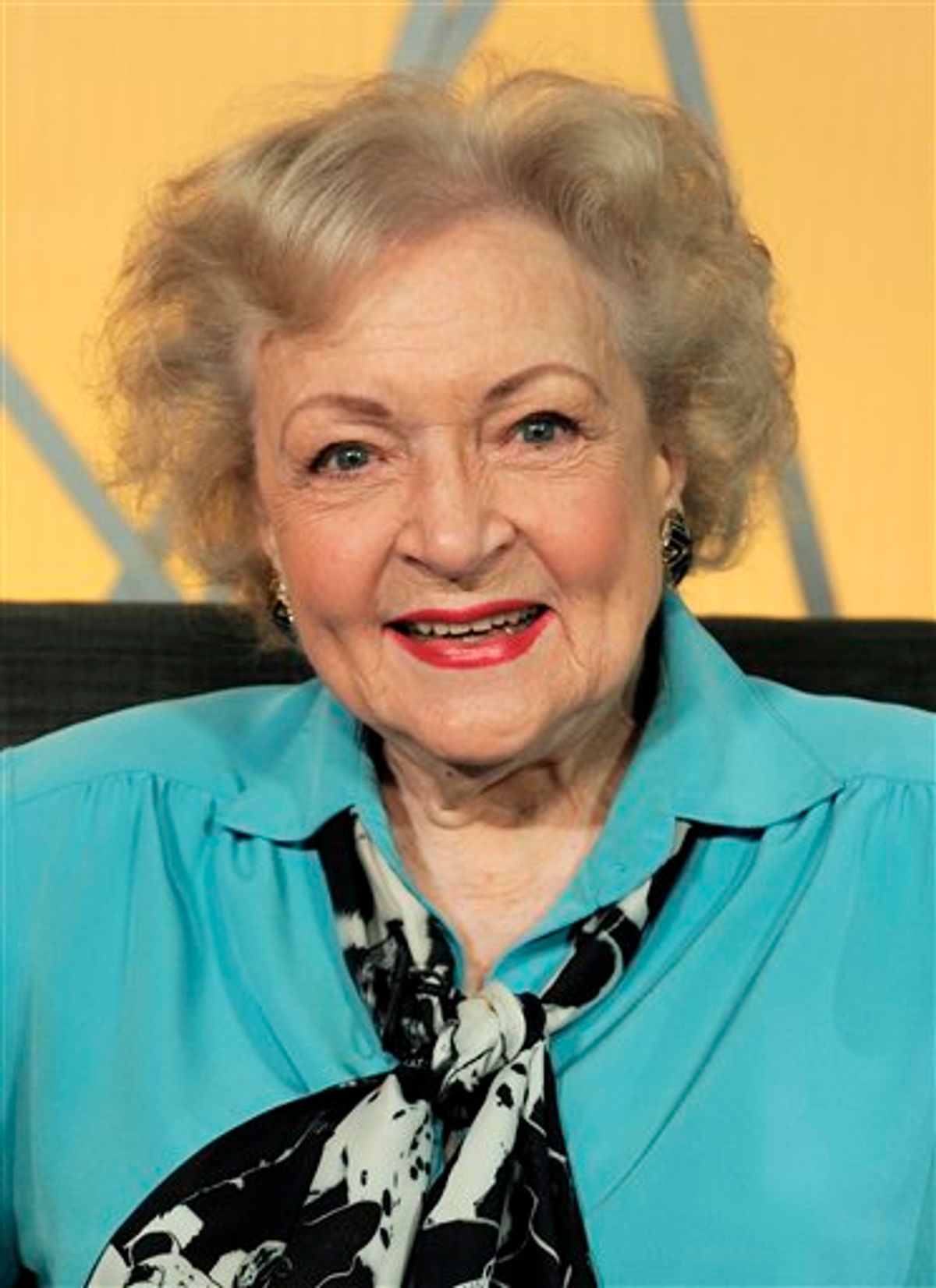 This year's It girl is 88 years old. Betty White, the hardworking actress, recent recipient of a Screen Actor's Guild lifetime achievement award  and star of a brilliant Snickers ad, is enjoying the kind of career success that would make Megan Fox jealous. So devoted are her legion of fans that they launched a Facebook campaign to get her to host "Saturday Night Live" -- one that actually worked. She'll guest on the May 8 episode, one that promises to team her with fellow comic heavyweights Tina Fey, Amy Poehler, Molly Shannon, Maya Rudolph, Ana Gasteyer and Rachel Dratch.

Why is a woman who'd be justified in limiting her aspirations to kicking ass in mah-jongg instead one of Hollywood's most sought-after performers? Is it that, as Tracy Clark-Flory pointed out a few weeks back, "She's sugary sweet and filled with subversiveness"? Well, sure, that's a part of it. There's something about the incongruity of a nice old lady being so tough, so dirty-mouthed, that makes for reliable comedy. One need only hear her refer to Sarah Palin as a "crazy bitch" to be smitten.

But there's more to it than that. Betty White is not a typical punch line, doddering off like Grandpa Simpson. We get plenty of that in our pop culture already. Look at the old people! Aren't they funny? They're so slow and out of it! Hardy har har!

But guess what, kids? Inside every creaky geezer there's a person who was once quite likely just as lively and oversexed and troublemaking as you are now. The elderly aren't an alien species. They're the future versions of ourselves. So while there's comic fodder to be had in the dehumanization that only accelerates as one spends more time on earth, easy gags involving jive-talking grannies will only get one so far. No, to truly capture hearts and imaginations within a culture that caters largely to the whims of Nintendo-playing 13-year-old boys, one has to be able to do more than take a tackle in a candy bar ad. White knows how to make a joke, but she herself isn't one. She's too sharp, too knowing, too disarmingly clever. Watch her recent SAG awards speech, as she stands there in her blue gown and insists, "You still can't get rid of me," and see -- this is a lady who knows how to work the room.

Getting old isn't for sissies, and Betty White is no sissy. That's why we love her, not just for the charming, hilarious individual she is, but for the hope she offers every current and future senior citizen that there's more to aging than loneliness, indignity and stories nobody wants to hear. She's reassurance against our own dark fears of outliving our usefulness, of becoming irrelevant. Few among us will ever be invited to host "Saturday Night Live" when we're pushing 90, but Lord, isn't it nice to imagine we'll still be invited anywhere by then? That we'll be loved and valued because we're so goddamm interesting and awesome? Betty White is not sitting on the porch, reminiscing about who she was. She's living in the world, being who she is. And when we grow up, we want to be just like her.