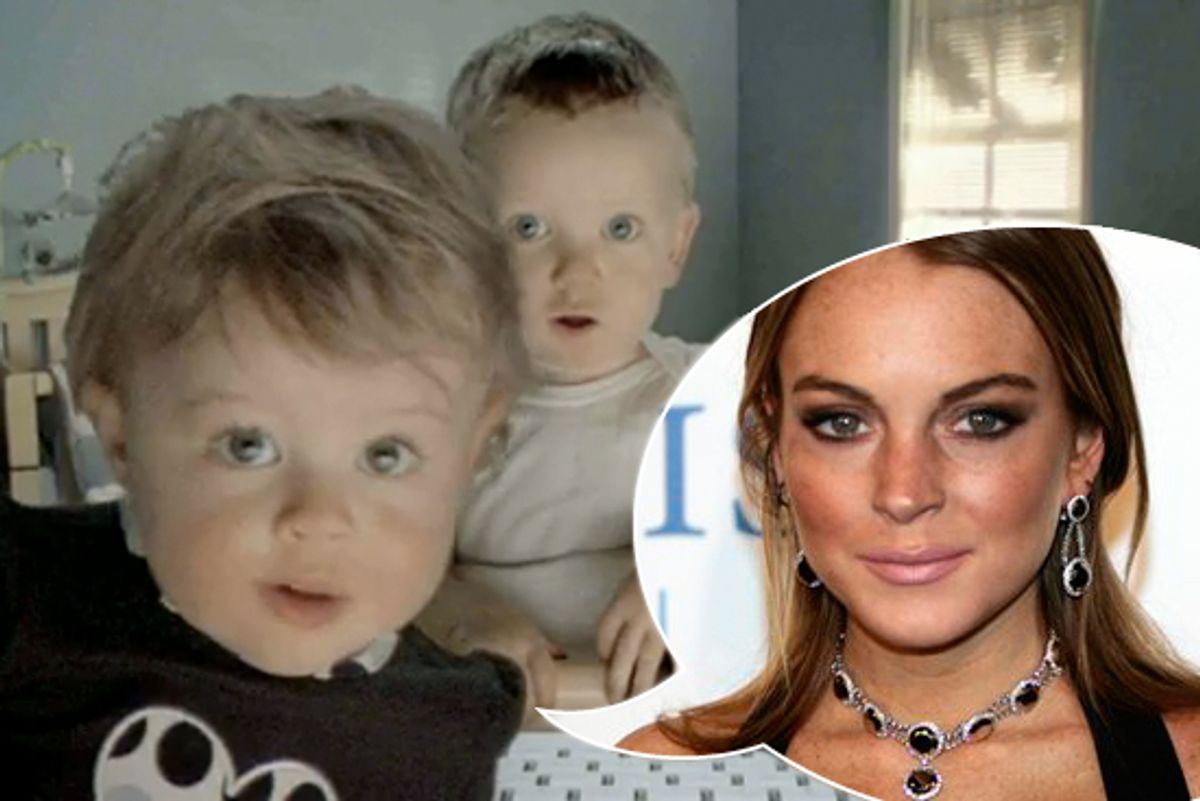 She probably thinks Carly Simon wrote "You're So Vain" about her, too. In a feat of solipsism impressive even for a starlet, Lindsay Lohan up and sued E-Trade this week because one of its kooky talking-baby ads featured a boyfriend-stealing, lactose-abusing baby named Lindsay.

In the ad, which premiered last month during the Super Bowl, a scolding baby girlfriend asks her beau if "that milkaholic" Lindsay came over last night, prompting a little cherub to pop into the frame and query, "Milk a whaaa?" That little whore.

On Tuesday, the New York Post reported that Miss Lohan, assuming any reference to a trampy train wreck named Lindsay is a reference to her, had slapped E-Trade with a $100 million lawsuit over the spot.

The suit, filed in Nassau County Supreme Court, claims E-Trade used her "likeness, name, characterization, and personality." In addition to seeking $50 million in compensatory damages and $50 million in exemplary damages, the suit asks E-Trade to stop running the ad and surrender all copies of it to Lohan. Speaking to the Post on Monday, Stephanie Ovadia, who is named on the suit as Lohan's co-attorney, said, "They're using her name as a parody of her life. Why didn't they use the name Susan? This is a subliminal message. Everybody's talking about it and saying it's Lindsay Lohan."

There's so much crazy in that statement, one hardly knows where to begin. The fact that Lindsay is not an especially unique name? If E-Trade had a baby named Ke$ha, brushing her lone tooth with a bottle of Jack, we'd have a harder time chalking it up to coincidence. How about the reality that milkaholism isn't even a real thing, any more than, I don't know, talking, portfolio-managing babies? Or the simple truth that the last time the words "everybody's talking" and "Lindsay Lohan" appeared in the same sentence, it was 2004?

The assertion of any true intention in the ad did, however, appear to get a boost yesterday when Esquire writer Joshua David Stein posted the Grey Group agency's original E-Trade script -- and showed the name Lindsay handwritten over a scratched-out "Deborah." (Somewhere, there's an '80s era pop star kicking herself over a missed lawsuit opportunity.) But not so fast --  further up on the page, the browbeating girlfriend clearly refers to "Lindsay" -- who at this early stage is "that bimbus." Poor floozy Lindsay has, in fact, several alternate epithets, evidenced in the script's side notes; had she not been a milkaholic she might instead have been a floosbag, slummock, rug burn, pudge muffin, skanky cake, fish face or jailbait.

So if, somewhere along the way, the Grey Group decided that Lindsay sounded sluttier than Deborah and that milkaholic was funnier than skanky cake, why would anyone think it was specific to her? Would Lohan have sued if the final ad referred to "that picklehead"? And let's just say that ultimately the reference was to the actress. Isn't it possible that once you've had to strap on a court-ordered alcohol monitoring ankle bracelet, you forfeit the right to get uppity over any "aholic" suffixes applied to you?

But here's the kicker: Lindsay may care less about all this than her $100 million lawsuit would lead one to believe. An item on  Gawker noted that attorney Stephanie Ovadia has worked for the actress's estranged dad. (Lohan had different representation following her 2007 DUI.)  If you famously didn't speak to your father and referred to him as "nuts," how eager would you be to hire his lawyer? Lohan's mother, Dina, meanwhile, told the New York Post yesterday, "I'm just basically glad I took a stand. I'm not going to let them do this to us anymore." Wait, who's taking a stand here? Who is E-Trade doing this to?

Lohan herself has made no statements on the alleged E-Trade dis beyond a Super Bowl Sunday tweet that read "Did that just happen? On that commercial? Or am I wrong?" Hardly the stuff of multimillion-dollar lawsuits. So it's possible that Lohan -- who's currently in Paris for fashion week -- is only vaguely aware what her dad's lawyer is up to. Maybe her mother's recounting of a tearful phone call in which she said, "Mommy, help me. This is wrong. How can they do this?" is a bit of an exaggeration. Maybe she's not as entirely frivolous and self-obsessed as the lawsuit that bears her famous name would lead one to believe. Maybe, instead, the 23-year-old is just a pawn of her parents. Which makes her lawsuit not quite so delusional, not even so greedy. It just makes it sad.