Glenn Beck and the war on progressives

A generation after Democrats fled from the term "liberal," the right is going after "progressive," too 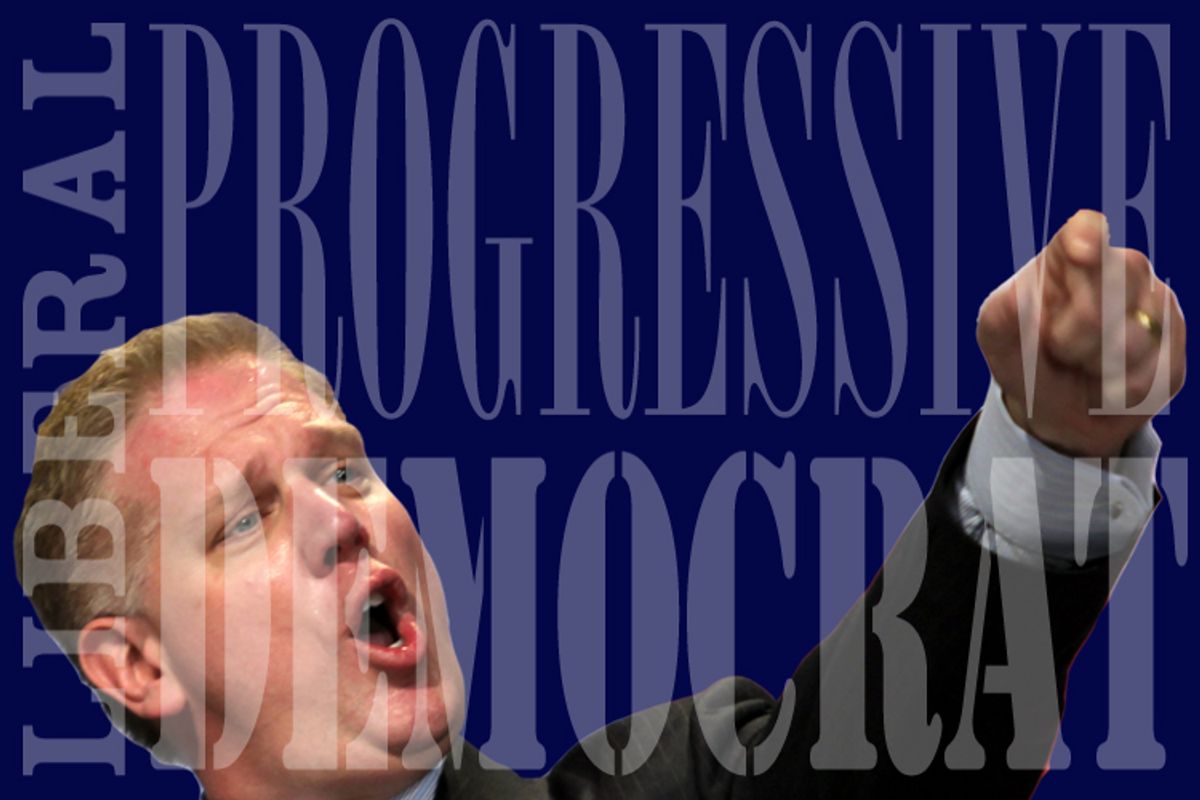 Wake up, America, there's a new, dangerous threat on the horizon: progressives. You may have heard about them if you've been paying attention to the right sources. They come from the 1920s, they're basically socialists -- or maybe fascists -- and they're here to steal your country.

A generation after Ronald Reagan and his allies turned "liberal" into an epithet, conservatives are going after the term many Democrats adopted in its place. Glenn Beck and his paranoid Fox News Channel ranting is just at the forefront of what appears to be a movement to demonize the word "progressive," in hopes of scaring voters away from the left. "Progressivism is the cancer in America, and it is eating our Constitution," Beck told thousands of adoring fans at the conservative CPAC conference last month. "And it was designed to eat the Constitution. To 'progress' past the Constitution." The National Review ran a whole special issue on progressives in December; staff writer Jonah Goldberg even published a book on the subject, "Liberal Fascism," two years ago. The latest ad for Liz Cheney's new group, Keep America Safe, prominently features Attorney General Eric Holder declaring that progressives are about to run the nation -- before seguing, sharply, into asking whether Holder's pals share the values of al-Qaida.

Of course, "progressive" also happens to be the way nearly every Democratic lawmaker, activist and politician describes him- or herself these days. There is, for example, the Congressional Progressive Caucus in the House and Senate; and the Center for American Progress, a think tank; and the Progressive Democrats of America, a liberal group. Which means all the scary rhetoric on the right -- if it goes unanswered -- could do exactly what it's intended to do: make Democrats seem like the enemy.

The bad-mouthing of the word "progressive" hasn't quite reached the fever pitch that the Reaganite bashing of liberals did. After the culture wars of the 1960s and the backlash of the 1970s, "liberalism" had developed such a bad rap that throwing the word around was like political Kryptonite for Democrats. By the end of the Reagan era, Republican adman Arthur Finklestein was helping his clients win elections simply by calling their opponents liberals. (Former New York Gov. Mario Cuomo was unseated in 1994 by then-state Sen. George Pataki, using the slogan: "Too liberal for too long.") At the time, Bill Clinton and his ideological friends at the Democratic Leadership Council got a lot of attention for finding a way to move past the old definition, which got bogged down in cultural politics and Reaganite slurs about "welfare queens," and claiming to represent a new type of Democrat.

"On the left, cold-war liberals and neoliberals were not what anyone wanted to be, and the right had done a job on 'the liberal elite,' the 'tax-and-spend liberals,' etc.," says George Lakoff, a Berkeley linguistics professor who has consulted with Democratic leaders on how different words can affect political battles. "So many of us went to 'progressive.'"

That seems to have worked. A few years ago, a Rasmussen poll found 39 percent of voters reacted negatively to calling a politician "liberal," compared to only 18 percent for "progressive." Just a couple of months ago, the Des Moines Register's Iowa Poll found 42 percent of Iowans -- including 15 percent of Iowa Republicans -- considered themselves progressive.

There's a solid history behind the term that appealed to many Democrats, as well. The Progressive Era brought America, among other innovations, direct election of senators; the right for women to vote; antitrust regulations and the first limits on corporate power; child labor laws; the eight-hour workday; and national parks. "Folks at [the Center for American Progress] clearly identify with the animating values and spirit of the original Progressive Era," says John Halpin, co-director of CAP's Progressive Studies Program. "This is not a dodge, it's a proud association."

But listen to Beck, or read the sources of his paranoia, and there's a far more sinister history involved. Progressives, in Beck's telling, were the prototypical European authoritarians, tied just as closely to fascists and Communists; the progressive notion that government could help change things for the better (instead of just staying out of the way of the free market) becomes the ideological glue that unites those two disparate movements. "Where did the progressives go, where did they come from?" Beck asked at CPAC. "All of a sudden, I'm not a liberal, I'm a progressive. It was the opposite a hundred years ago. I'm not a progressive, I'm a liberal. I mean they keep -- they keep changing their names. Every time they wake America up to their policies, they have to change their names. What are they going to be next, the Royal Order of the Orange? It doesn't matter. They're running out of names." Not long after that, he went on a long tangent praising Calvin Coolidge. At times, Beck really does seem to want to go back to a time before the Progressive Era. On Wednesday's show, he scoffed at the notion of national parks and monuments, asking -- dead seriously -- why the country doesn't just drill for oil in all of them to wipe out the national debt.

The net effect of most of his rhetoric, though, just adds up to a spooky conspiracy theory that's hard to follow because it jumps around so much. "It mixes up these abstract ideas of the original Progressives with notions of European fascists and socialists and Communists -- it lumps them all up and they all sound bad," Halpin says. "They never actually repudiate any of the key advances of the Progressives that most people take for granted today." In Beck's version of history, the Founding Fathers come out as the heroes for fighting against the Progressives -- never mind that they predated them by over a century. "They just have this, 'We're going to vaguely associate with fuzzy good things, and we're going to bad-mouth things that sound like they're evil,'" Halpin says.

But instead of sitting back and letting "progressive" become the next American political boogieman -- like what happened to "liberal" -- some Democrats want to fight back. "This is the big fight about the role of government and markets," says Robert Borosage, co-director of the Campaign for America's Future (who also says he's proud to call himself a progressive, because of the original economic populism of the Progressive Era). "People need a clear narrative about how we drove off a cliff, and what we need to do to get off of it, and it has to relate to a set of ideas about how we got off the cliff." That's where laying out a progressive agenda -- and explicitly identifying the conservative agenda as opposed to it -- would help.

After all, it's one thing to spin conspiracy theories and imply that your opponents are goose-stepping Nazi Communists hell-bent on seizing all private property. It's another thing altogether to have a debate over whether to abolish the weekend, or go back to the pre-"Jungle" days of no meat inspection. Last time conservatives went after the term Democrats used to define themselves, the damage lasted a generation. Progressives may laugh at Glenn Beck now, but if his assertions keep going unchallenged, they might not be smiling for long.