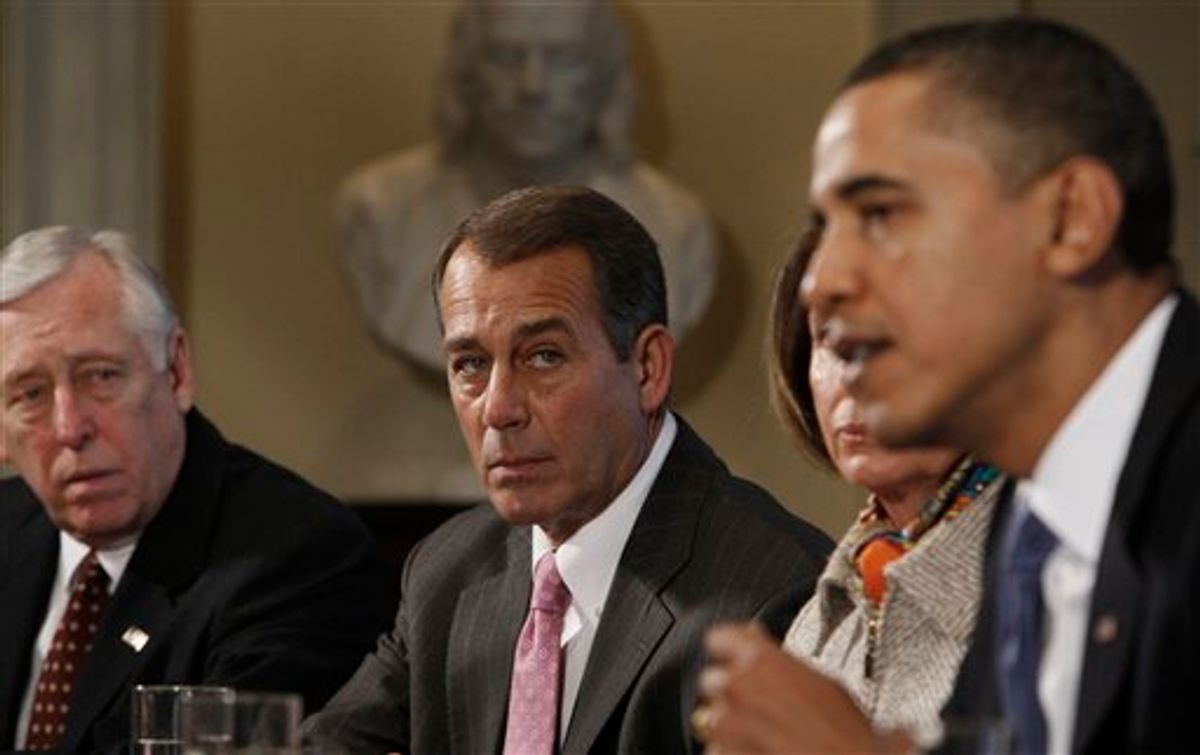 Now that Eric Massa has outlived his very brief moment as a star on right-wing media, the deranged ex-congressman is again merely a foil for attacks on the Democrats. Yesterday, the House passed a resolution directing the busy, busy ethics committee to investigate the handling of the Massa matter by Speaker Nancy Pelosi, Majority Leader Steny Hoyer and their staff members.

Instigated by Minority Leader John Boehner, the renewed probe is meant to restore, in his words, the “broken bonds of trust” between Congress and the American people. So far, of course, there is no evidence that anyone in the congressional leadership violated that trust regarding Massa’s misconduct. But the ethics committee will have ample opportunity to uncover and examine any such evidence between now and the deadline for its report on June 30.

In the meantime, Boehner’s indignant-sounding resolution provides a reason to recall his own behavior during the Mark Foley scandal. On the day that Foley resigned in September 2006 after media exposure of his suggestive communications with House pages, Pelosi — then the Minority Leader — brought a resolution to the floor demanding that the ethics committee begin an immediate investigation, with a preliminary report due 10 days later. Her resolution directed the committee to find out "when the Republican leadership was notified [of Foley’s misconduct with a former House page] and what corrective action was taken."

But Boehner, then the Majority Leader, blocked that resolution, and the House referred the matter instead to the ethics committee, which met in October to decide what to do. The committee — then overseen by the Republican leadership’s pliant handpicked chairman Doc Hastings — did not complete its report until early December (after the blowout midterm election that returned the Democrats to the majority).

Yet that report, titled Investigation of Allegations Related to Improper Conduct Involving Members and Current or Former House Pages, contains harsh criticism of Boehner. Much investigative work was required to sort out the contradictory accounts that Boehner and then-Speaker Dennis Hastert, among others, had offered concerning what they knew about Foley’s suggestive messages to the pages, when they knew it, and what they did. The short version, stripped of self-serving memory malfunctions, is that they knew for many months and did nothing.

The main findings regarding Boehner can be found on page 85:

The Investigative Subcommittee finds that the weight of the evidence supports the conclusion that Speaker Hastert was told, at least in passing, about the [Foley] emails by Majority Leader Boehner and Rep. [Tom] Reynolds in the spring of 2006 … Like too many others, neither the Majority Leader nor Rep. Reynolds showed any curiosity regarding why a young former page would have been made uncomfortable by emails from Rep. Foley. Neither the Majority Leader nor Rep. Reynolds asked the Speaker to take any action in response to the information each provided to him, and there is no evidence that the Speaker took any action.

Although the report did not recommend any action against Hastert, Boehner or Reynolds, its executive summary arraigned them all for an awful dereliction of duty:

The failure to exhaust all reasonable efforts to call attention to potential misconduct involving a Member and House page is not merely the exercise of poor judgment; it is a present danger to House pages and to the integrity of the institution of the House.

On page 68, the report also contains a little-noticed account of a questionable meeting of several members of the Republican leadership in Boehner’s office only hours after Foley resigned — and after the House had directed the ethics committee to investigate. (Among those present was Rep. Eric Cantor, R-Va., now the minority whip.)

Sometime before midnight, a meeting was held in Majority Leader Boehner’s office to talk about the [Foley] matter … Since the meeting was convened after the referral [to the ethics committee], some participants questioned whether it was appropriate to conduct the meeting. Rep. Reynolds chose not to attend the meeting on the advice of his counsel, Randy Evans, after suspecting that Rep. [Rodney] Alexander and others who had prior knowledge of the Foley matter might be in attendance. Rep. Reynolds testified: ‘I’m not inclined to go in and collaborate or memorialize anything that would deal with this based on the fact that, previous to this, we had voted to send it to the Ethics Committee … Not being a lawyer, there are not many things I know about the legal side of this, but I do know that discussion of recollecting anything is not preferred.”

The meeting proceeded anyway in order to facilitate media spin by the leadership, with Boehner assuring everyone that there was no desire to influence anyone’s recollections.

Boehner’s urge to investigate Pelosi and Hoyer is understandable, even if it represents nothing more than partisan pettiness and revenge. To avoid disappointment, however, he should realize that the standard set by him and his Republican colleagues in the Foley affair will not be difficult to surpass.