Why no "groping" during "Runaways" kiss? 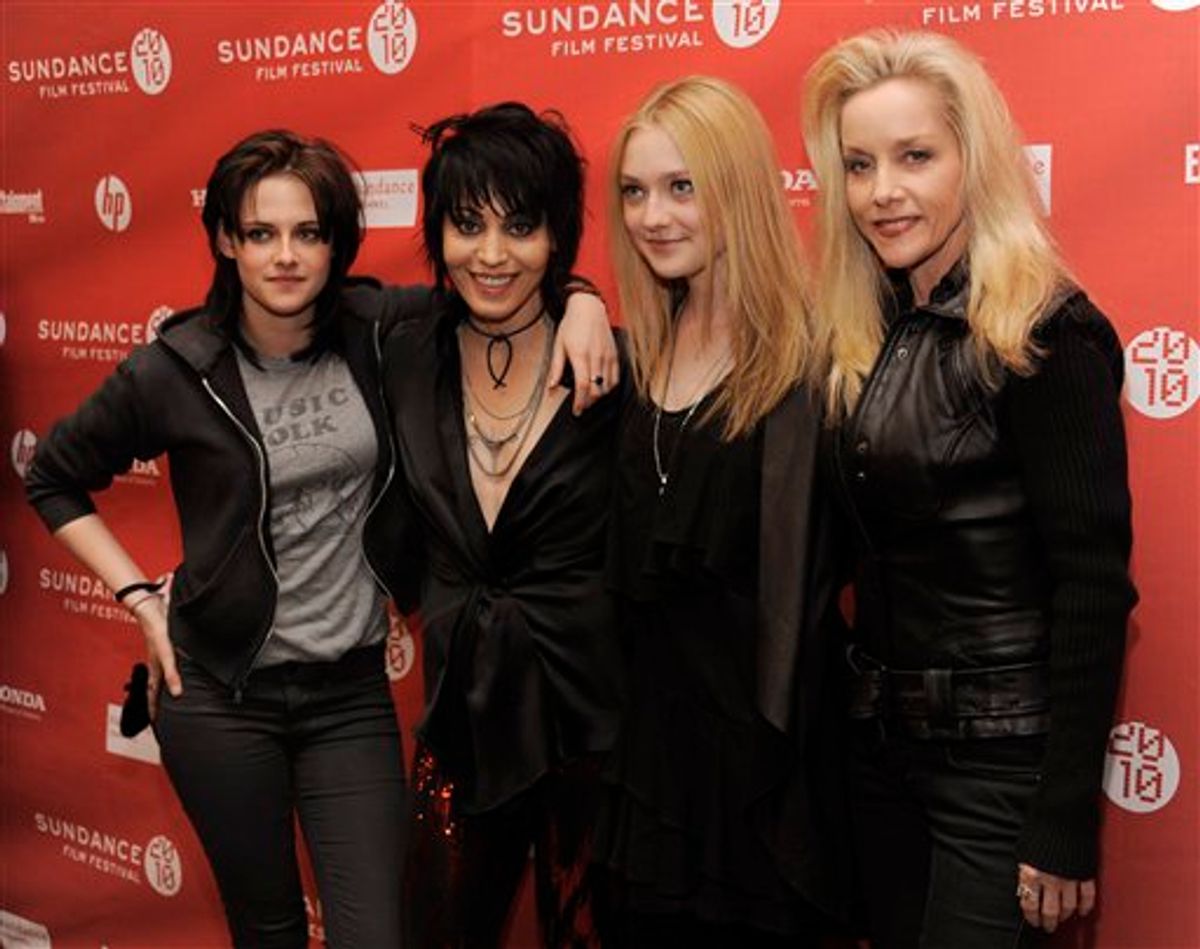 From left, Kristen Stewart, Joan Jett, Dakota Fanning and Cherie Currie pose together at the premiere of the film "The Runaways" at the Sundance Film Festival in Park City, Utah, Sunday, Jan. 24, 2010. Stewart plays Jett and Fanning plays Currie in the film, which chronicles the story of the rock band The Runaways. (AP Photo/Chris Pizzello) (AP)
--

The gossip rags were buzzing yesterday about the Kristen Stewart, Dakota Fanning kiss in "The Runaways." Like, oh my gosh: The "Twilight" actress thought smooching her then-15-year-old costar was "cool" -- she kissed a girl and she liked it, maybe? -- and her "lips are sealed" about how her girl-on-girl lip-lock measured up to (giggle) snogging Robert Pattinson and, and, and ... she wasn't allowed to "grope" Fanning because of legal restrictions. Amid all this feverish, titillating coverage, that last bit was overlooked. Legal restrictions, you say? For an underage make-out scene? For some clarity, I called Amy Adler, a law professor at New York University who has extensively studied child pornography law.

"The basic definition of child pornography is a photo or a film of a child under 18 engaging in sexual conduct," Adler explains. "Sexual conduct can mean a range of things, including actual sex acts but it also means lascivious exhibition of the genitals. That in turn is a standard that is open to interpretation by courts and has been interpreted broadly at times." It's easy to see how such mounting legal jargon could quickly magnify even a marginally sexual scene involving someone underage into kiddie smut. "There have been numerous examples where the term 'lascivious exhibition' has been applied to pictures that were sexual but in which the children were wearing clothes," she says. "Without an overt sex act, without nudity, those cases usually involve marketing to pedophiles, not mainstream Hollywood movies." There are always exceptions, though, seeing as child porn law is rather "amorphous." Jeffrey Douglas, a criminal defense attorney, puts it in more basic terms: "A 15-year-old is deemed by the law incapable of consenting [to being touched sexually] and therefore [the filmmakers] can't allow it."

You might recall the controversy over a brief rape scene in another Fanning movie, "Hounddog," shot when she was just 12 years old. She didn't get naked, she wasn't shown naked on-screen, but some still deemed it child pornography and petitioned to have the actress's mother and agent arrested for allowing her to appear in the disturbing scene. The filmmakers and Fanning's guardians avoided criminal charges, but nonetheless had to weather a storm of bad press. The public reaction to "The Runaways" kiss is, unsurprisingly, very different: Not only is Fanning three years older (in a growth period where three years makes a vast difference), but the scene at issue doesn't feature a rape. Plus, it's girl-on-girl canoodling, which is generally seen as playful and nonthreatening; we tend not to see the same potential for corruption and harm.