It may look cliched, but this culture-clash comedy is an example of what's missing from mainstream American film 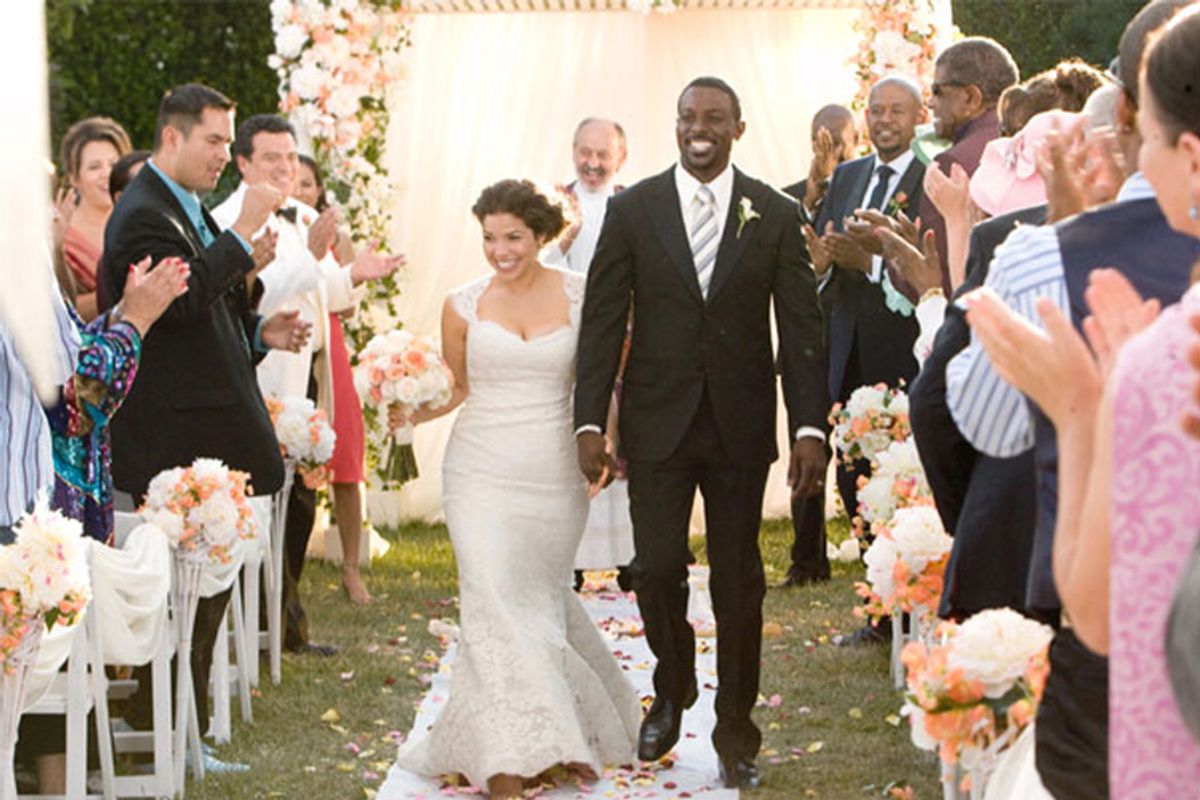 America Ferrera and Lance Gross in "Our Family Wedding."
--

Rick Famuyiwa's "Our Family Wedding" is one of those movies — like those made by Tyler Perry — that are not supposed to need critics, which is barely a problem, since most critics who consider themselves "serious" won't bother to see it anyway: It's the kind of picture that, on a newspaper at least, is generally doled out to a second or third stringer, or a freelancer. Many of those who do write about it will likely use words like "clichéd" and "formulaic" to show they've seen it all before. This is, after all, a culture-clash comedy in which a young couple who have decided to marry, Lucia Ramirez and Marcus Boyd (America Ferrera and Lance Gross), must introduce each other to their respective families. Lucia's parents, played by Carlos Mencia and Diana-Maria Riva, don't yet know that their daughter's boyfriend is black. Coincidentally, Marcus' father (Forest Whitaker) has just had his car towed by Lucia's father, and the two have spent some time exchanging mild racial epithets.

But sometimes the very movies that critics aren't supposed to bother with — and act blasé about when they do — tell us more about what's missing from American mainstream movies than about what's in them. "Our Family Wedding" is a breezy, uncomplicated, unapologetically broad comedy that isn't trying to be the next "Knocked Up" or "The Hangover"; that features a number of appealing actors who don't show up in movies as often as they should (chiefly because they're not white); and that shows us a world in which people of color aren't necessarily struggling financially or dealing with drug problems or trying to stay out of jail.

The major point of conflict in "Our Family Wedding" — that the families are wary of each other because of cultural differences and their unshakable awareness of stereotypes — is exaggerated. But then, exaggeration is often a major ingredient of comedy, and "Our Family Wedding" never pretends it's striving for nuance. That means there are elements of slapstick (including a goat who's intended to be part of the wedding feast but who wreaks havoc on the stacked glassware and elegantly laid tables instead) and sequences in which the Latino guy and the black guy circle each other warily. When Whitaker's character begins to boast, "Once you go black...," Mencia's character counters, under his breath, with "your credit goes bad." The joke itself isn't funny; what is interesting is the way each of these guys has so much invested in proving who's lower on the totem pole, not just in terms of color but in terms of class. In fact, "Our Family Wedding" may have more to do with class than it does with color. Marcus is a physician who's about to go to Laos with Doctors Without Borders, and he wants Lucia to go with him — hence the hasty marriage. Lucia has dropped out of Columbia Law School for reasons of her own, although her father, a mechanic who runs a lucrative towing business and garage in Los Angeles and who's also highly skilled at restoring vintage cars, doesn't know that yet. Marcus' dad is a smooth-talking Los Angeles DJ (Whitaker's smooth, purring voice is put to good use here) who's been footloose and fancy-free for so long that he can't see that his longtime best friend, a successful entertainment lawyer played by the charming, sly Regina King, is perfect for him. This isn't a movie about disadvantaged people who want their children to do better than they've done; it's about people who have worked hard and who want their kids to do at least as well as they've done.

But those are just undercurrents: "Our Family Wedding" isn't a social tract but a comedy, and in places it gives in to rampant silliness. There's a food fight involving wedding cake, and a straitlaced grandmother (played by the wonderful comic actress Lupe Ontiveros) who falls to the floor in shock and dismay when she sees her granddaughter walk through the door with a black guy. (When he politely tries to help her up, she slaps at him with the inefficiency of a baby seal.)

There are some weak links in "Our Family Wedding": Mencia is a little stiff with his lines, and the picture (which was written by Wayne Conley, Malcolm Spellman and Famuyiwa) features not just one but two Viagra jokes, which is two too many. And the movie loses steam when, inevitably but of course temporarily, the two lovers are torn apart by their families' differences. But Famuyiwa (who directed the 2002 romantic comedy "Brown Sugar") gets us through that patch quite swiftly, and almost all of the performers here — including Ferrera, who's characteristically appealing and fresh-looking — are completely in tune with the movie's good-natured vibe.

Those words I mentioned earlier, "clichéd" and "formulaic," are often used by critics and moviegoers to describe works that are a variation on things we've seen many times before. But what's the difference between a cliché and a convention? Conventions are ideas — visual, musical, philosophical, whatever — that resurface in culture again and again, for reasons that we can't always explain. Sometimes they're merely convenient shorthand; other times they represent a deeper kind of shared language. And sometimes a convention is simply something that a lot of us can relate to: For example, the silly, frustrating things that can happen when two families are thrown together by a marriage. (Lord knows that never happens in families in which everyone is white.)

At the end of "Our Family Wedding," the mariachi band hired by the bride's family plays Babyface's "Soon as I Get Home." Is it a cliché to show Mexican guys in big embroidered sombreros performing an unlikely song, in this case one that supposedly "belongs" to black people? Maybe. But I think the larger point is that the song belongs to everybody.