Five reasons not to get excited about the public option

Despite the latest twist from Sen. Dick Durbin, chances are a public option still won't be in the healthcare bill 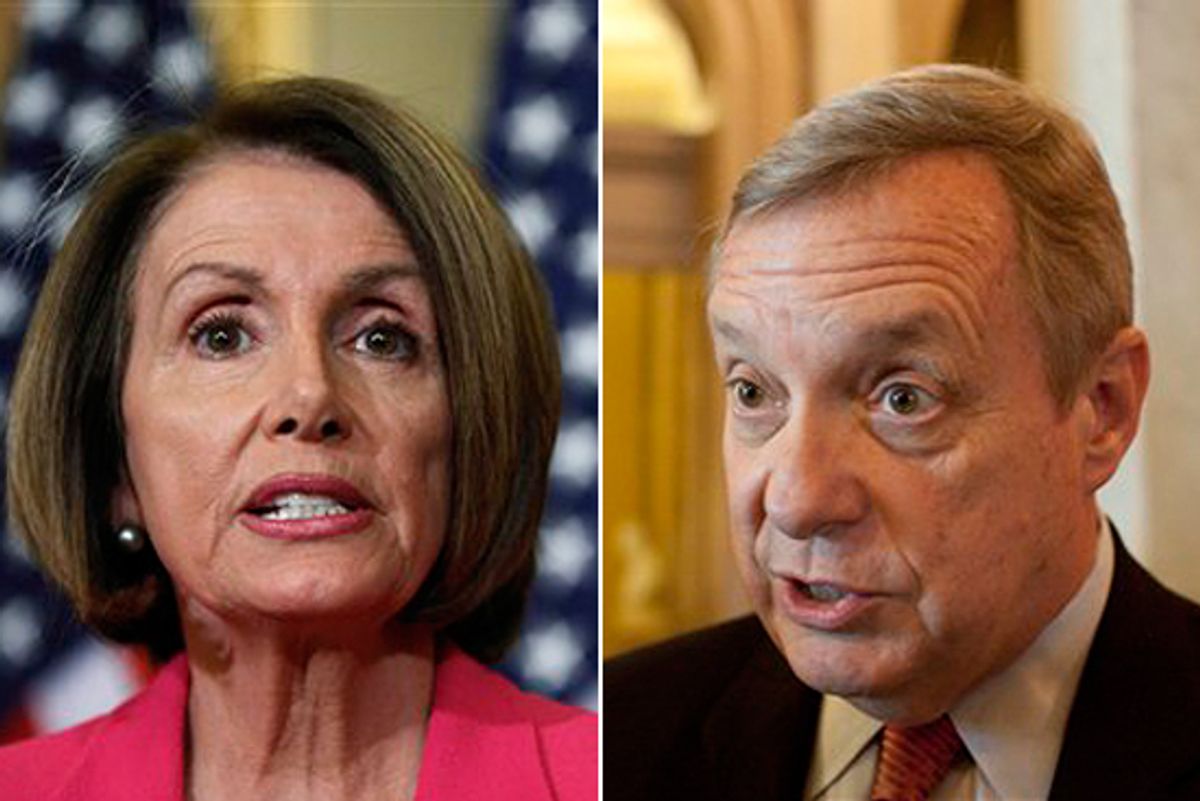 The word went out Friday morning -- the public option was alive again! "The votes and the leadership are there in the Senate, and the public option will live or die based on Nancy Pelosi's next moves," said a statement from a coalition of progressive groups that's pushing to include a public insurance plan in the budget reconciliation process that will be used to finish dealing with healthcare reform.

Apparently, Sen. Dick Durbin, D-Ill., the Democratic whip whose comments Thursday about rallying lawmakers to vote against a public option, had had a change of heart. Aides told the progressives -- and reporters -- that Durbin would whip lawmakers for the public option, but only if the House included one in a reconciliation measure. The up-and-down path the public option has been on since last summer was heading up once more. The Huffington Post splashed Durbin's comments on its homepage; things were looking good.

But don't open the celebratory bottles of government-insurance-program funded medicine quite yet. There may be more cause for pessimism than optimism over the public option's fate, even though Durbin's office says he'll "whip aggressively" for the plan if it makes its way over from the House. Here are the top five reasons not to get too excited about the latest development:

1) Durbin didn't actually change his position. Aides say Durbin, who has been a vocal supporter of the public option all along, never meant to indicate it was dead Thursday, and the pressure he got since then didn't bring him around. "There is no change in his position; it's exactly what he meant yesterday," spokesman Joe Shoemaker told Salon. "In the simplest terms, Durbin will whip against any attempt to alter or amend the reconciliation bill sent over by the House -- if it includes a public option, Leadership will whip for it and against all amendments to strip it out; if not, they will whip against any amendments to alter the House bill." Which means Friday's "news" doesn't actually change where things stand -- the House still needs to put a public option in the reconciliation bill.

Why is it all up to the House? For a combination of reasons. One, the House doesn't trust the Senate much farther than House Speaker Nancy Pelosi could throw Senate Majority Leader Harry Reid right now. (Which is not that far, even if Reid isn't the biggest guy in Congress.) In order to finish the healthcare bill, the House will have to pass the Senate-passed version, which House members hate, and only then take up a reconciliation measure designed to "fix" the bill. The Senate has to promise the House that whatever comes over won't be changed; otherwise, the House might not have faith that the Senate will actually finish the job. Two, the reconciliation measure, because it would raise some taxes, must begin in the House anyway. And three, the Senate parliamentarian told Republicans there Thursday that the Senate can't take up the reconciliation measure until after the House has passed -- and Obama has signed -- the underlying healthcare bill. Otherwise, it's not reconciling an existing law.

All of that means Durbin had plenty of room Friday to pass the public option buck over to the House, and look justified in doing it. Conveniently, of course, that also means the Senate is slightly off the hook if the public option doesn't actually make it into the reconciliation plan.

2) The Senate still might not have the votes for the public option, anyway. The Progressive Change Campaign Committee and its allies have done impressive work building up support in the Senate for a public option from 0 lawmakers on record to 41. But 41 is still short of a majority. The holdouts who haven't signed on so far include Evan Bayh, Kay Hagan, Mary Landrieu, Blanche Lincoln, Mark Pryor and Ben Nelson -- not exactly fertile ground for the public option. But liberals like Jay Rockefeller, of West Virginia, have also come out against adding it through reconciliation.

Could nine or 10 more votes for the public option be found, if the House includes it? Maybe, though it's hard to see exactly how. But will Democrats want to gamble on that if they aren't sure? Probably not. If a clear majority for adding the public option isn't there, chances are leadership won't put it in the reconciliation bill and risk seeing it defeated.

3) House progressives don't seem ready to go to the mat for the public option There was a time when liberals in the House said they wouldn't vote for a bill unless it had a public option in it. But that was months ago. Now that Nelson and Joe Lieberman have had their way with the legislative process, the White House has basically told progressives that the existing bill, with some additional changes via reconciliation, is about as good as it's going to get. "[President Obama] said the public option -- a well-known and long-standing progressive priority -- lacks enough Senate support to be included in the final package," Rep. Raúl Grijalva, D-Ariz., the co-chairman of the Congressional Progressive Caucus, said last week after a meeting at the White House. "However, he personally committed to pursue a public option after passage of the current bill."

That might wind up being enough to keep progressives from voting against the bill in the end; the argument that an imperfect bill is still better than the status quo is a pretty good one. (Remember, the bill would ban insurers from denying coverage to people with preexisting conditions or revoking coverage once patients get sick, as well as setting up a new exchange for people on the individual insurance market and establishing new subsidies to help people afford coverage.) So far, only Rep. Dennis Kucinich, D-Ohio, has said he'll vote against the bill -- and that's been met by ridicule by some liberal bloggers.

4) Does the House even have the votes for the public option? That's not entirely clear yet. Though the House-passed version of the legislation in November did include a public plan, some Blue Dogs have defected since then -- and for a bill that only passed with 220 votes, there's not much margin for error.

Democrats may have to make a trade to get the Senate bill through the House as it is. Rep. Bart Stupak, D-Mich., and other antiabortion lawmakers say they won't vote for the Senate version, because its restrictions on choice are less rigorous than the ones the House included. If the bill loses Stupak's block of about a dozen votes, there's no way House Democrats can afford to alienate any more conservative lawmakers by including the public option.

5) Why get excited about the public option, when the whole bill might still collapse? What is or isn't in the reconciliation measure is, for now, a theoretical question. The more pressing matter is figuring out whether Pelosi can wrangle the 216 votes she needs to get the House to pass the Senate's healthcare bill.

That's far from guaranteed right now. The White House has already announced that Obama will delay a trip to Indonesia next week, an admission that the deadline the administration had set for passing the healthcare bill -- March 18 -- won't be met. (But why should this deadline be any different from all the others that have been missed so far?) And no vote has been scheduled yet in the House, which is usually an indication that the votes aren't locked up yet.

In other words, there's still time for the whole thing to screech to a halt. Which means the public option wouldn't be the only policy that doesn't make it into law. No matter what Durbin says about it.