I was a QVC junkie

Our family didn't watch much TV. Then I discovered the sublime joys of miracle doo-dads and the Micro S'more Maker 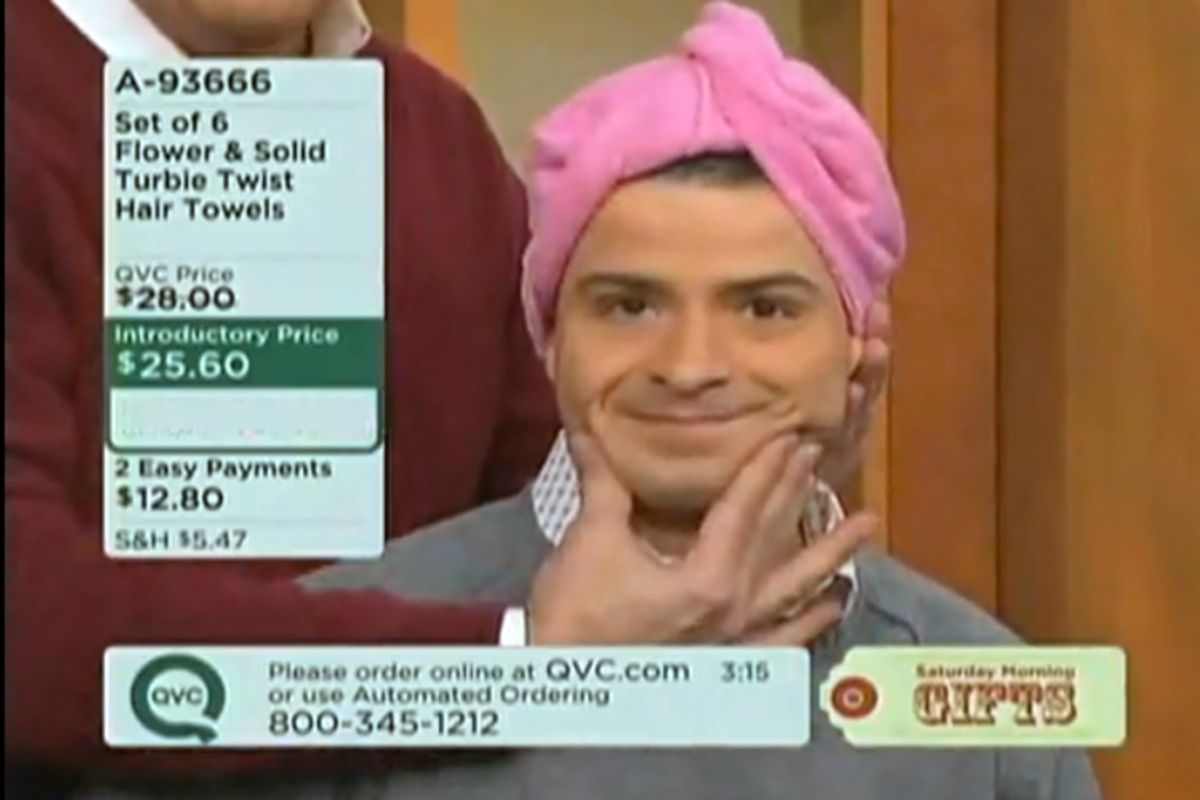 I was going to be one of those mothers who never allowed their children to watch anything on television, aside from the occasional educational program about stars, or baby possums or how All People Are Good. It was an idyllic, wholesome vision that was completely shattered around the time I discovered that the only way I could take a shower or make a phone call was to put the baby in front of "Teletubbies" for 15 or 20 minutes. The shattered bits were ground into a fine powder with the arrival of my stepdaughter, who could, at the age of 7, recite the entire plot of every episode of "Rugrats" with barely a pause for inhalation. We were a TV family. The only saving grace was that my son Sam really, genuinely hated most little kids' shows (particularly "Barney") and preferred to watch videos in which two dynamic types named Dave and Judy rode helicopters, trains and fire engines. But I digress.

The TV thing was reasonably well controlled for many years. We had "our shows," both those we were proud of, like "Curb Your Enthusiasm," and those that we kept secret, like my love of "The Hills." My husband, Rob, disliked the idea of watching things that "everybody watched," (a category including "Lost," "24" and "Friends") so we didn't watch a lot of those (and never missed them much), and Sam, despite his early time with Tinky Winky, was really never that interested in TV at all. I lied to other people about how much TV we watched, particularly when dealing with the progressive, Birkenstock-wearing crowd that made their own baby food, and Rob made fun of me for lying about it. I also lied about how much we loved shows that we never watched, in order to avoid offending friends who would rush home from a social gathering because Dr. Stubble was finally going to propose to his apocalyptically neurotic, alcoholic girlfriend. It was all good, in a twisted, vaguely disingenuous way.

Then, last fall, I had sciatica. I was too distracted to read anything complicated, and I couldn't sleep in our bed because I tended to roll over and cause the kind of pain that makes you bargain with God about just killing you right that minute. I ended up sleeping for nights on end on the living room couch (where there was no room to roll over), watching whatever was on TV. Very late at night, around the time that the bedtime dose of Vicodin wears off, there isn't much on besides Home Shopping. I loved the fashion, but I also watched QVC and HSN hosts sell lawn clippers, Christmas ornaments, storage containers, special face cleansing machines, stainless steel jewelry, ear warmers, scrapbook supplies, and some sort of lotion that contained actual bits of pearl and made 70-year old women look 25. I will admit here that I have an inexplicable preference for QVC, and a serious girl-crush on host Lisa Robertson.

Along the way, I often saw host David Venable of QVC, a tall, affable, Southern guy who is best known for selling food of various kinds - we have, for years, watched him for the sole purpose of laughing hysterically at the repeated pressing of various types and configurations of meat with the edge of a knife in order to show the gushing juices that guarantee freshness. He also makes a "yummy face" whenever he takes a bite of, say, one of Mrs. Prindable's improbably massive and lethally caloric caramel apples; this face involves a slight crossing of the eyes, a look towards heaven (whence comes the delicious morsel, no doubt) and often an audible "yummmmmm." I think Mr. Venable is really probably a very astute guy, but this schtick just amuses the hell out of us.

So recently, when Sam came home completely shot from a sleep-free "sleepover," he asked me to sit with him on the couch. That's code for "I'm going to fall asleep and I kind of want you to be there," a request that comes less often as he advances into the teen years. I made him a cozy nest of blankets and pillows, sat down at the end of the couch, and in two minutes he was snoring and I was watching David Venable on QVC. There were other choices, to be sure; I could have watched football, political talking heads, or probably an episode of "Bewitched," but I was spellbound by David. He was selling things related to food and cooking that were so patently, radiantly, captivatingly ridiculous that I could not look away. (He was also selling them with a straight face, and a great deal of passion, despite the fact that his own level of sophistication probably makes him painfully aware that he is hawking items designed to go direct-to-yard-sale. For that I tip my hat to him).

I got sucked in right away when I saw David instructing the viewing public on the fine art of making nachos. He was selling silicone bakeware with a solid frame so that it can be used like a baking sheet, and (through the magic of silicone) the nachos would slide right off when you were done cooking them. In case you've been wondering, nachos are made by placing a layer of tortilla chips on a baking sheet, followed by the toppings of your choice, and, eventually, a layer of cheese. I also learned that you can choose to "customize" your nachos by adding such esoteric tidbits as black beans or hot peppers, but mostly I was sitting slack-jawed, watching the nacho demo and wondering whether we would next be instructed on the finer points of buttering toast.

I wasn't far off, really. The next contraption was designed to allow you to cook a fatty meat in such a way that the fat dripped off the meat and into a container during cooking, so that you were not feeding your family disgusting globs of meat fat. The product involved a rack and deep pan, referred to as "a roasting pan and baking grid." This is not, in and of itself, a bad idea. I have, however, been cooking meatballs, meatloaf, and bacon for many, many years using my own cookie cooling rack (aka "baking grid") positioned over a 9x13 pan to catch the drippings. My guess is that if you are doing enough cooking that you are a) preparing things like meatballs from scratch, and b) aware that they produce a lot of fat during cooking, that you c) already own the equipment necessary to fabricate your own "Nonstick Meatball Pan" without paying $18.36 plus $6.00 for shipping. Despite the keen-grasp-of-the-obvious nature of the product, the orders rolled in; David poured the disgusting fat from the bottom of pan after pan into a clear measuring cup to demonstrate ALL THE FAT from which your family would be spared, and suckers everywhere ponied up. It was miraculous.

I stuck around for two more offerings, the first of which was a a set of cookbooks containing recipes from Home Economics teachers. The 5 books would be delivered once a month over a five month period, beginning with the compendium of "Casseroles." I have nothing against Home Ec teachers (although I don't think such a class even existed in my high school), but I am so offended by the idea that anyone would want a collection of ghastly easy recipes for pans full of glop bound with canned, cream soup and topped with Poppin' Fresh biscuit dough, crushed potato chips or those canned onion things that I will move right along to the final offering: the Micro S'More Maker.

If you are a fan of Alton Brown, you know about his aversion to "unitasking" kitchen implements. I tend to agree with him, and aside from a really cool apple peeler thingie that clamps to the edge of a counter, and those little skewers you use to eat corn on the cob, I don't have many one-note items in my kitchen. I like S'mores (only a Communist would not like S'mores), and I have made them many times over the years, mostly in the usual manner using a stick and an outdoor fire. I confess that I have entertained Sam by "roasting" marshmallows on a metal kabob skewer using the gas range top, and that I have paid a ridiculous amount of money at a restaurant serving S'more materials on a wierd, vaguely Tiki contraption with a fire in the middle and compartments for marshmallows, Graham crackers, chocolate and skewers. In the first instance I was making glorious, if somewhat dangerous alternative use of my kitchen equipment, and in the second, the purchase of the Unitasking Polynesian S'more Coffer was really the restaurant's problem, not mine.

Here, for your delectation, is the description of the product:

Enjoy s'mores whenever you want--no campfire required! Just load the Micro S'more with graham cracker, chocolate, and marshmallow; pop on the lid; and cook for 10 seconds. The domed cover helps ensure a perfect melt by cooking from the inside out.

It is, dear reader, a plastic container with a lid. Well, two plastic containers with lids. I would posit that it's really MUCH more fun for the average family to make S'mores while camping or (in our case) while seeing whether mom's hairspray will ignite than it could possibly be to sit around the living room waiting for the "ding" that indicates that the S'mores are cooked. Even if you use one of the Holiday S'mores Recipes included at no extra cost.

So I had a good laugh, and I still can't imagine who all of those people are who require nacho-making instructions, or are buying special meatball racks, casserole cookbooks or microwave s'more makers. On the other hand, I was mesmerized by the proceedings for more than an hour. I was watching later that night when they were selling silver jewelry that was meant to look like platinum, and which, according to the hostess, made the wearer appear "monied." Thank Heavens it's "Fashion Day" on QVC today, and they have accessories designed by Rachel Zoe, as well as an "Easter Surprise" every hour. I can actually watch while I work!

It has been suggested (with some force) that I watch something else, listen to music, turn the TV off or read a book. I can see that these are thinly veiled attempts at some kind of intervention. It's completely unnecessary; I don't actually buy anything, I just like watching people sell things, even if those things are totally ridiculous.