The right calls Obamacare "socialized medicine" anyway. So why didn't Obama push for the real thing? 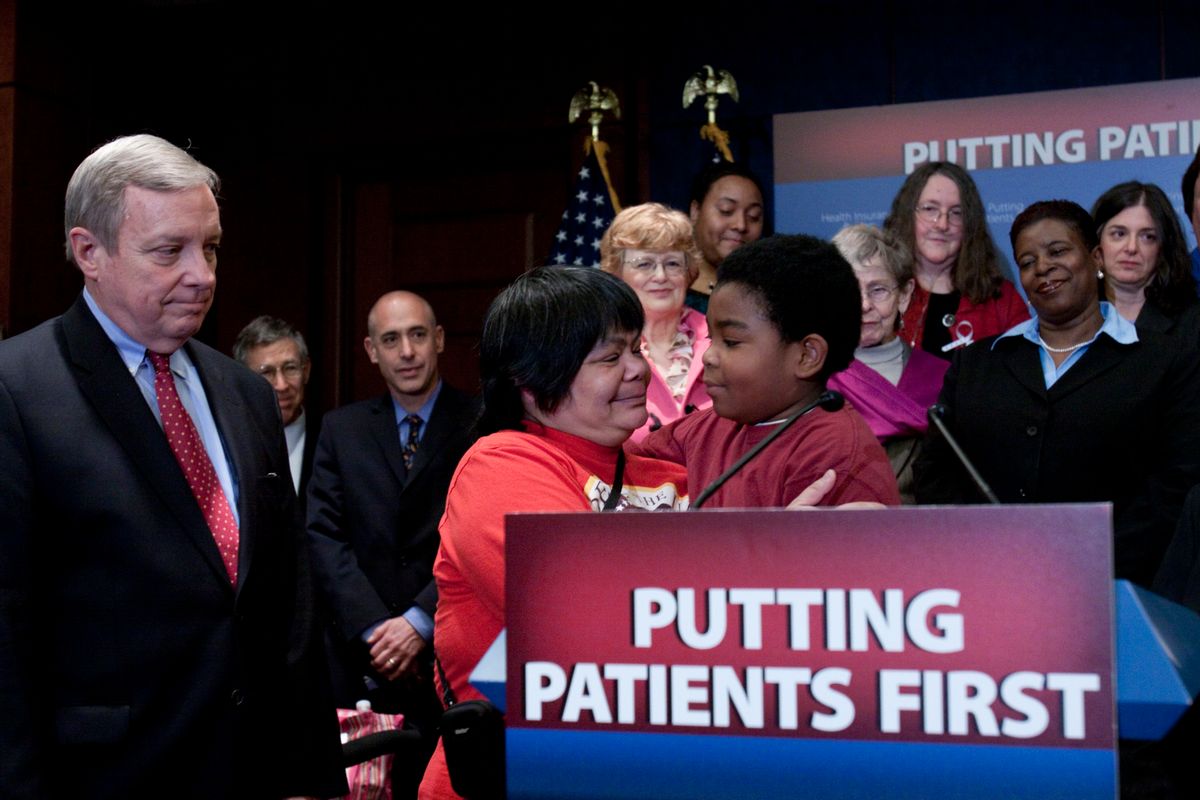 A last-ditch push to get a public option into the healthcare reform bill appeared to stall Thursday, as the No. 2 Senate Democrat, Dick Durbin of Illinois, said he'd tell colleagues to vote against an amendment to graft the public plan in using the budget reconciliation process.

Durbin was one of the 41 Democrats who had signed a petition calling for reconciliation to do just that, and the progressive activists behind the effort blasted him. "We need to make clear that strategy would be a major betrayal and signal to voters in an election year that Democratic politicians cannot be trusted to keep their word," an e-mail to supporters of the Progressive Change Campaign Committee said.

The public option, of course, was public enemy No. 1 for Republicans last year. The GOP falsely blasted the healthcare reform bill as "a government takeover of the healthcare system," claiming any public insurance plan would inexorably lead to long waits, medicine shortages, crappy care -- in short, Canada, or at least Canada as portrayed in Republican propaganda. (As opposed to the real Canada, where a poll last fall found most Canadians are perfectly happy with their medical system and think it's "far superior" to what we're stuck with in the U.S.)

But it's worth remembering that the public option -- even the relatively limited one that was in the House-passed version of healthcare reform, which would have allowed providers to negotiate with the government-run insurance plan, rather than tying reimbursement rates to what Medicare pays -- was a compromise to begin with. What most progressives wanted all along, of course, was a government takeover of healthcare -- a single-payer system, with a public provider mostly taking the place of the private insurance companies that are now fighting tooth and nail against even this relatively mild reform bill. Given the angst the bill has caused, and the rabidity with which the GOP has proclaimed it to be a government power grab, might Democrats be wishing they'd gone for the real thing instead, and actually pushed some kind of single-payer plan all along?

There's a certain political logic to the idea. Medicare, after all, is incredibly popular; one way the GOP has fought the reform bill is by scaring seniors that if the government fixes healthcare for everyone else, their own socialized medicine gravy train will come to an end. For that matter, so is the public option, which polls show voters like more than the reform proposals Congress has actually passed. And if you're going to get attacked for letting government take over healthcare, why not actually get some of the policy benefits of universal socialized medicine in the process? Call it Medicare for All, as proponents urged the public option be renamed, and charge full steam ahead.

Like so much else about the healthcare debate, it comes down to math. "I would say that in the Senate, there are at most 10 votes for a single-payer plan," Sen. Bernie Sanders, I-Vt., a self-described democratic socialist, who isn't shy about his own preference for that kind of solution, told Salon this week. "In the House, I have no idea but it's a small minority ... It's absurd to say, 'Mr. President, go forward and make your bill single-payer,' when you've got 10 percent of the Congress supporting you."

There are any number of explanations for why there aren't any votes for a single-payer plan; the massive campaign contributions and lobbying expenditures by the insurance industry and other big healthcare players surely didn't help the cause. But as the public option looks like it may, once and for all, be ruled out of the bill, it's worth remembering that even the Democrats in Congress are a change-averse bunch when it comes to healthcare. (After all, it was Democrats, not Republicans, who insisted on knocking the public option out of the Senate bill.) The writing was on the wall for the public plan for a while, even though it did make it out of the House; President Obama told key progressive lawmakers last week that the votes just weren't there, but even before that, the White House was being so blasé about the idea that it was hard to see the administration fighting for it. Sanders will introduce an amendment for the public option in the Senate, but if Durbin is going to whip Democrats to vote against it in the name of smoothing the reconciliation bill's passage, it's likely to be defeated.

Still, rather than taking that as a sign that the healthcare reform bill is fatally flawed, it's possible to see the failure of single-payer or a public option as a reminder of how difficult passing any reforms was going to be. It may be obvious to progressives that a single-payer plan would be better than the bill Congress is contemplating, but the bill Congress is contemplating -- with its reforms of the insurance industry and its expansion of coverage -- is still better than the status quo. That might be about the best anyone can hope for at this point.