"The Pacific" comes out with guns blazing

HBO's miniseries is a nightmarish depiction of WWII, but shouldn't a good war narrative offer more than that? 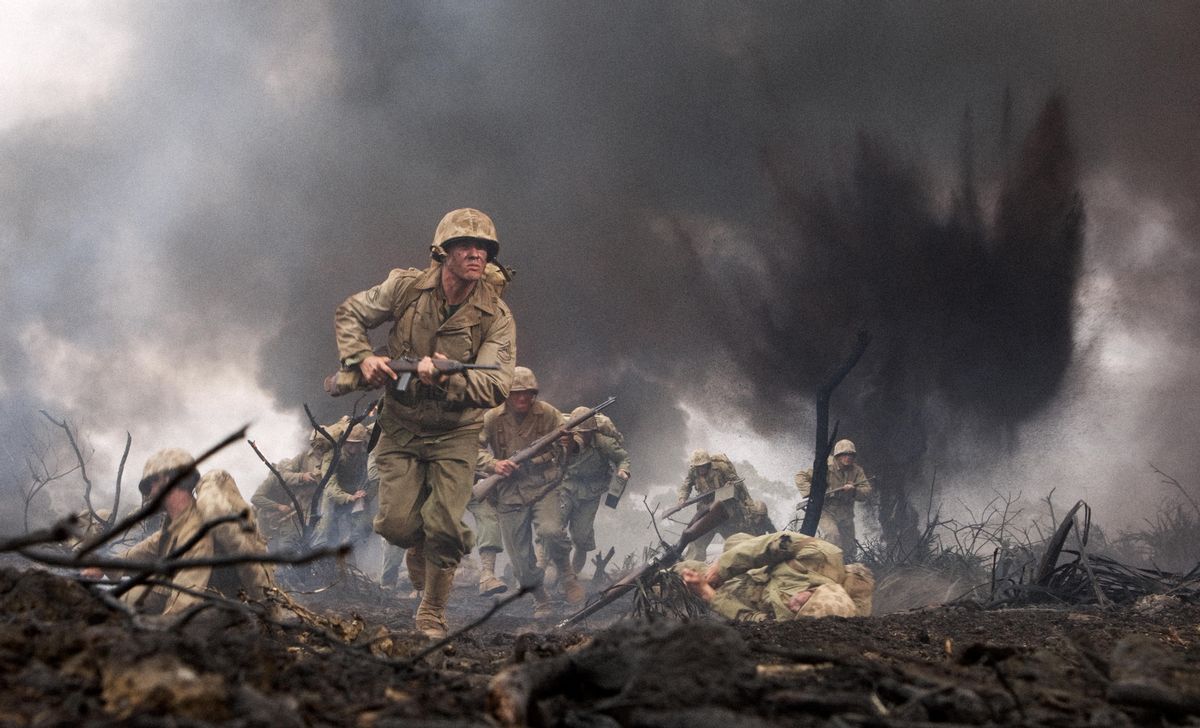 Despite these dark comments by executive producer Tom Hanks, the first few moments of "The Pacific" (premieres 9 p.m. Friday, March 12, on HBO) feel dangerously weighed down by sentimentality and machismo: We begin with a gentleman lighting a candle in church for his dead mother, then asking a pretty neighbor if he might write to her after he ships off to war. Next, we watch as an officer delivers a valiant speech to his Marines about the importance of the Pacific theater in the war. "We will meet our enemy and kill them all," he tells them with a heroic growl. After that, we join a family dinner straight out of a Norman Rockwell painting, with the sweet, idealistic dialogue to match.

Finally we join our young, hopeful Marines aboard a big gray battleship, gliding toward Guadalcanal.

Marine No. 1: Can someone remind me why we're here again?

Marine No. 2: We're here to keep the Japs out of Australia!

(Arguing, then someone asks Pvt. Robert Leckie to speak up.)

Leckie: You want to know why we're here? "Without a sign, his sword the brave man draws, and asks no omen but his country's cause."

Everyone is filled with awed respect for this thoughtful man who can quote Homer, but audiences at home may quickly long for Terrence Malick's "The Thin Red Line," in which every war cliché -- the brave hero who fights for his country, the fearless leader who calmly guides his men to victory, the beautiful wife who waits faithfully for her darling husband back home -- is blown out of the water with startling grace. Based on James Jones' novel about his experiences in Guadalcanal, "The Thin Red Line" is a brilliant intersection of art film and war film, pairing breathtaking footage of clouds and sunlight dancing across the grass with soldiers dropping dead from bullets zipping out of nowhere, or interspersing a thoughtful man's search for meaning among the native tribes of the South Pacific with his painfully visceral experiences of war.

Somehow Malick's soaring, melancholy portrayal of the Battle of Guadalcanal forces itself into the frame when watching "The Pacific," not just because the subject and source material are the same ("The Pacific" is also based, in part, on James Jones' novel) but also because Malick's $52 million film underscores the relative shortcomings of the $250 million HBO miniseries. Both works focus on the dramatic toll that this chapter of WWII history took on the souls of the men involved, but where Malick brought the immense sorrows of war to life with breathtaking lyricism, originality and imagination, executive producers Steven Spielberg and Tom Hanks and writer Bruce C. McKenna offer us their signature brand of straightforward storytelling.

Sure, their style worked just fine in the 2001 HBO miniseries "Band of Brothers" (about WWII in Europe), and it does the job here. The battle scenes are suspenseful and riveting, the dialogue is reasonably sharp, and the story advances at the same pace as the war itself did: There are harrowing nights on the battlefield that will make you grit your teeth in fear, and then there are months where our Marines -- who, except for two main characters, are difficult to distinguish from each other until a few hours into the series -- meander along trying to sort out the reason and purpose for this fresh hell. All of which is well and good, but if you're hoping for that extra bit of dramatic flair, if you're expecting one or two unusual choices, a little innovation, some imaginative filmmaking? You won't find it here.

Yes, our heroes do take a terrible fall from the sweet, bow-tied, red-lipsticked beginning of our story. The jungles of Guadalcanal, by all accounts, left no man's sense of optimism and belief in the glory of battle intact. But even after that, the lead characters find more to hope for: a little R&R in Australia, some love from an Australian girl, idyllic scenes where our boys bask in the sunlight all the while dreading their next deployment. Slowly, though, the grueling years of war take a toll on these lives: We can see it in the expressions of Robert Leckie (James Badge Dale), who seems so confident and optimistic at the start, but grows grimmer with each passing trauma and disappointment. Then there's Eugene Sledge (Joe Mazzello), a privileged kid whose doctor father tries to keep him from enlisting for as long as he can. These and all of the other characters in "The Pacific" are sketchy and incomplete at best. Mostly, we see their romantic notions chipped away by the cruel realities of war.

But do we feel what they feel? When they're fighting, we do. The battle scenes of "The Pacific" vibrate at a higher frequency and pull us into the darkness, crouching behind our rattling guns, our hands shaking in fear.

But in the slow moments, "The Pacific" doesn't mesmerize us in quite the same way. Quiet, subtle scenes require much more from our storytellers. To pull viewers into such lulls in the action, to make us feel the longing and frustration and loneliness that these men felt when bullets weren't buzzing through the air, when the sound of a bird chirping or the sight of a young girl picking tomatoes in her parents' backyard could break their hearts? "The Pacific" fails at this task. We don't understand these men, and the lulls between battle scenes feel like just that: lulls. This makes the battles themselves, while impressive, far less visceral. The stakes aren't high for us, because we don't care enough about these men.

Back in 1999, Terrence Malick was a best director Oscar nominee for "The Thin Red Line," but Steven Spielberg won for "Saving Private Ryan," which, despite that first incredible, heart-stopping scene at Normandy, trudged slowly over the same old hero clichés and tear-jerky landscapes we've seen in every war movie ever made. Now, here are Spielberg and Hanks 11 years later, teamed up again to draw out a far less nuanced, far less riveting portrayal of the Pacific theater than Malick gave us back then. If you adored "Saving Private Ryan" and "Band of Brothers" (I enjoyed but didn't love both), then "The Pacific" is well worth your time. But if you're sometimes left cold by the epic films that others gush over, if you're often lukewarm on Spielberg and expect more from a war movie than just realistic battle scenes, then I would skip the 10 hours of viewing time and rent "The Thin Red Line" instead. Turn down the lights, sit close to your biggest, best TV set, and give the movie your full attention. It may be the best war film ever made, and it will break your heart in two.

As unfair as it may seem to compare "The Pacific," a TV miniseries, to "The Thin Red Line," a film by one of this country's most celebrated directors, considering the talent and the millions of dollars that went into both, the comparison feels not only fair but unavoidable. "The Pacific" is a well-made war series. But as Malick and Jones understood like no one else, war isn't just a story told in chronological order, with characters who struggle with right and wrong, good and bad. War is pure madness. Without a spirit of madness infused in it, a war story doesn't come close to touching war's dark glimpses into the human soul.