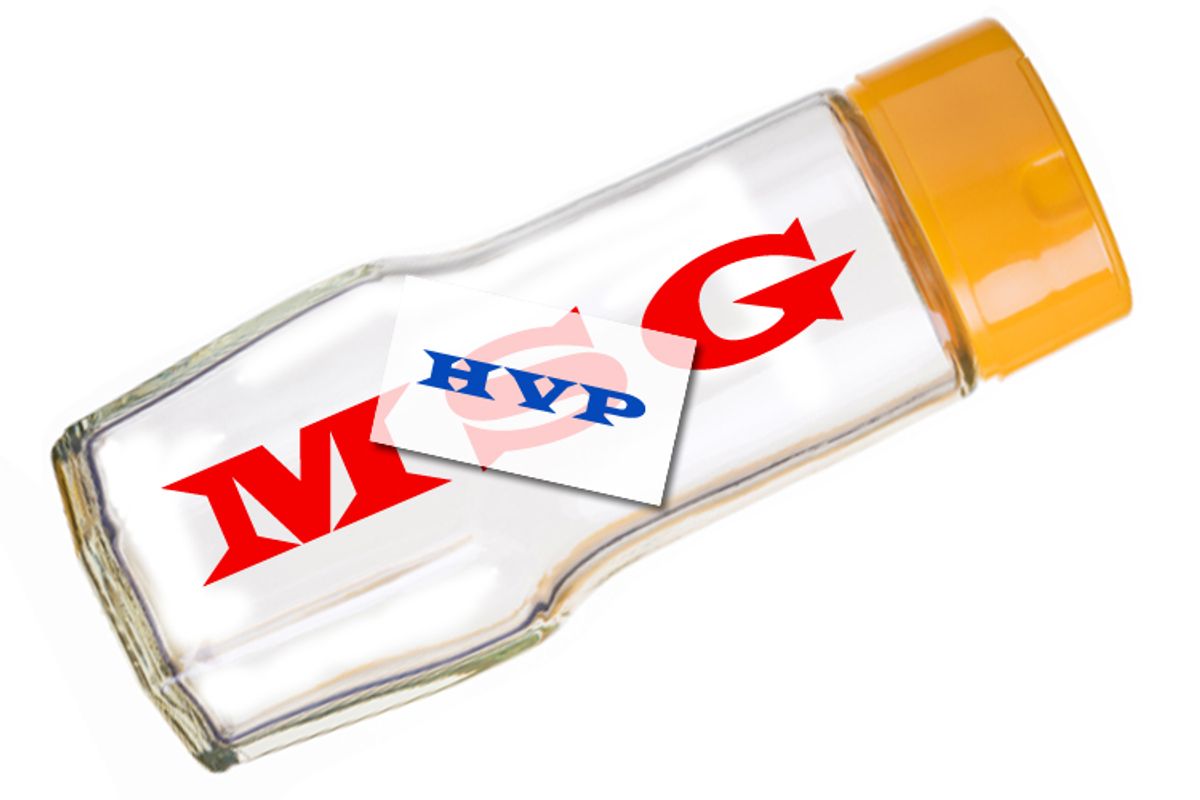 This week has seen a rash of foods recalled due to possible contamination with Salmonella Tennessee, ranging from selected flavors of Pringles to Herb-Ox bouillon to Quaker brand snack mix (see the complete list here). The common ingredient in all these products is hydrolyzed vegetable protein, or HVP, manufactured by Basic Food Flavors, in Nevada, where Salmonella bacteria were found on the processing equipment.

As the story unfolds, however, possible Salmonella contamination is not the only thing raising eyebrows about HVP, a flavor enhancer commonly used in processed foods. It turns out that the amino acid in HVP that is responsible for "enhancing" the taste of foods is glutamic acid. In its crystalline form, glutamic acid is more commonly known as monosodium glutamate, or MSG. Using HVP is a way for manufacturers to use glutamic acid to add flavor without using MSG -- and having to put those oft-avoided letters on the label.

Glutamic acid occurs naturally in many foods that are aged or fermented, like soy sauce and cheese. In 1908, a researcher named Kikunae Ikeda at Tokyo Imperial University discovered glutamic acid in a search to isolate the savory flavor of dashi, or kombu seaweed broth, a traditional and fundamental ingredient in Japanese cuisine. Ikeda named the taste of the isolated acid umami, and it's now recognized as one of the five basic tastes, along with sweet, salty, sour, and bitter. American chefs typically refer to the ineffable taste by its Japanese name, but it's sometimes described as being "savory" and "meaty," and is often most recognized as the aftertaste of mushrooms, ripe tomatoes, and, well, meat.

Ikeda’s isolation of the delicious umami taste led to the mass production of monosodium glutamate. MSG came under public scrutiny in 1968, when a Chinese-American physician wrote to the New England Journal of Medicine and described the symptoms of what he called Chinese Restaurant Syndrome -- including sweating, weakness, heart palpitations and headaches -- after eating Chinese food. The physician assumed that the symptoms were caused by MSG, and his theory became so well known that the additive was blamed for symptoms as far-ranging as numbness and chest pain, although studies have never shown a statistically relevant link.

In 1969, scientist John Olney coined the term "excitotoxin" for substances, chiefly glutamic acid, that overstimulated and destroyed brain cells in mice. In 1996, Dr. Russell Blaylock, a neurosurgeon, published "Excitotoxins: The Taste That Kills," a book that discussed a possible relationship between excitotoxins to neurological diseases in humans. Large-scale FDA, World Health Organization and United Nations studies have shown that normal consumption of glutamic acid is safe, but MSG continues to be shunned by many consumers. Of those, though, few recognize that HVP and MSG share the ingredient that Blaylock alleges is dangerous to health.

The FDA considers it misleading to put a "No MSG" label on foods containing glutamic acid, but the substance appears without calling attention to itself in food additives such as hydrolyzed plant protein, sodium caseinate, calcium caseinate, yeast extract, textured protein, autolyzed yeast and hydrolyzed oat flour.