The greatest 9,331 movies of all time

One man's nine-year quest to rank the best English-language films ever. Spoiler alert: There will be "Starman" 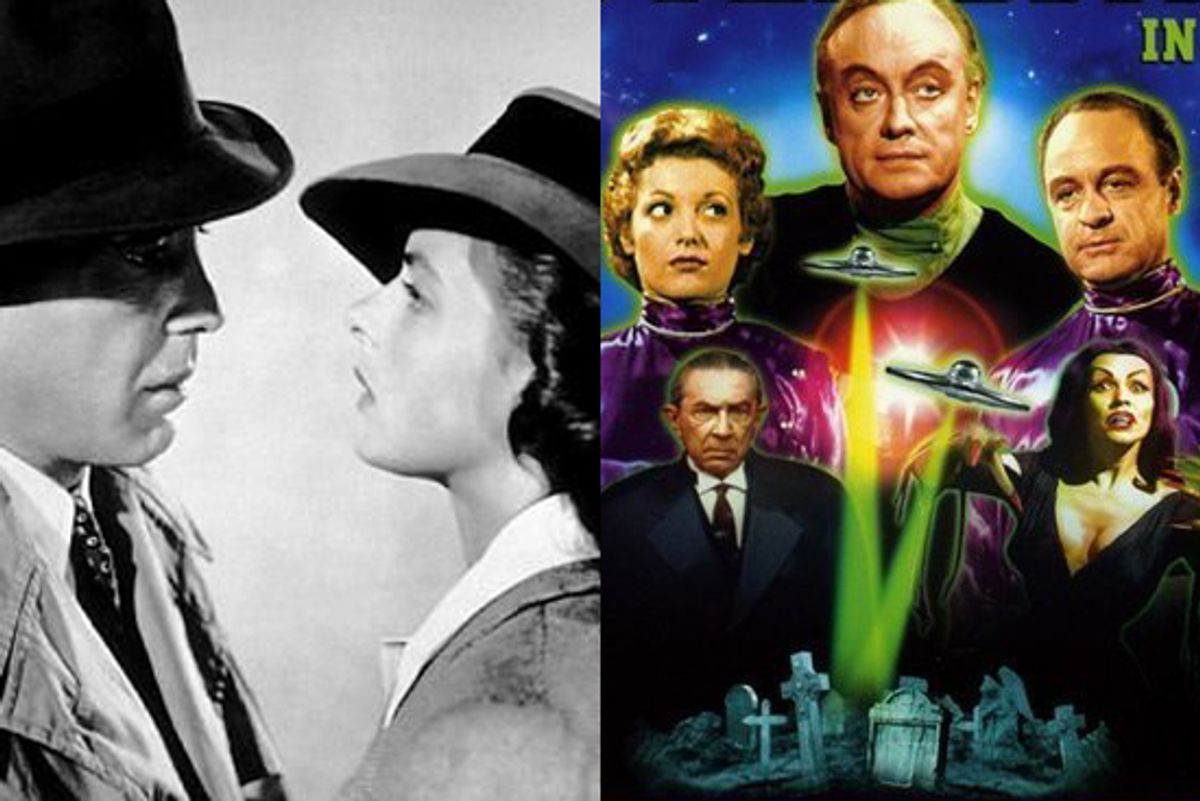 Whether you love them or hate them, "best of" lists are certainly something we can all disagree on. But no movie-list maker (that we know of) has ever gone to the lengths of Brad Bourland, 58, of Austin, Texas. "The Best, Most Important and the Most Beloved English Language Films of the 20th Century" ranks an outlandish 9,331 films. He says it's not done yet, either. He deliberately stopped short, because he wants the public to help him make it an even 10,000.

The project began back in 2001, when Bourland started with the reasonable goal of rating 200-300 films. At the time, Bourland, who works at a grocery store down the street from his home, wanted to keep his favorite movies from slipping into oblivion. But the list ballooned as Bourland tried to "do justice to all the best films." Nine years later, after spending more than 1,600 hours in seven libraries in three states, logging more than 4,000 hours on dozens of computers, and rummaging through 110 books, his project was ready for the masses. (Though it is, unfortunately, a Microsoft Word document.) The list primarily includes films made in the English language from 1927 to 1999, and excludes documentaries, made-for-TV movies, shorts and silent films. Even a list of the 10,000 greatest movies ever made needs some limits.

Bourland spoke to us from his sister's house in Austin about the brilliance of "Starman," why Roger Ebert rules, and what drives a man to such lengths.

Was this a hobby or an obsession?

It started as a hobby, and at some point I just realized: If I'm going to do this, I'm going to do it well. I feel pretty good about how it turned out. If somebody can do better, then go ahead and spend about nine or 10 years doing it.

What was your method for ordering such a massive list?

I strived to find a consensus between what fans, critics and the movie industry thought — I attempted to synthesize all those opinions. There are people who will look at my list and see their favorite movie is No. 784. I want people to understand that I haven't judged these films. It's not a personal Brad Bourland list. This is what Brad Bourland believes the number has proven to be, and that includes hundreds and hundreds of hours reading critiques from professional film critics, trying to understand how they saw things the way they did, what they're looking for, what they're hoping not to see, and so on.

Who is the best movie critic you've come across?

Roger Ebert is the greatest. I cannot tell you how fair Roger Ebert is. He excels at fairness. There are other critics just as schooled in filmmaking, but their critiques are not taken quite as seriously because they're not even trying to be fair. They've got it in for this director, or they don’t like anything this actor does, and so on.

Which film is the most underrated?

"Being John Malkovich" [No. 502]. It's different and brilliant. It's probably the best acting John Cusack ever did.

Somewhere between 2,500 to 3,500 it becomes somewhat subjective, but I kept applying the same exact rule that helped me put the first 3,000 together, and I think it worked. As long as I stuck to my method, I stayed on track. If it's an important movie, you can bet I listened to what 200 people had to say about it. In the end, I had to make the decision, but it was with lots of input from people who know movies. If a film's in the top 500, I've probably seen it 10 times because I wanted to be sure.

John Carpenter's "Starman" [No. 1,057] from 1984 is probably the film closest to my heart. There's an internal logic to "Starman" that is undeniable. I have watched that movie about 20 times over the years, and every single thing that Jeff Bridges' character, an alien trying to be human, does in that movie — whatever he says, whatever facial expressions he makes, whatever gestures he makes — he has been shown that action before. There's nothing he does out of left field. It's a brilliant piece of scriptwriting. They also have music passages for him, the lady he's in love with, and a third set of notes that go together for them. It's an old device, but it worked well. Carpenter put it together perfectly. I wish I could put it higher on the list, but I can't justify it.

How many of these films have you seen?

Fortunately in the last five years I've had the opportunity to see probably 6,000 to 7,000 of them. I would like to see them all. Unfortunately, some of the foreign ones, like the Australian and old British movies, are hard to see in America.

When you started this project, the Internet wasn't as prevalent as it is today. Has the Internet made your list redundant?

That is possible. But I still think my list is useful, especially to those who are looking for obscure movies — it's got a lot of those. I'd be the first person to tell you that the order is really not that important. What is most important is that the right movies are on this list. IMDb's been around before I got started, and they've got a great catalog of just about everything in the world. Generally, though, my ratings are more accurate than IMDb, for one reason: IMDb is really, really heavy on teenagers and testosterone.

Are you a list maker? Did you ever make lists as a child?

I've never made one in my life. This is it. I have an analytical mind, I guess, and it served this project.

Was there ever a point you felt like giving up?

About a thousand times. There were at least four or five times I thought to myself, "This is insane, why would anybody do this?" But I just kept going. I was going to ride it until it was done. I lost the entire project in 2003 and had to start over again. There were times it was like a ball and chain, but 90 percent of the time I couldn't wait to work on it the next day.