Hey, Gabourey Sidibe: Hate yourself yet?

Diet endorsement deals and career advice keep pouring in for the actress. She's not the one who needs help 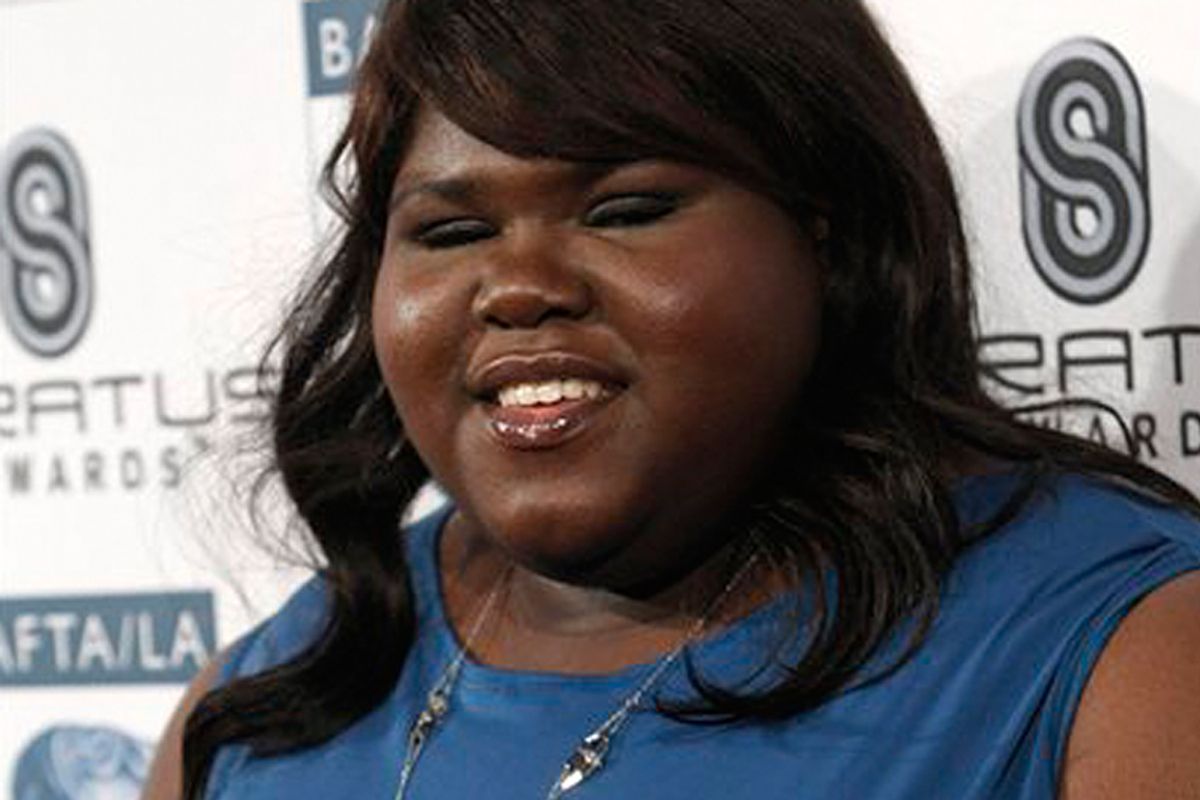 Gabourey Sidibe is obviously unhealthy and needs to lose weight if she wants to have a successful career. There, I said it!

No, I don't really believe a word of that. But apparently, anyone who says it this week automatically becomes newsworthy, and what the hell, I could use some buzz to help sell my next book. Sorry, Gabs, you know I love you -- let's just keep that between us for the moment, though, OK?

The latest person to successfully garner attention for concern-trolling the Oscar-nominated actress is the CEO of AcaiSupply.com, who made TMZ, among other outlets, by offering Ms. Gabby a one-year supply of weight-loss pills "in return for her glowing testimonial after she sheds her unwanted pounds." (I'm not sure if this company is one of the ones Better Business Bureau spokesperson Steve Cox was referring to when he said, "they lure customers in with celebrity endorsements and free trial offers, and then lock them in by making it extremely difficult to cancel the automatic delivery of more acai products every month." But if you like, I'll wait while you go to the Acai Supply site and see how long it takes you to find a working link to the news that after paying shipping and handling for your free trial, "You will be charged $119.93 in 14 days for our Free Refill Program unless cancelled.")

"After viewing recent pictures of you strolling around Santa Monica earlier this week," begins the CEO's letter to Sidibe, "we at AcaiSupply.com have decided we can no longer sit back and keep our mouth's [sic] shut! ... the only way you can reach your goal of someday winning that Oscar is by being active, fit and most of all healthy!"

And clearly, the way to become "active, fit and most of all healthy" is by taking pills you bought off the Internet. Snark aside, though, the guy does have a point. I mean, Gabby -- can we talk? -- let's be real here.  Posthumous Oscars notwithstanding, we all know how hard it is to win major awards unless you're clearly in the pink of health. As concerned people have no doubt pointed out to you, obesity is correlated with Type 2 diabetes, and do you know who has that disease and has also never won an Oscar? George Lucas. Are you going to tell me that's a coincidence?

Or think of Jane Fonda, who struggled with anorexia and bulimia throughout a large portion of her career -- and only won two of the seven Oscars she was nominated for. While at his "lowest point in terms of addictions," Robert Downey Jr. only won Golden Globe and SAG Awards for some stupid, girly TV show -- that's a big step down after an Oscar nomination for work he did while less high, am I right? Speaking of "Ally McBeal," that show barely won anything important while at least three of the actresses on it were suffering from eating disorders -- just a single Outstanding Comedy Series Emmy and Golden Globes for the show and Calista Flockhart, stuff like that. Before her untimely drug-related death, Judy Garland merely landed a juvenile Oscar, though she was nominated twice more. Similarly, Marilyn Monroe's most noteworthy win was a Golden Globe, John Belushi earned but a single Emmy, and Chris Farley got practically nothing but a gazillion dollars and an MTV Movie Award. Patty Duke only won one Oscar at 16 -- years after her allegedly abusive managers started providing her with alcohol and drugs -- and later, just three Emmys before her bipolar disorder (which may have been related to her anorexia, ongoing substance abuse issues and suicide attempts) was finally diagnosed.

I could go on, but I trust you get the picture, Gabby: History shows that when the Hollywood establishment spots someone who's obviously in ill health and/or engaging in self-destructive behavior, they're loath to ignore it and hand that person more jobs and awards anyway. Actresses suspected of having dangerous relationships with food, in particular, have a notoriously difficult time finding work; as you surely know, the only extremely thin women really thriving in the industry are those who maintain their weight by eating sensibly and chasing around after their kids, not those who resort to starvation, surgery or drugs. (And when an already thin young woman loses a substantial amount of weight, it's truly heartwarming to see how folks express their sincere concern instead of judging and turning away.) This is because Hollywood cares, Gabby -- just like anonymous Internet commenters and serious journalists and Acai berry diet pushers care, deeply, about your health.

Me, I don't care so much about your health, if I'm being honest. I mean, I wish you comfort, happiness, longevity and other good things -- but since I've never seen you look anything but radiant, you never appear high or drunk in public, you've spoken about how you've never been skinny and regular exercise doesn't change your size much, you apparently aren't struggling anymore with debilitating body-related shame and anxiety, and when the word "infectious" is used to describe you, it invariably relates to your charm and good humor, I assume you're feeling OK. And if there comes a time when you don't, I can't imagine why you and your doctor would be interested in my opinion on the matter, so I've gone ahead and filed the whole issue under "Not My Business; Don't Care." Please forgive me, Gabby, if that makes you feel that I, as a serious lady journalist, am not taking a sufficient interest in your career.

What I am interested in is the lack of good roles out there for women in general, and for fat women and African-American women in particular. I'm interested in the fact that most of these people expressing such deep concern for your health and your prospects as an actress are completely uncritical of the forces that usually keep women who look like you from landing big roles, because it's so much simpler to criticize you instead. I'm interested in the fact that even if you somehow starved yourself down to a size 0, you still couldn't do a damned thing about the fact that in 82 years, no woman with your skin tone has ever won best actress -- only one has even been in the ballpark -- and how that data point gets ignored while everyone's saying only your weight will prevent you from being the next Meryl Streep. I'm interested in how you've already, on your first frickin' try, scored a leading role in an award-winning film and been nominated for a best actress Oscar (not to mention practically every other possible award) and how even articles fretting about your future are full of casting directors singing your praises and news about your upcoming projects -- while the "She has no future" side is represented only by Howard Stern and an entertainment columnist. (I also love how said entertainment columnist sniffs, "the only roles she'll have a shot at playing will be down-market moms and hard-luck girls working at Wal-Mart"; Mo'Nique and Jennifer Aniston might disagree that such roles are the sign of a dead career.) I'm interested in why, as that same columnist says, "no one in the executive world looks like [you]," much more than I'm interested in whether a hypothetical thinner you would be easier to cast, in fact.

But still, I have my own career to think about here, and I'm not about to let this opportunity to grab an easy 15 minutes pass me by. I'm sure you understand the importance of striking while the iron is hot, Gabby.

So I'm saying it: Gabourey Sidibe is obviously unhealthy and needs to lose weight if she wants to have a successful career! Do you hear me, people? She'll never work again, much less win an Oscar, if she doesn't learn to hate herself like a normal fat person and get rid of all that weight that's making her look like she's at death's door every time she appears in public. I know nobody likes hearing it -- and certainly, nobody likes saying it -- but sometimes, a serious journalist has to go out on a limb and express an unpopular opinion like "Fat is bad." And now that I've bravely done so, I expect this post to go viral by morning, folks. My agent and I are counting on you.