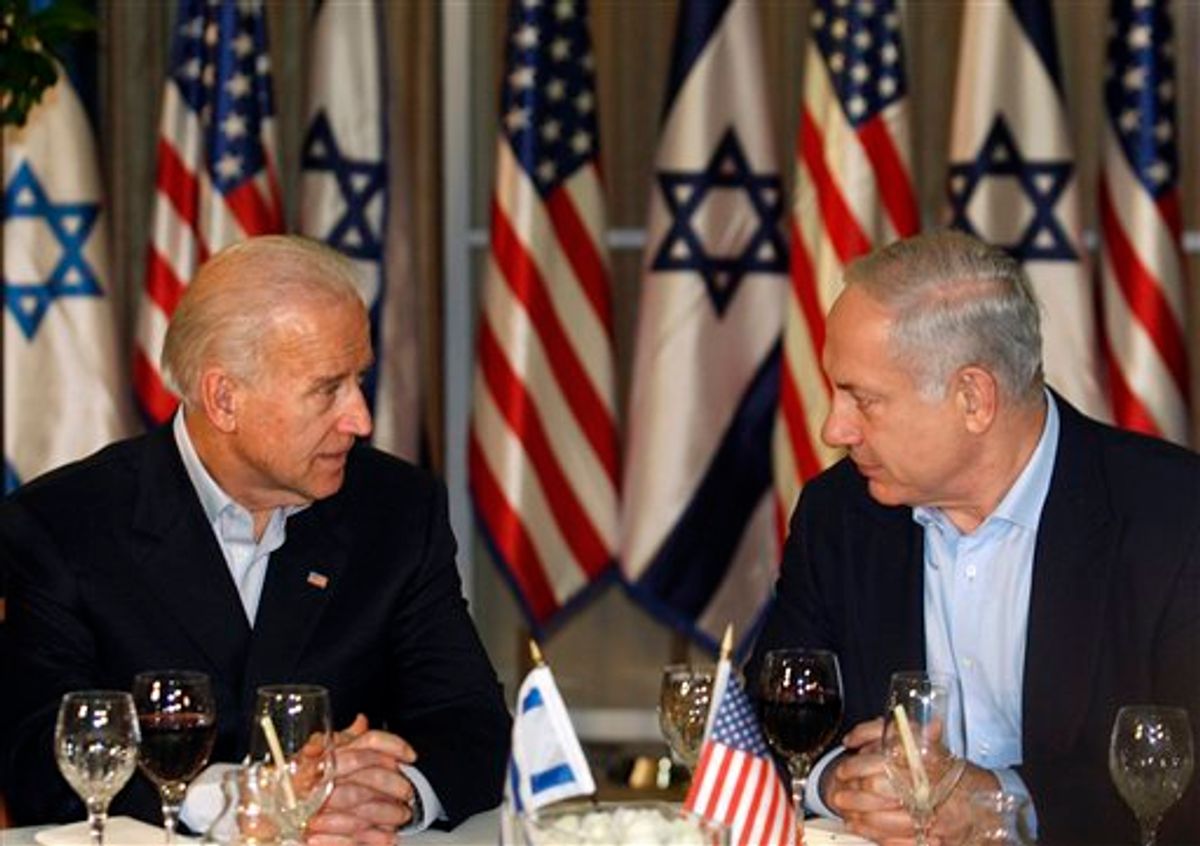 The rather extraordinary dust-up between the U.S. and Israel has, among other benefits, shined a light on two of the most taboo yet self-evidently true propositions:   (1) our joined-at-the-hip relationship with Israel is a significant cause of anti-American sentiment in the Muslim world, fuels attacks on Americans, and entails a very high price for the U.S. on multiple levels; and (2) many American neoconservatives have their political beliefs shaped by allegiance to Israel.

As for the first:  not only did Joe Biden tell Prime Minister Netanyahu that Israel's actions are endangering U.S. troops in the region, but -- more important -- as Foreign Policy's Mark Perry reports, both Adm. Mike Mullen and Gen. David Petraeus within the last couple of months stressed the same causal connection to Obama officials:  "Israel's intransigence could cost American lives."  It's rather difficult to maintain the fiction that only fringe Israel-haters see the connection between our support for Israel and Muslim hatred toward the U.S. when two of America's most respected military officials (responsible for U.S. troops in the region) are making that case explicitly.  Moreover, the Mullen/Petraeus alarm is almost certainly what accounts for the Obama administration's sudden (and commendable) willingness to so publicly oppose Israel.  As Perry says:  "There are important and powerful lobbies in America: the NRA, the American Medical Association, the lawyers -- and the Israeli lobby. But no lobby is as important, or as powerful, as the U.S. military."

As for the second point:  I've previously noted the glaring contradiction among neoconservatives, whereby they simultaneously (a) tell American Jewish voters to vote Republican because (they claim) the GOP is better for Israel and (b) insist that it's anti-Semitic to point out that some are guided by their allegiance to Israel when forming their political beliefs about U.S. policy.  Obviously, anyone who does (a) is, by logical necessity, endorsing the very premise in (b) which they want (when it suits them) to label anti-Semitic.  Neoconservatives constantly make political appeals to Jewish voters expressly grounded in the premise that American Jews are guided by allegiance to Israel (vote Republican because it's better for Israel), yet then scream "anti-Semite" at anyone who points this out.  When faced with this glaring contradiction, their typical response -- as illustratively voiced by Commentary's Jennifer Rubin, after she argued in a 2008 Jerusalem Post column that American Jews should vote against Obama because he'd be bad for Israel -- is to deny that "that the interests of the U.S. and Israel are antithetical" and insist that "support for Israel in no way requires sacrificing one’s concerns for America’s interests."  In other words:  to advocate for Israel is to advocate for the U.S. because their interests are wholly indistinguishable, even synonymous.

Yet here we have a major split between the U.S. and Israel, with key American military and political leaders explaining that the opposite is true:  that Israeli actions are directly harming U.S. interests and jeopardizing American lives.  And what is the reflexive, unambiguous response of virtually every American Israel-centric neocon?  To side with Israel over the U.S.  AIPAC, the ADL, Elliott Abrams, AIPAC-loyal Democrats in the House, Marty Peretz, Commentary, etc. etc. all quickly castigated the U.S. Government and defended Israel, notwithstanding the dangers to Americans posed by Israeli conduct and the massive price paid by the U.S. in so many ways for this relationship (by contrast, J Street called the administration's anger towards Israel both "understandable and appropriate").  There's nothing wrong with taking Israel's side per se -- one is and should be free to criticize one's own government in its foreign policy -- but incidents like this make it increasingly futile to try to suppress what is glaringly visible:  that (as is true for numerous groups in the U.S.) a significant segment of the neoconservative Right (which includes some evangelical Christians and some American Jews) are guided in their political advocacy by their emotional, religious, and cultural attachment to another country, and want U.S. policy shaped to advance that devotion.

On a related note:  there has been a long-standing effort to equate those who make this observation with anti-Israel hatred or even anti-Semitism.  Two widely-cited reports did exactly that with regard to me recently:  this pseudo-scholarly report from the Jerusalem Center for Public Affairs and this post on the blog of the American Jewish Committee, both of which hurl all sorts of ugly though trite accusations at me for daring to suggest that some American Jews are guided in their political advocacy by allegiance to Israel.  I'll just note that the author of both "reports" is someone named Adam Levick, who -- with extreme, unintended irony -- lists this as his biography on his Twitter account:

I'm an American who just made Aliyah (moved to Israel), and love America and my new country.

If you're going to try to render unspeakable the observation that some American neocons are devoted to Israel, it's probably best to have the crusade led by someone with a different biography (The Atlantic's Jeffrey Goldberg, who went to serve in the IDF as a prison guard incarcerating Palestinians, is probably also not a good candidate to lead that crusade).  As I've said many times, there's nothing wrong per se with harboring cultural affections for other countries -- many individuals in the culturally diverse U.S. do -- but stridently denying what is so obviously true, and smearing those who point it out, does more than anything else to make something innocuous seem nefarious.

Finally, the reason Israel engages in this intransigent, arrogant conduct is because it believes (with good reason) that U.S. officials will never be willing to (and, in any event,  cannot) take any real action against it.  At this point, the Obama administration -- as reflected by the excellent questions posed yesterday to David Axelrod by ABC News' Jake Tapper -- still seems far from ready to do so.  Still, there's no denying that the very public condemnation of Israel by the Obama administration is unprecedented at least over the last two decades, will produce benefits on its own (including sentiments like this and this being increasingly expressed even among those Obama supporters who don't typically speak out about this issue), and will subject Obama officials to serious political pressure and attacks, from which they ought to be defended.  It's true that none of this will ultimately matter unless the administration is willing to back this up with meaningful action -- i.e., credible threats to change policy -- but this last week was an important and substantial first step toward that vital goal.

Many of the issues I write most about here -- from civil liberties erosions and radical, lawless National Security State policies to the wars that justify them -- have their roots in our involvement in the Middle East, and our self-destructive, blind support for Israeli actions is a major (though not the only or even primary) factor in all of that.  It's impossible to care about the former without wanting to do something substantial about the latter.

UPDATE:  Former AIPAC official M.J. Rosenberg has more on the extreme and highly revealing AIPAC attacks on the Obama administration and the political strategy it intends to pursue.

UPDATE II:  Here's a perfect example of the glaring double standard I'm talking about:  hard-core GOP loyalists are today promoting this claim that the tension between the Obama administration and Israel will cause American Jews to stop voting Democratic and (according to John Podhoretz) stop donating to Democratic candidates.  The neoconservative Right has been making similar predictions for years with complete futility, but think about it:  what is the core assumption of such a claim?   That American Jews determine their political beliefs based on what is best for Israel rather than the U.S. -- exactly the "dual loyalty" assumption that, when made by others, this very same faction brands as anti-Semitic.

UPDATE III:  AP details the seriously nasty backlash now developing against the Obama administration from the Israel-centric Right, led by AIPAC, Joe Lieberman and John McCain.  Lieberman dismissed this as nothing more than a "family feud" and demanded that this all end.  You may have thought the U.S. and Israel are separate countries with the obligation to protect their own interests, but according to Lieberman, they're all part of the same "family" that should never publicly disagree, because doing so only helps Our Enemies, which (of course) we have fully in common.   Meanwhile, John Cole analyzes the neocon threats that the Obama administration will pay a serious political price for its defiance of the Israeli Government as a result of the upcoming AIPAC conference.