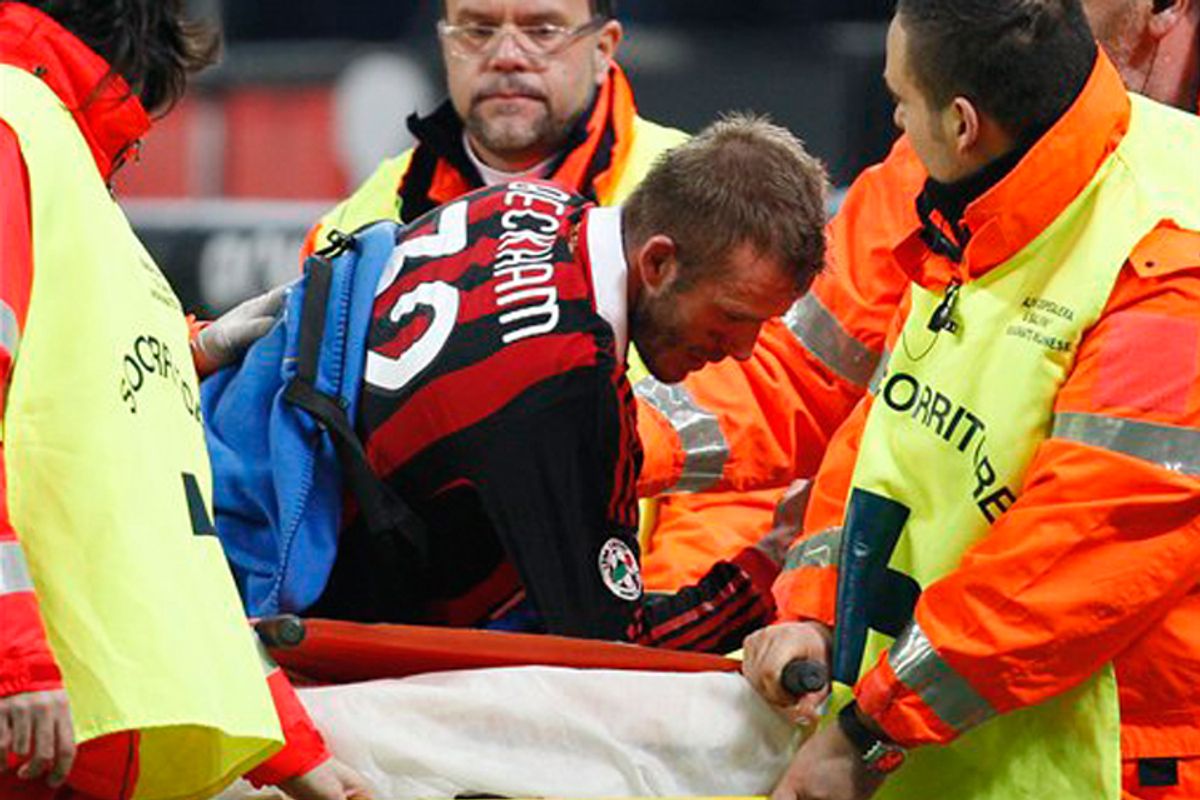 David Beckham leaves the pitch after being injured during a match on Sunday.
--

Unless David Beckham can mend it as well as he can bend it, soccer's now-limping glamour boy will miss this summer's World Cup -- a blow to tournament organizers, sponsors, TV viewers and average fans.

Beckham underwent surgery Monday for a "totally torn" left Achilles' tendon and is expected to be out of action for about six months, said Dr. Sakari Orava, who performed the operation. The 34-year-old midfielder was injured Sunday while playing for Italian club AC Milan.

"He will have to take it very easy during the next two to three weeks or a month, and then he will continue with a recuperation program slowly," Orava told The Associated Press. "The foot won't take much strain for two to three months."

Orava also said it would be "four months to running," and another two months before playing.

Beckham's spokesman, Simon Oliveira, said the tendon was completely repaired, and he expected Beckham to return to the game.

"David is expected to make a full recovery," Oliveira said.

That means Beckham won't be bending free kicks or curling pinpoint passes at the World Cup that begins June 11 in South Africa -- what he had hoped would be his fourth appearance for England at the tournament.

But most experts expect that Becks will eventually be back.

He has such a giant personality that his legacy may even grow stronger.

"While it's a horrible setback for the man -- everybody knows how much he would have loved to be at the World Cup -- his future is as bright as it's ever been because of the kind of following he's built up in the last decade," celebrity publicist Max Clifford told The Associated Press.

Beckham was injured in the closing minutes of AC Milan's 1-0 win over Chievo Verona. Walking with crutches, he was cheered by hundreds of fans as he checked into a hospital in Turku, Finland, after arriving by private jet.

"I hope to make a swift and full recovery," Beckham said in a statement before surgery.

On Sunday, a person familiar with the injury told the AP that Beckham "will miss the World Cup for sure." The person spoke on condition of anonymity because an official announcement had not been made.

"David Beckham is a household name," said Rich Mkhondo, a spokesman for the World Cup organizing committee. "If he had been at the World Cup in South Africa it would have enhanced spectator presence. We wish him luck and hope that he has a speedy recovery. We would love it if he recovers in time and is picked to play at the World Cup."

Even if Beckham's playing days are over, he has plenty of off-the-field commitments and earning power to keep him busy.

Beckham earned a reported $16.5 million in personal sponsorship deals in his first full season with the Los Angeles Galaxy of Major League Soccer. A separate company, Brand Beckham, receives his $5.5 million base salary from the Galaxy, the share of merchandising he generates for the club, and joint endorsements with his pop-star wife, Victoria, including their range of fragrances.

Beckham has sponsorship deals with Adidas, Motorola and Armani, among others.

"Brand Beckham is the most famous brand in world football," Clifford said. "He's become a star outside football. In terms of earnings, advertising, sponsors and offers, there is no reason the next two or three years should not be as successful as the last two or three years because of what he brings to the table."

"I don't know if we will see him in an England shirt again. I hope so," Charlton said. "I have known him for a long time and he gets a lot of pleasure out of playing the game. Forget about all the finance and the hyperbole that goes with it, he just loves playing football."

The bottom line: Never count Beckham out. He rose from humble roots in east London to become one of the most famous athletes on the planet. He's absorbed some major setbacks over the years, and always managed to bounce back and defy the critics:

-- Beckham was hung in effigy by some England fans after being red-carded against Argentina at the 1998 World Cup, only to come back as England captain at the 2002 tournament.

-- After a stellar career at Manchester United, he was dumped by manager Alex Ferguson in 2003, but went on to win a Spanish league title with Real Madrid.

-- Beckham tearfully relinquished the England captaincy after the team went out of the 2006 World Cup, yet managed to regain a place with national team and surpass the milestone of 100 appearances (he's now at 115).

Beckham is no longer considered a vital member of the England team, whose star player is striker Wayne Rooney. Although Beckham was likely to be picked for the World Cup squad, he was not expected to be a starter. He is now considered more valuable coming off the bench to provide a spark in the second half.

There's a good chance Beckham could be in South Africa as a face of England's bid to host the 2018 World Cup.

"He is a huge asset to the bid -- there is no question about that," Football Association chairman David Triesman said. "He is very charismatic and an extremely decent person who will do all and anything to help his country."

If Beckham makes a full recovery, he could return to the England team for its qualifying campaign for the 2012 European Championship. The first matches are in September.

Beckham could certainly return to the Galaxy and AC Milan if he wants.

"He'll come back from the injury. I don't think he'll want to retire on this note," former England teammate Andy Cole told BBC radio. "He'll work his socks off to try to get himself fit."

Milan would definitely welcome him back.

Beckham also has expressed interest in owning an MLS team one day.

"I want to be involved in the game in some way when I finish," he said in November. "Owning a franchise is something that's definitely possible and something that I'm really thinking about, and I think will happen eventually."

British brand consultant Simon Middleton said there is no reason Beckham won't succeed at whatever he tries, thanks to his enduring crossover appeal and upstanding reputation.

"I think probably in terms of world class football, his days have got to be numbered," Middleton said. "However, that doesn't mean his days as an icon and a brand are over at all.

"By and large he is one of those sportsmen who has managed to maintain his integrity. We've watched him grow up. He's made some mistakes and always bounced back. He's never lost that core admiration people had for him."