As Congress prepares to pass healthcare reform, the GOP predicts electoral doom. Why are Democrats listening? 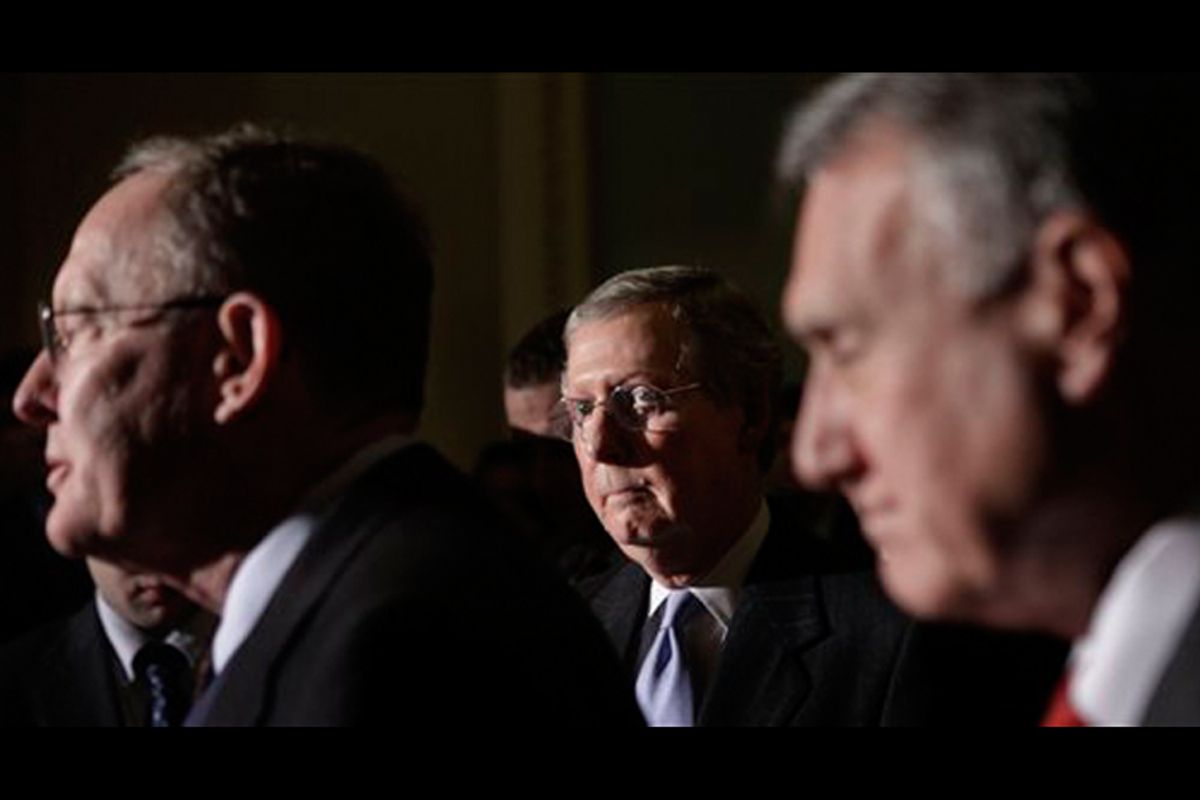 As the healthcare reform debate lurches toward what could be a final vote later this week, Republicans have suddenly started trying to be helpful. Not about passing healthcare reform; they're still not planning to pitch in on that. But GOP lawmakers can't stop offering Democrats free advice on the politics of the whole thing.

"From the day this passes, if it should, there will be an instant spontaneous campaign to repeal it all across the country," Sen. Lamar Alexander, R-Tenn., the third-ranking GOP Senate leader, told CBS News' "Face the Nation" on Sunday. "It will define every Democratic congressional race in November, and it will be a political wipeout for the Democratic Party." Alexander isn't the only one warning Democrats about their future; the entire Senate GOP leadership is getting into the act. "House Democrats will have to decide whether they want to trust the Senate to fix their political problems," Senate Minority Leader Mitch McConnell, R-Ky., told reporters last week. "I think their problems are just beginning," Sen. Jon Kyl, R-Ariz., said at a different briefing last week. Karl Rove, whose master plan for the 2006 midterm elections didn't exactly help the Bush White House, weighed in on Fox News Channel's "Fox News Sunday." " [President Obama] passes this thing, I think they lose the House of Representatives this fall," Rove said. Even Republican National Committee chairman Michael Steele is offering advice to Democrats. "Looking at the reconciliation fight that may loom ahead of us, it certainly will have represented a 'death panel' for the Democrats this fall," he said last month (bringing that extra rhetorical zest that only Steele can).

Of course, it should go without saying that when Republicans start chirping up with unsolicited suggestions for how Democrats can improve their political fortunes, Democrats would be wise to consider the source. The GOP isn't interested in helping Democrats avoid defeat this fall. This is so obvious that even typing it is hard to do without laughing, but just in case, here goes: Republicans want Democrats to lose in November's elections, early and often, if possible.

And yet, House Democrats still can't figure out whether they've got the votes to pass the Senate's version of the healthcare bill and a separate measure, using the budget reconciliation process, to fix what pretty much everyone agrees are problems in the Senate's legislation. Leadership aides say talks are still ongoing about exactly how to move forward, and when; a final vote may not come until Saturday, and even that tentative schedule is basically a guess.

Part of the agonizing comes down to legitimate policy disputes -- take Rep. Bart Stupak, D-Mich., and his dozen or so antiabortion Democrats, who say they can't vote for the Senate bill because it doesn't include enough restrictions on the ability of women who get federal subsidies for their insurance to have abortions. You may disagree with what Stupak is doing, but at least his opposition has something to do with what's actually in the bill. Same goes for Rep. Dennis Kucinich, D-Ohio, who says the legislation is basically a giveaway to corporate interests.

But then there's a not insubstantial chunk of Democratic anxiety that appears to come down to the same question Republicans are trying to guide them on -- "will voting for this thing mean I lose my seat?" Few of the lawmakers who are still waffling on what they'll do will explicitly say that, since the only thing likely to turn voters off more than a politician who does something they don't like is a politician who does something they don't like and says they're doing it to help their reelection campaign. Still, look at the 37 Democrats who voted against the bill in November, when the House passed its version; 31 of them represent districts that John McCain won in the 2008 presidential election, in some cases by far wider margins than the lawmakers won their own elections. It would be hard for many of them to deny that how the vote will shake out on the campaign trail is playing some part in whether these members will switch from opposing the bill to supporting it.

Not surprisingly, all that drives aides to the Democratic leaders in charge of passing the bill crazy. "Democrats listening to Sen. McConnell on healthcare is like a chicken taking advice from Col. Sanders," said Rodell Mollineau, a spokesman for Senate Majority Leader Harry Reid, D-Nev. (whose own political fate looks murky, but who's still aggressively pushing for the legislation). House Democrats don't think much more highly of the GOP advice. "[Republicans] are about the last people any Democrat should be listening to, especially since the GOP did absolutely nothing on healthcare for 12 years while the number of uninsured grew and premiums skyrocketed," said Doug Thornell, a spokesman for Rep. Chris Van Hollen, D-Md., who chairs the House Democrats' campaign committee. "If you think healthcare is such a political loser for us, why are you encouraging Democrats to vote no?"

Which raises an interesting notion. If it does begin to look like leadership will fall short on the Democratic votes needed to pass the healthcare bill, might a few Republicans want to vote "yes" to help push them over the abyss? Surely, if healthcare is such an albatross, the GOP would do just about anything to keep it tied to their opponents. Otherwise, it might just turn out that once Congress stops fretting about the bill and finally passes it, voters actually like some of what's in it.