How to bully centrists and influence Congress 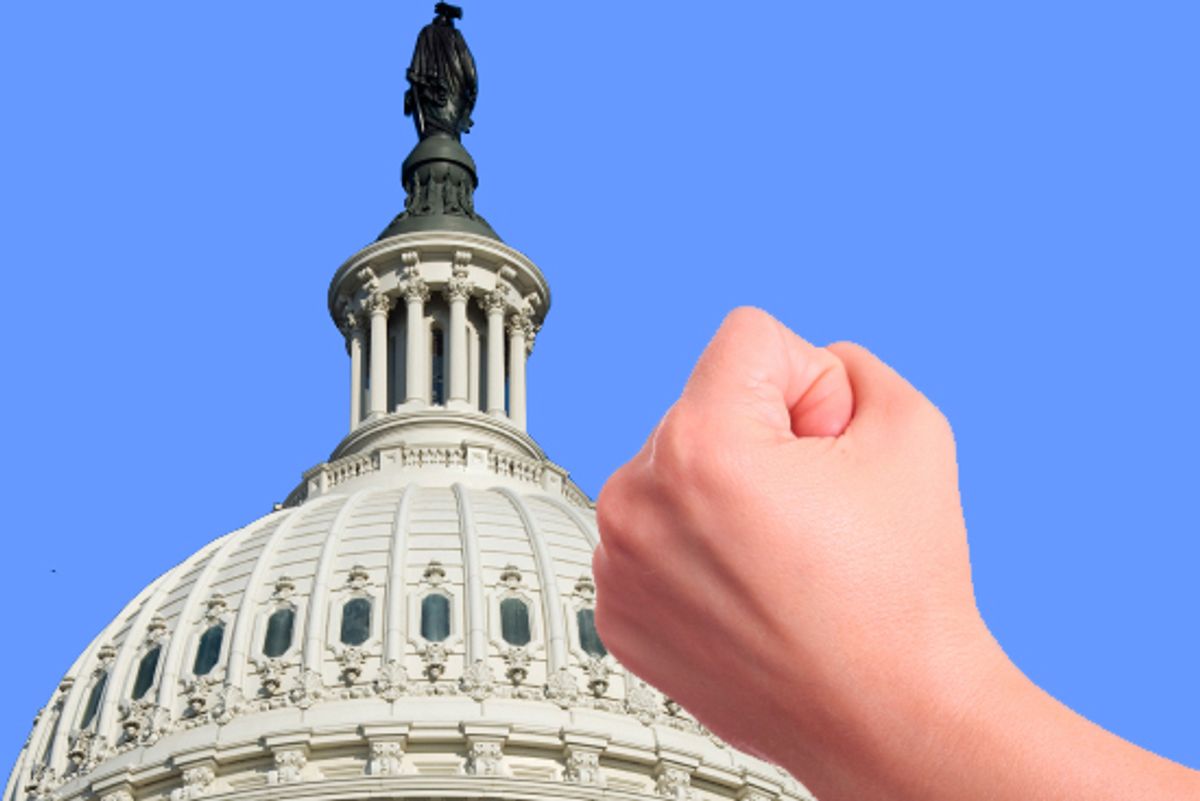 As long as healthcare reform has been on the national agenda -- that is to say, for longer than even the oldest and wisest sages can recall -- there’s been a simmering, sometimes boiling feud between the center and the left. The heat has gotten higher as Democrats, who began well short of the party base’s ideal (single-payer), have retreated from a strong public option to a weak one to none at all, compromised on abortion rights, and generally seemed like a pack of yellow-bellied sapsuckers. This is no news to anybody.

Liberal disaffection has, thus far, taken the form of opposition to the reform package. The "vote no" caucus has a good deal of backing in the liberal blogosphere, and in Congress itself. These folks may not succeed in pulling healthcare reform to the left, but they’ll certainly manage to drive President Obama and White House Chief of Staff Rahm Emanuel up the wall.

When, for instance, Rep. Dennis Kucinich, D-Ohio, opposes the president, it’s a pretty ineffectual move. His job is in no danger and the bill will likely pass anyway. He’s just widening the gap between the party’s leadership and its progressive base. But if voting no is counterproductive, it doesn’t mean liberals should just sit back and let the White House run the show.

The New York Times reported yesterday that labor activists are planning to run challenges against Democrats who oppose healthcare reform. Particularly in New York, where there’s already a line on the ballot for the labor-backed Working Families Party, the giant Service Employees International Union will offer a concrete reminder to Democrats of the costs of running for the center. SEIU chief Andy Stern told Politico that in many cases, voters "will have the Republican against healthcare and the Democrat against healthcare, and they’re going to ask themselves, 'Where’s the candidate that shares my values?' A lot of us would like to run another candidate."

Politicians everywhere need to be forced to do what’s hard. Franklin Roosevelt famously told activists harassing him on his left, "I agree with you, I want to do it, now make me do it." Individual Democrats in Congress are shooting their own party in the foot if they help kill healthcare reform. Political parties are fundamentally cynical, self-serving and pragmatic organizations; when they behave as such, a temper tantrum doesn’t fix anything. It’s not a plan to systematically apply the only kind of pressure that party leadership can understand.

What Stern and the SEIU are talking about, on the other hand, really is the kind of strategy that makes a difference. To see how politicians respond to this sort of pressure, you only need to take a look at Sen. Arlen Specter, D-Pa. A year ago, Specter was a fresh import from the GOP, and it seemed like a safe bet that, as such, he’d be among the Democrats’ more moderate senators. Now he’s a public advocate for the public option. You could think that he had a dramatic, sudden change of heart. Or you could take note of the significant primary challenge that materialized on his left, from Rep. Joe Sestak, D-Pa.

The SEIU claims, somewhat implausibly, that its candidates could actually win. Says Stern, "It’s a very volatile time, and no one should believe that third party candidates don’t have a chance." The criticism that he’s unlikely to create an American labor party in this fashion, and instead will just hand seats to the GOP, is probably more accurate. However, failing to pass healthcare will likely also hand the House to the GOP. Members who are willing to let the party fail on its most crucial issue are fundamentally of little use anyway. This is a life-and-death legislative situation. It’s worth asking which is more useful to the liberal agenda: having Democrats around like Staten Island’s McMahon, who oppose reform? Or having Republicans in some of those seats, and Democrats who are genuinely mindful of their accountability to progressives?

Put it another way: What’s the point of piling up a majority of 253 Democrats in the House of Representatives, if 37 of them are willing to let the healthcare reform fail and endanger the party’s majority? In that situation, someone’s got to play the heavy. And it sure isn’t looking like Obama will do it.