A reggae "Under My Thumb"? An off-key "Ruby Tuesdsay"? Even the Rolling Stones can't save this sinking ship 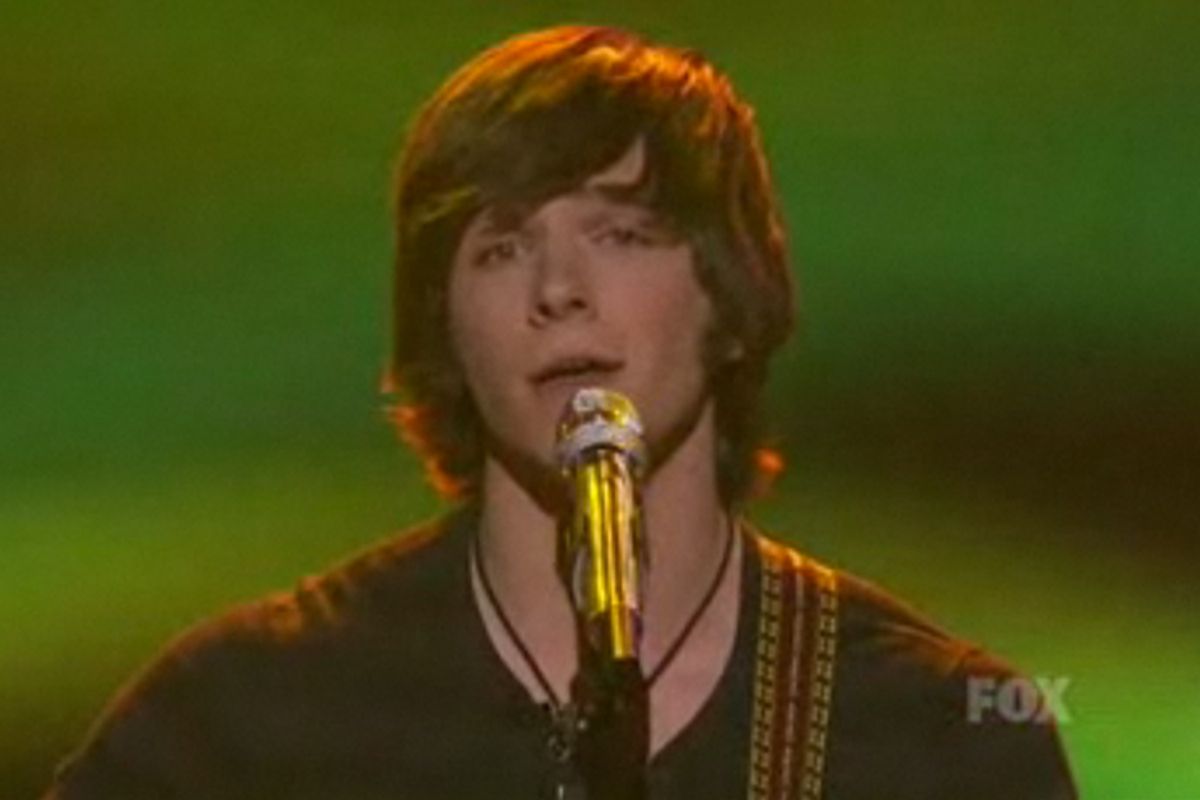 Tim Urban singing "Under My Thumb" on "American Idol" on Tuesday.
--

Could the Rolling Stones revive Season 9 of "American Idol"? In a word, no. I came to Tuesday night's competition disgruntled, disappointed and highly skeptical. I used to be a believer back in the day, when "Idol" produced greats like Kelly Clarkson, Carrie Underwood, Jennifer Hudson and Chris Daughtry. I should have known better when Adam Lambert didn't win and sworn off "American Idol" forever, right then and there.

But I'm ever the trooper, and for what?  To watch Lilly Scott go home and doe-eyed Katie Stevens stay? To see talented Todrick get booted so Tim Urban, a cute but talentless kid, can remain?

Tuesday night's theme was the music of the Rolling Stones, and I could envision Mick Jagger pouting already.

Michael Lynche: Michael's mom died a couple of years ago, so she couldn't be at the show to watch him. He had already captured the hearts of America when he missed the birth of his first child because of the auditions (it clearly doesn't take much to capture the hearts of Americans). Michael sang, "Miss You," and I didn't. Lynche's rendition did nothing for me. He closed his eyes too much. It's hard for me to trust a guy who closes his eyes while he sings.

Randy thought he "slayed" it and Simon thought it was corny.

Didi Benami: I wondered if this was a competition about who had the bigger Mom sob story. Didi's mom is alive but couldn't handle watching her daughter compete, so she wasn't at the show. I thought, "Who cares?"

Didi sang "Play With Fire." Oh, I liked Didi. She came off as rough, tough, soft, sexy and no-nonsense. Her voice was strong, she sang with emotion and I believed her. What was with those hand-waving fans, though? Those hands were a corny distraction. All in all, I thought it was Didi's best performance yet.

The judges all agreed with me, and Ellen added, "You made the word 'fire' two syllables, which was gurr reat." Now that was really corny.

Casey James:  Casey's story involved his mom and dad, who were divorced when he was four, and a single-mom sob story ensued.

Casey sang, "It's All Over Now." I hated this song right from the start. It was irritating and grating to my nerves. Did the Rolling Stones really sing this song? This was country gone bad. I thought it was a horrible song choice. I used to love Casey, and (you guessed it), it's all over for me now.

Randy and Ellen loved it. Kara was relentless in her passion for Casey: "Last week you were trying to be a rock star. Tonight, you WERE a rock star. This was your best performance!" I was nauseous.

Lacey Brown: What? A supportive family? No sob story? Lacey's father is a pastor, and Lacey's been singing mostly in church groups. Lacey's parents were sitting in the audience glowing with pride and I went, "Ah."

Lacey sang "Ruby Tuesday." Her version sounded more like a Beatles song than a Rolling Stones one… there were violins and, once again, those damn waving hands from the audience.  Please get rid of those annoying waving hands! Lacey sounded way off key. She sounded jittery and nervous and I was left wondering if she had had too much Red Bull. Then she sat down for the rest of the song… a sure kiss of death for any song sung. I'm glad Lacey's parents love her. She will need their support sooner than later.

Randy: "Yo, very interesting. I was pleasantly surprised." Randy had been hypnotized by the waving hands.

Andrew Garcia: Andrew's parents got out of the gangs and gave Andrew a better life. Who couldn't love this story? Oh no, Dad started crying. Sorry, maybe I've become too hard-hearted, but these stores have nothing to do with talent. I was getting tired of being jerked around. Maybe the next big reality show could be, "America's Top Sob Stories."  It would be an instant hit.

Andrew sang "Gimme Shelter," and I liked it, but  I would have liked to have seen more emotion and passion conveyed.

Katie Stevens: Kute Katie had the whole family there, plus her older brother's college friends. I sensed trouble from those college friends. Katie said she wanted to put Connecticut on the map. I think Joe Lieberman has already done a pretty good job of that. Katie shouldn't want any more attention drawn Connecticut's way.

Katie was dressed like an angel and sang, "Wild Horses." As Katie sang her song, I was praying that wild horses would stampede my house and drag me away. Katie had a great voice, but nothing will make up for her age except time.

Simon: "This is the only week where you've actually chosen a really strong song. That was a clever song choice. I didn't like the second half of the arrangement because you lost the emotion. But you made a difference and gave it 100 percent. Well done."

Did anyone else get the feeling that the judges had lowered their expectations this week?

Tim Urban: Tim grew up in a family of 10 kids, five boys and five girls. I could relate, being one of seven. Wow, Tim's parents actually articulated sentences that made sense. This was a feat for parents with 10 children. I gave Tim's parents a lot of credit for still breathing.

Tim sang "Under My Thumb." I kept nodding off and I wasn't even tired. By the time the song was over, I was sucking my thumb. Tim attempted a reggae version, and Tim and the song sucked.

Ellen: "I felt like I was at a resort drinking a Pina Colada. It just wasn't great." Yup, that pretty much summed it all up.

Siobhan sang "Paint It Black." It was the best performance  so far, but I wanted Siobhan to move her body and express herself more. It felt too contained. But I was way outnumbered, and all the judges thought it was the "standout" performance of the night.

Lee Dewyze: Lee was living paycheck to paycheck, working at a paint store. Sorry, but Lee can go stand in line with the millions of other Americans in the same predicament.

Lee sang "Beast of Burden."  It sounded like Lee had a mouthful of gum. He was singing a soulful, sexy song that took him awhile to get turned on to. Unfortunately for Lee and the female viewing audience, it wasn't seductive in any way.

Randy: "Yo, yo. You're an amazing singer, and you really came home for me. It was dope and one of your better performances." Randy had been smoking dope and needs to stop saying "dope."

Ellen: "I was expecting more, but it almost didn't come together, like a hospital gown." Do you get the feeling Ellen comes up with these ridiculously stupid things to say beforehand and looks for places to insert them?

Paige Miles: Oh geez, Paige's father was paralyzed and died when she was three. That was a legitimate sob story. Yikes.

Paige sang "Honky Tonk Women" after suffering from laryngitis during the week. Was she wearing hot pants? Too bad Paige's singing wasn't so hot. All I heard was a lot of shouting and screaming about nothing, although I needed to cut her some slack due to the throat infection.

Randy: Never mind…you know the drill. His response included "yo" and "pitchy." Ellen and Kara's comments were forgettable. I wished all three of them had laryngitis.

Aaron Kelly: Aaron came from a small town and was legally adopted when he was five. Okay, I won't say a bad thing about Aaron. Any kid that got adopted at five went through some tough times, times maybe we should never hear about and he should never remember.

Aaron sang "Angie," and he did great. He sang with his heart and his voice. Aaron was growing up before our very eyes.

Randy: "Yo (grrrr) Aaron. You were born to sing. Love the tender moments. It was hot." Randy also needs to stop saying "hot."

Kara: "I liked it, too."  Kara used her hands a lot, and I finally figured something out. Kara's not obnoxious, she's Italian.

Crystal Bowersox: Crystal's daddy got all emotional. Damn it all. Daddy's tears got me all teary.

Crystal came out with her guitar, singing, "You Can't Always Get What You Want." I loved the way she sang it. However, I would have loved to have seen her lose the guitar and move around a bit, let loose a lot.

Simon: "You came out here tonight 100 percent the clear favorite and you chose a song which didn't have what you needed. This is the first time where I think you were beaten by Siobhan.  You've got to dig deep week after week." Crystal replied by saying she had "a lot on her mind."  Focus, Crystal, focus.

For me, the clear winners tonight were Siobhan, Aaron, Crystal and Didi.

Only one person will go home tomorrow night and that person has to be, should be, ought to be, no other logical reason to keep this person in the competition... Tim Urban. However, the sad truth is that logic has nothing to do with who wins and who loses on "American Idol." Paige, Lacey or Andrew may be going home. Katie could be going home. Hell, all five of them should exit stage left. No matter. If it's any of the above, their departures will not be any big loss for "American Idol," its fans or the Rolling Stones.