A CNN story kicks up the old debate: Should kids be allowed on planes? 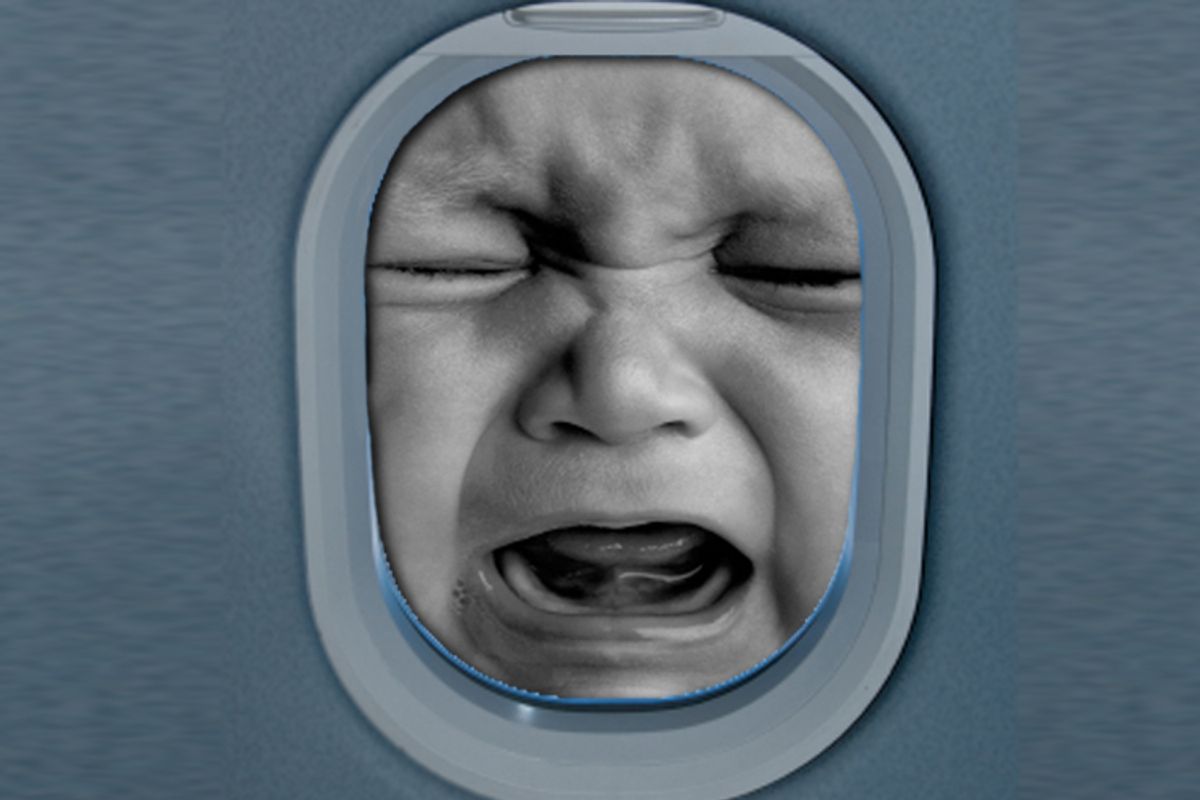 Most us would agree that modern air travel is pretty much a flying ship of fools. The seats are too small, the passengers too big, and somebody may have explosives in his underpants.

But when, last month, CNN covered the story of a passenger kicked off the jauntily named Jazz Air for having "brutal" B.O. , the comments section of its Web site lit up with complaints about the most despised menace of all in the friendly skies: babies. On the one side, there was the sentiment summed up by the poster who wrote, "Babies should be banned from planes, movie theatres, restaurants, and any other public place for that matter. The rest of the world don't think your kid is as cute as you do." And in the other corner were requests like, "Can we just ban annoying, whining adults from planes who complain about children? Or maybe we can give them Nyquil so the rest of us with a heart don't have to deal with them."

Such was the fury over the issue that last night, CNN posted a follow-up specifically on babies and air travel, featuring advice from a psychologist who says, "The other people on the plane do not have to be subjected to your child crying. It is absolutely not something that they should be expected to endure. They can't leave. So if you're flying, it means that you may have to get out of your seat and walk around, pace the airplane and make sure your child has a pacifier and a bottle. You may be tired at the end of the trip, it may not be a great flight for you, but that's your job as a parent."

In 10 years of parenting, I have flown roundtrip with my children exactly three times, so I have way, way more experience listening to other people's babies scream and having other people's toddlers kick my seat than anyone has putting up with mine. And I've still got to say: If you think you "absolutely" should not be expected to endure children fussing on a plane, you are going to be one miserable, bitter traveler. Oh, wait! Maybe you already are!

As soon as the CNN story posted, the commenters again came out swinging, racking up nearly 3,000 posts in a matter of hours. While many took the rather reasonable stance typified by the poster who said, "Wow, we do live in a society and babies are a part it," others had a somewhat dimmer view.

"I do not want to hear babies screaming on a flight. Period," wrote one gentleman. "When I travel, I am usually working and very tired. I use the flight to catch up on rest. If your child cannot stay quiet, or at least be quieted down quickly, then don't fly with them, because you will hear from me directly." I'm sure he's a delight with the flight attendants, too. Of course, the old chestnuts were also in heavy rotation: "You are selfish and only thinking of yourself," wrote one user, while another added that, "If as a parent you are unable to adequately handle the rigors of parenting in various stressful situations (such as an airport) then perhaps you should not have had children to begin with."

But perhaps even more deeply at odds with reality were the commenters who echoed the CNN story itself, the ones who blithely observed, "Think ahead of every eventuality beforehand and be prepared for it. Apart from one instance when one baby was sick, I have never had an unruly, noisy or disruptive child," and, "Those of us who were lucky enough to have competent parents didn't annoy the heck out of too many other people." See? If your kid cries while the guy in 23F is working on his PowerPoint presentation, it is so your fault.

Does society lack for lousy parents and bratty kids? I don't see us running out of either any time soon. So it's surely a good thing that, within that lightning rod CNN story, there were plenty of wise reminders that parents traveling with kids should err on the side of preparation and attention to their offspring and courtesy to their fellow passengers. It doesn't, however, change the fact that kids are loose cannons who often, just for the hell of it, make noise and poop in their pants.

If the wailing baby in front of you is bumming you out, that's understandable. If you think "you should buy a muzzle for your kid" or that the parents need to "remind me to get a seat next to you during every flight you take from now on so I can scream in your ear the entire way," you may want to consider the possiblity that you have an overdeveloped sense of entitlement. And that's the real great illumination of the CNN story -- something many of us already know all too well. Sure, flying sucks and the planet is full of rude, clueless people, but if you really want to see some outrageously childish stuff, just go straight to the comments section on any story about how other people ought to behave.