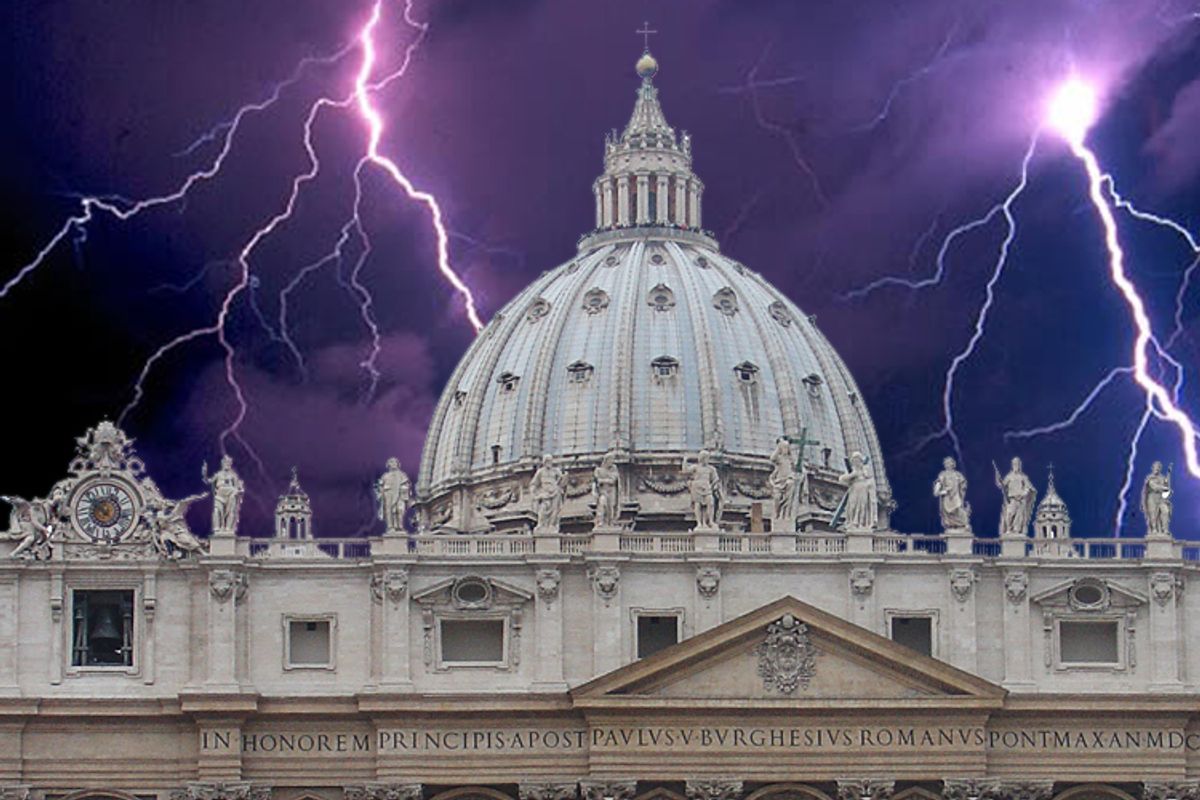 When you're one of the most powerful institutions in the world and you've got an escalating series of sex abuse scandals erupting in such far-flung locales as Ireland,  Germany, Brazil and beyond on a near daily basis, how do you even begin to do damage control? If you're the Catholic Church, maybe you say you're going to investigate. You issue a few letters. And then just to cover all your bases, you do a little Satan blaming. In a bold and arguably wack move, the Vatican's normally press-shy exorcist Don Gabriele Amorth has been granting interviews left and right lately, and they are a treasure trove of WTF moments.

You say you hadn't been aware the Vatican even had an official exorcist? Thought that stuff was just for Linda Blair movies? That's likely because, prior to last week, the Vatican had permitted its exorcist to grant one interview in the entire last century. Now, suddenly he's doing the rounds like he's got a new rom-com with Gerard Butler opening Friday.

Speaking to La Republica last week, Amorth, who in fact does have a new book, "Memoirs of an Exorcist," to shill, said, "When one speaks of 'the smoke of Satan' in the holy rooms, it is all true – including these latest stories of violence and pedophilia." A few days later, he told the UK Times, "All evil is due to the intervention of the Devil, including pedophilia." He also added that contemporary culture has "given in to the Evil One. You see it in the lack of faith, the empty churches, the collapse of the family. Compare the world of today to when I was a boy in Modena: families and parish communities were strong, women did not go out to work."

I don't want to read too much into it here, but did the honorary president of the International Association of Exorcists actually just sort of suggest that if some priest in Rio is sodomizing his altar boys, it might be my fault because I have a job? Cripes, you eat one lousy piece of fruit from the tree of knowledge and you get blamed for everything.

But he didn't stop there. Amorth then took his world publicity tour to the big time – granting an on camera interview Tuesday on CNN, he helpfully explained that pedophiles are "not possessed by the devil, they're tempted by the devil. They don't need exorcism; they need to be converted to God. They need to confess, they need true penance, true repentance."

I'm someone who self-identifies as a Catholic, who believes we shouldn't judge Christianity by its most evil elements any more than we would do likewise for any political, social or educational system we hold dear. My Catholic upbringing taught me kindness, forgiveness and non-materialism. I believe I can be outraged by the crimes of individuals – and their perpetuation by an institution looking out for its own best interests – and still find worth in a spiritual philosophy that would never tolerate that BS for one minute. All of which is my way of saying – I'm no Church basher, and I'm quite confident Don Gabriele Amorth is NUTS.

At least Amorth didn't completely insult the planet by suggesting that pedophila can be waved away with a little holy water and some incantations, any more than it can by transferring the offender to another parish. You likewise won't find too many people who'd disagree that confession and repentance are long, long overdue here. But that's just for starters. Until the Vatican gets it through its thick skull that sexual abuse isn't a sin but a crime, isn't a moral weakness but a dangerous pathology, it's going to continue putting up with predators within its ranks, thinking they can say they're sorry and make it all go away. It will go on holding the devil responsible for its own worst acts. And it will continue condemning its youngest and most vulnerable members to hell on earth.