Dennis Kucinich gets to "yes"

The liberal from Ohio says he still doesn't like the healthcare bill much, but he won't be the one to stop it 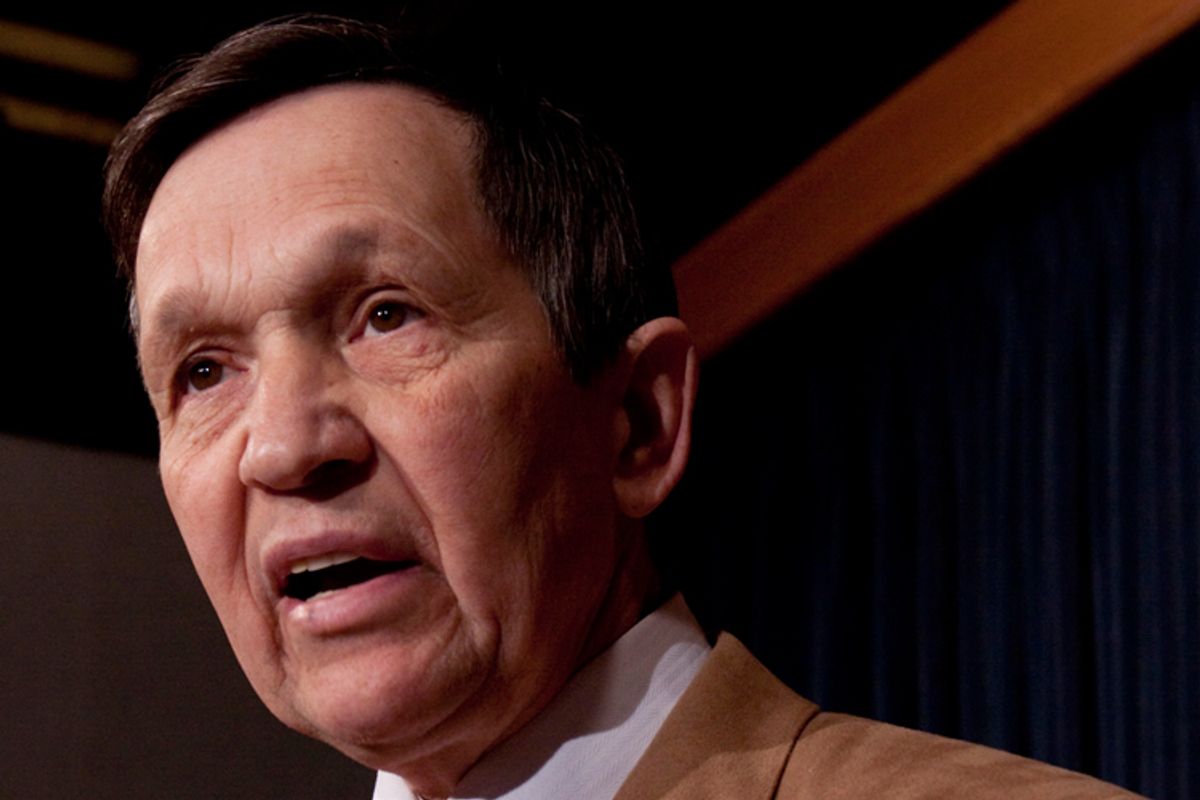 Rep. Dennis Kucinich, D-Ohio, speaks during a news conference in Washington on Wednesday, where he announced he will support President Obama's health care overhaul bill.
--

The hidden story behind Rep. Dennis Kucinich's decision to vote for the healthcare reform bill this week in the House isn't a very complicated one. It doesn't mean the White House has cut a secret deal to establish a Department of Peace; it doesn't mean Kucinich has given up on his (often lonely) pursuit of single-payer healthcare.

What Kucinich's announcement Wednesday morning really means is this: Democrats really are working with almost no margin of error on this one. If there were votes to spare, they could have cut him loose. But there aren't. If the bill is going to pass the House, leadership needs everyone they can get.

"It's been clear that the vote on the final healthcare bill will be very close," Kucinich, D-Ohio, told reporters. "I know I have to make a decision not on the bill as I would like to see it, but as it is ... I've decided to cast a vote in favor of the legislation."

Kucinich had been the lone progressive holding out against the bill from the left. He opposed it because it didn't have a public option, because it promised billions of dollars for private insurance companies, because it lacked significant measures to move the country toward better overall health and nutrition. That won him scorn from the likes of the Daily Kos, and a threat of a primary challenge in the 2012 elections. But it also got him plenty of attention from the White House. He met with President Obama four times, including on an Air Force One flight to Cleveland this week, to discuss the bill. He told reporters that when he left the White House after the meeting before this one, he had no thought that he might ever flip from a "no" to a "yes" vote. "My criticism of the legislation has been well-reported," he said. "I do not retract those criticisms, I incorporate them into this statement."

That's likely to be how other Democrats wind up coming down by the time the votes are held this weekend. Kucinich won't bring anyone else along with him, though; the only other Democrat who voted against the bill in the House last fall because it didn't go far enough was Eric Massa, and, well, he's not voting this time around.

Still, while some progressives may cast Kucinich's move as a sellout, it was hard not to give him some credit for looking at the reality of the mess Congress finds itself in. The conservative Democrats that make the difference between the party being in the majority and the minority, in both chambers, weren't going to go along with much more than the bill as it's been written. Kucinich said he pushed as hard and as far as he could for his priorities, but realized, eventually, that he wasn't going to win. And he also realized that he couldn't let Obama's opponents win.

"People are looking for something," he said. "They're looking for some hope that maybe something can be changed ... One of the things that has bothered me is the attempt to try to delegitimize his presidency. That hurts the nation when that happens. He was elected."

And that, basically, was that. Kucinich stood patiently, eagerly answering questions for 25 minutes, until his staff told him he had to leave the press conference; it was more attention than he'd gotten from the mainstream media during his presidential campaign. Even as reporters dredged up quotes from Kucinich bashing the bill, or asked him what kind of special deal he'd gotten the White House to agree to, he never blinked.

"There was no Nebraska- or Louisiana-type deal," he said. "This wasn't about the kind of deal-making that is essentially self-defeating towards the goal and that undermines public confidence in the bill." If only Ben Nelson had thought that way last December, the bill might have been passed by now.