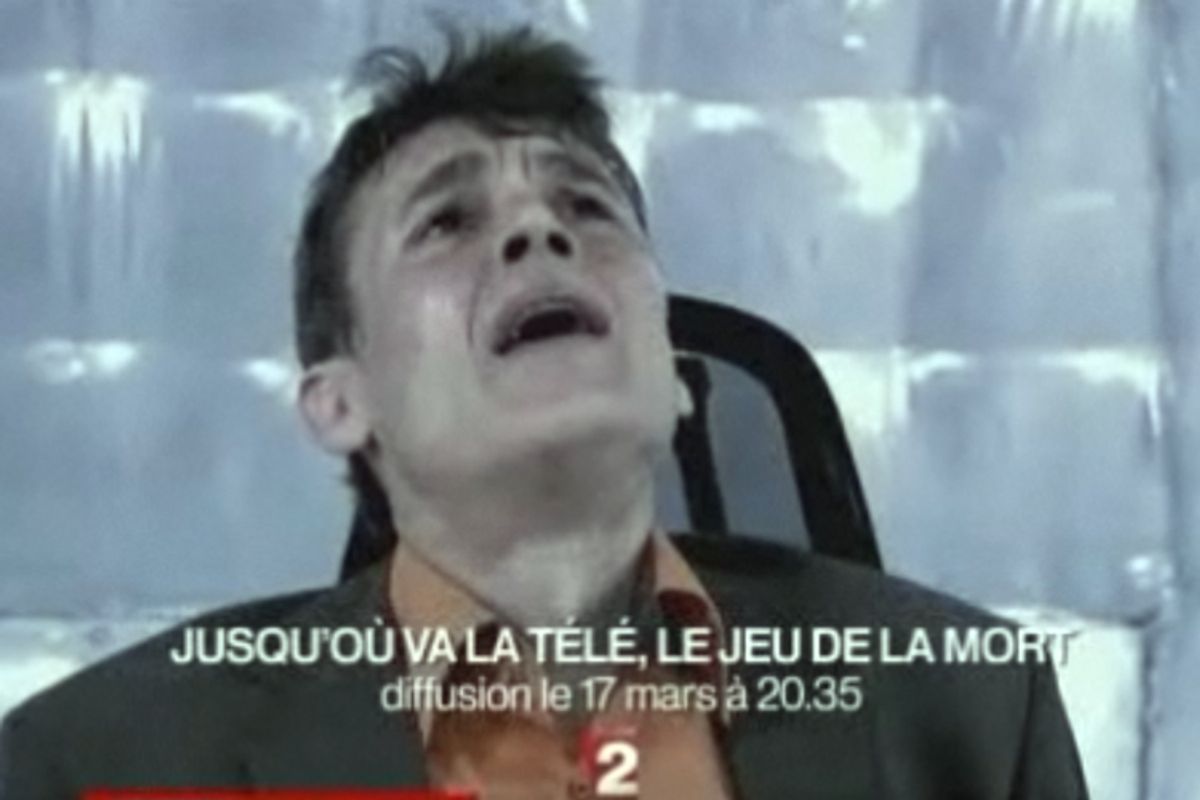 French documentarians conducted an experiment where they created a faux game show -- with all the typical studio trappings -- and then instructed participants (who believed it was a real TV program) to administer electric shock to unseen contestants each time they answered questions incorrectly, with increasing potency for each wrong answer.  Even as the unseen contestants (who were actors) screamed in agony and pleaded for mercy -- and even once they went silent and were presumably dead -- 81% of the participants continued to obey the instructions of the authority-figure/host and kept administering higher and higher levels of electric shock.  The experiment was a replica of the one conducted in 1961 by Yale psychologist Stanley Milgram, where 65% of participants obeyed instructions from a designated authority figure to administer electric shock to unseen individuals, and never stopped obeying even as they heard excruciating screams and then silence.  This new French experiment was designed to measure the added power of television to place people into submission to authority and induce them to administer torture.

None of this should be at all surprising to anyone who has observed, first, the American political and media class, and then large swaths of the American citizenry, enthusiastically embrace what was once the absolute taboo against torture, all because Government officials decreed that it was necessary to Stop the Terrorists.  But I just watched an amazing discussion of this French experiment on Fox News.  The Fox anchors -- Bill Hemmer and Martha MacCallum -- were shocked and outraged that these French people could be induced by the power of television to embrace torture.

Speaking as employees of the corporation that produced the highly influential, torture-glorifying 24, and on the channel that has churned out years worth of pro-torture "news" advocacy, the anchors were particularly astonished that television could play such a powerful role in influencing people's views and getting them to acquiesce to such heinous acts.  Ultimately, they speculated that perhaps it was something unique about the character and psychology of the French that made them so susceptible to external influences and so willing to submit to amoral authority, just like many of them submitted to and even supported the Nazis, they explained.  I kept waiting for them to make the connection to America's torture policies and Fox's support for it -- if only to explain to their own game show participants at home Fox News viewers why that was totally different -- but it really seemed the connection just never occurred to them.  They just prattled away -- shocked, horrified and blissfully un-self-aware -- about the evils of torture and mindless submission to authority and the role television plays in all of that.

Meanwhile, the bill recently introduced by Joe Lieberman and John McCain -- the so-called "Enemy Belligerent Interrogation, Detention and Prosecution Act" -- now has 9 co-sponsors, including the newly elected Scott Brown.  It's probably the single most extremist, tyrannical and dangerous bill introduced in the Senate in the last several decades, far beyond the horrific, habeas-abolishing Military Commissions Act.  It literally empowers the President to imprison anyone he wants in his sole discretion by simply decreeing them a Terrorist suspect -- including American citizens arrested on U.S. soil.  The bill requires that all such individuals be placed in military custody, and explicitly says that they "may be detained without criminal charges and without trial for the duration of hostilities against the United States or its coalition partners," which everyone expects to last decades, at least.  It's basically a bill designed to formally authorize what the Bush administration did to American citizen Jose Padilla -- arrest him on U.S. soil and imprison him for years in military custody with no charges.

This bill has produced barely a ripple of controversy, its two main sponsors will continue to be treated as Serious Centrists and feted on Sunday shows, and it's hard to imagine any real resistance to its passage.  Isn't it shocking how easily led and authoritarian the French are?

UPDATE:  Led by people like Rush Limbaugh, the American Right celebrated even the most extreme torture brutalities, such as those at Abu Ghraib, by embracing them as "a good time," an "emotional release," "blowing off steam," a "fraternity prank," and S&M pornography.  At least the contestants in the French show acquiesced to torture reluctantly and even with resistance, rather than with the demented pleasure, vicarious sensations of power, 24-type entertainment, and primal arousal which many disturbed individuals on the American Right derive from it.  And, as always, no discussion of the American torture and detention regime is complete without noting that the vast majority subjected to its horrors was completely innocent.

As for the McCain/Lieberman atrocity, it's been reported that the Obama White House (a) is actively negotiating with Lindsey Graham on a bill to provide for indefinite detention power and (b) has already designated numerous detainees to be held indefinitely with no charges of any kind.  It remains to be seen what their (and, then, their supporters') position on this bill will be.