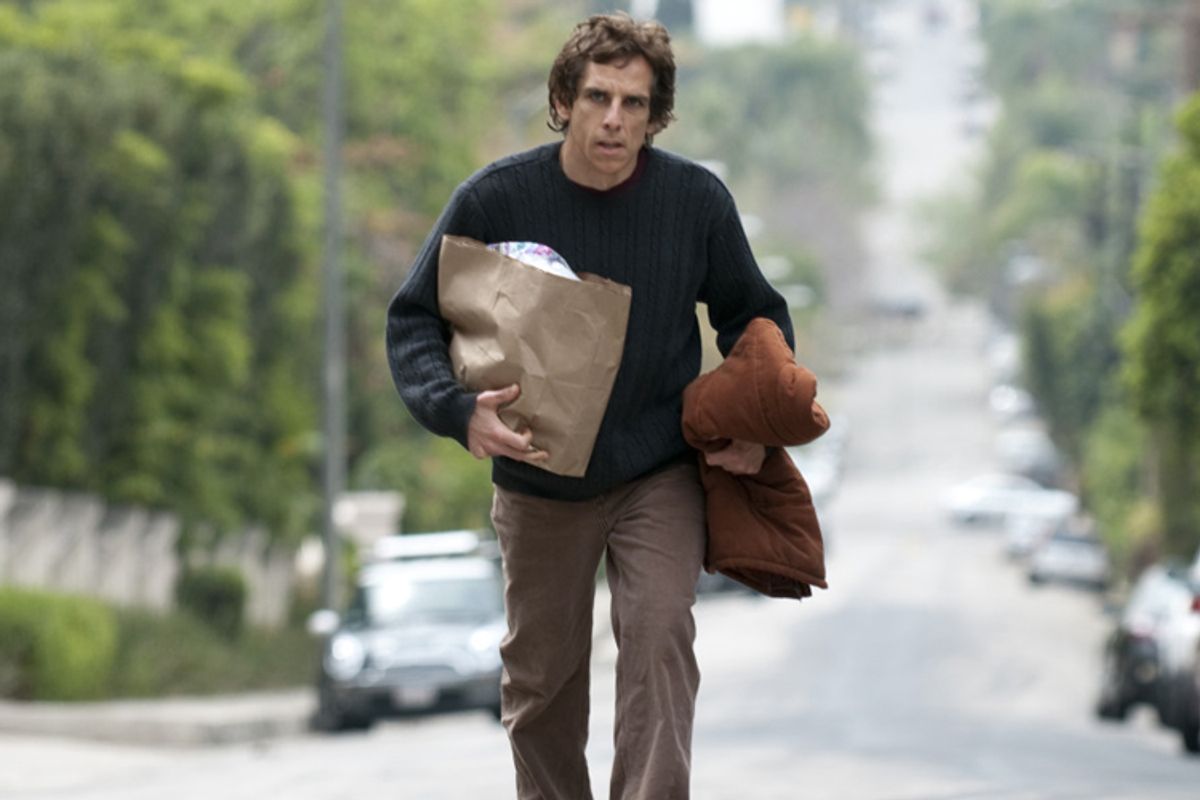 In Noah Baumbach's "Greenberg," Ben Stiller is the Roger Greenberg of the title, a fortyish lost soul who's just done a stint in a New York mental hospital and who has just decamped to his brother's tony digs in L.A., for a few weeks house- and dog-sitting. Greenberg is a gaunt ghost of a figure, with shadowy eye sockets and exhausted, unblinking eyes -- his pupils are constantly on red alert. He spends his days building a doghouse for his brother's family dog, a low-key German Shepherd named Mahler, and trying to reconnect with old friends that he's clearly alienated with years' worth of erratic behavior. He writes cantankerous letters to American Airlines, Starbucks and the New York Times, first etching them out in longhand (like a crazy person) and then typing them neatly before packing them off in their crisp envelopes (like a crazy person who knows how to appear sane). Socially awkward and so self-involved that other people's lives seem like an inconvenience to him, Roger Greenberg is everything most of us don't want to be.

Yet as Stiller plays him he's both repellent and compelling, a wayward, untethered soul who's nonetheless so close to the shore that our impulse is to reach out and pull him in, not push him further away. That unsettling tension between wanting to flee and wanting to help -- or at least comprehend -- is the very center of "Greenberg," Baumbach's fifth movie and, possibly, his most open-hearted and raw. Baumbach kicked off his career with the clever, modern-feeling comedies of manners "Kicking and Screaming" and "Mr. Jealousy"; his next picture, the semi-autobiographical "The Squid and the Whale" was more self-conscious and a little too preening, with its "Don't worry too much about us suffering middle-class intellectuals, we'll be OK" undertones, although it was easy enough to feel some sympathy for the movie's younger characters, kids caught in the current of their parents' bitterness. But the 2007 "Margot at the Wedding" gave us no one to feel sorry for and too many people to revile: Baumbach's portrait of a family of sad, confused little creatures suffering away in their costly-but-comfy coastal New England summer home hit a new low of cluelessness.

In a rough sense, "Greenberg" is of a piece with those two movies: Baumbach is fascinated by the cruelty that's inflicted by people who are suffering themselves. And he's sensitive to people in pain. As much as I disliked "Margot at the Wedding," I can't forget the scene in which Nicole Kidman's character makes cruel, thoughtless comments about her preadolescent son's changing body, and then waves away the damage she's done by saying, "It's OK, though."

The difference, maybe, is that Roger Greenberg as he's written and played isn't a specimen or an experiment -- he has the everyman believability of a person you might have known once, or probably did know. And his story is framed less by the confines of his own neurosis than by his tentative but growing connection to another character, Florence Marr (Greta Gerwig, who's previously appeared in mumblecore features like "LOL" and "Hannah Takes the Stairs"), the young woman who works as Roger's brother's assistant. Her boss -- he's played by Chris Messina -- and his family are on vacation in Viet Nam. Florence is in charge of looking after the house and the dog, although Roger assures her he can manage all that by himself. And essentially, he can. But for one reason or another, he keeps calling Florence. She's at first puzzled by him, and then intrigued. Then she decides she might actually like him, even though he initially paws at her with a sexual fervor that stems less from hunger than from some internal sense of duty. When Florence, over the phone, tells her best friend about the episode, we can hear the woman's amused assessment ringing out like the punchline to a bad joke: "A mental patient just went down on you!"

Florence is almost as physically awkward as Roger is emotionally: She has a tall, beautiful figure, but she doesn't seem to know what kinds of clothes to hang on it. (In one scene, she lounges at home in a pair of tights and a stretchy, too-small top, breezily unselfconscious about how odd this getup looks.) And she comes off, at first, as one of those spacy young women who float through life with seeming innocence, when in reality they're extremely canny about searching out the kinds of guys who will go overboard to take care of them.

Florence may be a little spacy, but she's not manipulative; she's sensitive, but not necessarily fragile. As Gerwig plays her, in this marvelously unstudied and touching performance, her gaze is both drifty and direct. At times she appears to be a woman who can barely take care of herself. When she goes home with a guy she's just met at a party, she stammers, "I just got out of a long relationship," to which he replies, with a voice that carries more than a hint of a smirk, "This isn't a relationship."

Florence gives in to the loser, partly because she simply wants to; still, an air of self-determination hangs about her shoulders like a mantle. Her powers of self-preservation are wrapped up in her essential kindness. She won't be a doormat, but there's something in Roger Greenberg that she refuses to turn away from. As she says to her best friend, again over the phone, "You can tell that a lot of normal stuff is really hard for him," and that about covers it.

Baumbach wrote the screenplay for "Greenberg," adapting it from a story he wrote with Jennifer Jason Leigh (his partner in real life), and the characters seem carefully calibrated to just drive us crazy enough. When I wrote briefly about the picture last month, from the Berlin Film Festival, I said that at first I couldn't decide whether the characters were driving me nuts or if they were affecting me deeply. That was on the first viewing; the second time, Roger and Florence drove me even crazier and affected me more. Roger may be odd, but more often than not, he's onto something. In the old days, he used to be a member of a semi-successful band; it was he who nixed the group's record deal, and the other members still resent him for it, although one of his former bandmates, Ivan (played, wonderfully, by Rhys Ifans), works valiantly to keep his and Roger's friendship alive. At one point Ivan drags Roger to a party where he's wholly out of place. A native Los Angeleno who's spent years in New York, Roger has no idea where he belongs, and he dresses the part: One of his favorite outfits is a puffer vest and sweater, a getup that's as out of place in the toaster-oven light of Los Angeles as he is.

But as Roger surveys the party, a collection of listless semi-grownups draped on couches having meaningless conversations and little kids running around in devil suits, he observes out loud, "All the men out here dress like children and the children dress like superheroes."

And he's not wrong. Later, as he presents Florence with a mix-CD he's made for her (it includes music by Karen Dalton, a '60s folk singer who was a favorite of Bob Dylan's but who suffered through homelessness and drug addiction before her death in 1993), she looks at him and says plainly, "You like old things." This isn't an accusation but an appraisal, a way of coming to grips with who he is. "Greenberg" is an unsettling but ultimately joyous little picture, a movie that's as self-conscious as anything Baumbach has ever made, and yet far more open: It reaches out to the world instead of insisting on hugging its own pain, tight. There are points in "Greenberg" where Roger treats Florence with inexcusable cruelty; he's cruel to her, in fact, right after he proffers that heartfelt mix-CD. But slowly, gradually, he's getting the hang of not hurting people. "Greenberg" is all about that halting, forward movement. Maybe there's no happy ending for Roger Greenberg, but there's no going back, either, and that counts as progress.