The return of the MSG boogeyman 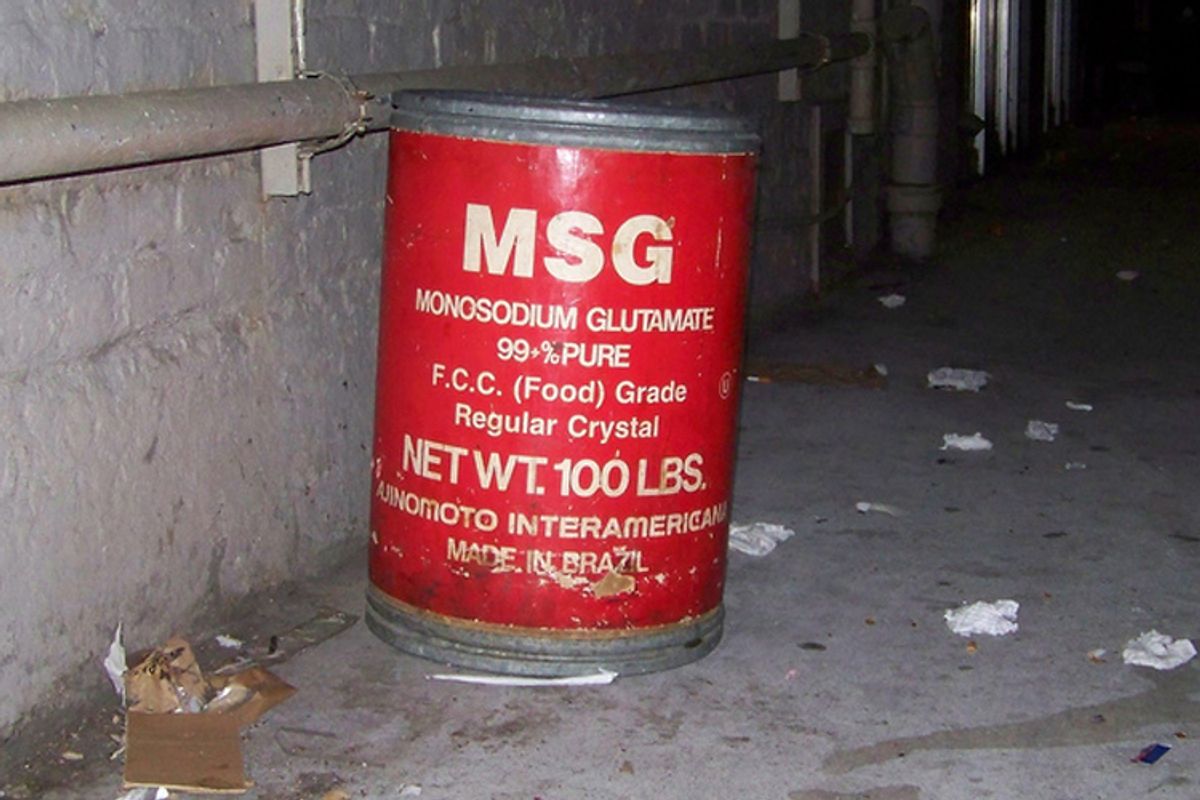 Monosodium glutamate, the food additive better known as MSG, hasn't exactly been on many people's radar screens over the past few years. During the 1980s, MSG (which is used to enhance umami flavors in food, and most frequently associated with Chinese food) was believed to cause stomach problems, headaches and even brain lesions, but in the years since those early MSG scares, studies haven't been able to find any basis for those anecdotal claims, and it has largely, and justifiably, disappeared as a health concern.

That hasn't stopped the Huffington Post from bringing back the MSG boogeyman this week. Yesterday, the site, which has a long tradition of spurious medical advice, featured a story on the front of its "Living" section by a Dr. Joseph Mercola titled "MSG: Is This Silent Killer Lurking in Your Kitchen Cabinets?" Yes, MSG is apparently back, and trying to kill you (in your kitchen!).

The piece, which today ranked as the fifth most-read article on the site, claims that MSG is "one of the worst food additives on the market," it "could be slowly and silently doing major damage to your health," and, most dramatically, that MSG is "far worse for your health than alcohol, nicotine, and many drugs." Mercola then cites the research of a Dr. Russell Blaylock, who claims that MSG is responsible for, among other ailments, brain damage, learning disabilities, Alzheimer's, Parkinson's, Lou Gehrig's disease, and cardiac arrhythmia. Claims that are utterly terrifying and very bogus.

Who is Joseph Mercola? He's a doctor of osteopathic medicine (not an M.D.), entrepreneur and anti-vaccine advocate. He operates a Web site called Mercola.com that is largely dedicated to selling natural health products. And where is he getting his information from? In one case, a video on his own Web site, dubious sites like the Price Pottenger Nutrition Foundation ("a non-profit educational resource providing access to modern scientific validation of ancestral wisdom"), a dead link to an FDA site (the FDA has approved MSG for consumption) and, of course, Blaylock.

Blaylock is a retired neurosurgeon and the author of a book called "Excitotoxins: The Taste that Kills," published by the little-known Health Press. But he's also an anti-vaccine activist who sells a "Brain Repair Formula" (promising to "maximize your brain's ability to heal") on his personal Web site.

While the food additive HVP has been making headlines over the past few weeks, the only MSG-related study to make the mainstream news in recent years is a possible connection between the food additive and obesity. No recent widely accepted medical study has drawn a connection between MSG and life-threatening ailments. As a 2005 Guardian article pointed out, "every concerned public body that ever investigated [MSG] has given it a clean bill of health, including the EU, the United Nations food agencies (which in 1988 put MSG on the list of 'safest food additives'), and the British, Japanese and Australian governments."

We asked Rahul K. Parikh, M.D., about Mercola's claim that MSG is more dangerous than nicotine and alcohol. His response: "That's the worst thing I've ever heard."  Marion Nestle, Paulette Goddard Professor of Nutrition, Food Studies and Public Health at New York University, says the threat of MSG has been disproved "over and over and over again." "The MSG thing came out in the early 1980s," she says, "because something called Chinese Restaurant Syndrome was written up in a prestigious medical journal -- then there were lots of studies looking at it, and the better controlled the studies were, the less they showed this existed."

Nestle attributes the persistence of MSG myths to fear-mongering, and our irrational approach to danger. "People perceive risks that are chemical or foreign and out of their control as being scarier than risks that are more familiar and apparently under their control," she says. "This means people are much more scared of MSG, food additives, G.M. foods and radiation than something like bacteria in the food supply -- which causes 75 million cases of food illness a year and 5,000 deaths."