"Up-or-down votes" and the GOP 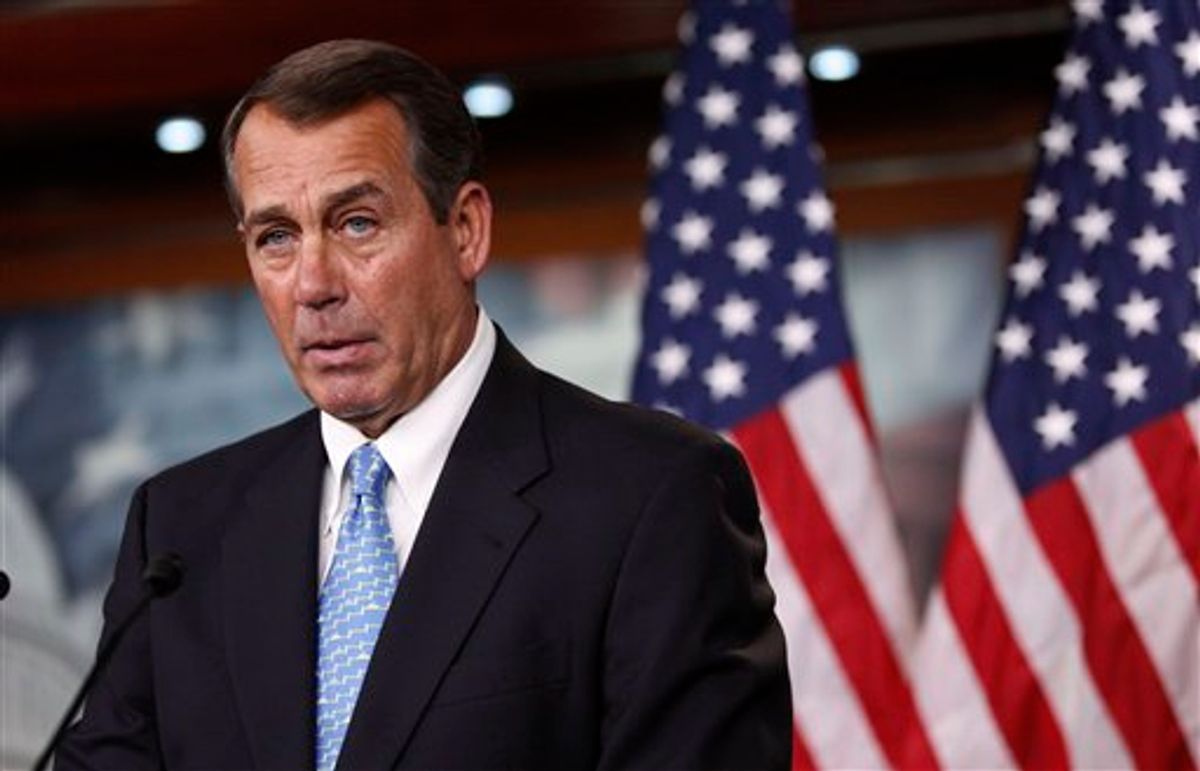 Give House and Senate Republicans credit for one thing, at least -- at this point in the debate, there's no way the Democrats could have pulled off a bicameral meeting on healthcare reform without several members needing some healthcare themselves afterwards.

The GOP, though, seems to have emerged from a joint session with lawmakers from each chamber Thursday morning unscathed and uninjured. Republicans banded together to display unity and pledge to keep fighting the bill all weekend long. "We're going to continue to work closely together to do everything we can do to make sure that this bill never, ever, ever passes," House Minority Leader John Boehner, R-Ohio, told reporters after the meeting.

The Republican love-in, though, had a bit of a jarring subtext: On the House side of the Capitol, the GOP is busy demanding a straight up-or-down vote on the healthcare bill. On the Senate side, the GOP has done everything in its power to block an up-or-down vote. In a battle over which parliamentary device is more or less beloved, Republicans have come down very clearly on the side of the filibuster, and against "deem and pass." The GOP loves an up-or-down vote, except when they don't.

"Well, there are legitimate parliamentary devices and there are illegitimate parliamentary devices," Sen. Jeff Sessions, R-Ala., told Salon after the meeting. "This one's illegitimate, it seems to me." The ranking Republican on the Senate Judiciary Committee, Sessions said he's got his lawyers looking at whether the House maneuver is constitutional, and whether the GOP should sue to block it.

What makes the "deem and pass" tactic (also known as a "self-executing rule") necessary in the House, of course, is that Republicans won't let Democrats bring a revised version of the legislation back to the Senate. Which means the House can't amend the bill the Senate has already passed; if they did, Republicans would use procedural devices of their own to prevent it from coming to a vote. So the House is trying to wrap their approval of the Senate bill together with a budget reconciliation measure designed to fix it.

That's not to say Democrats have a sterling track record when it comes to grandstanding over process, either; they used the filibuster in the Senate when they were in the minority, and protested the "deem and pass" technique in the House when Republicans were in control there, too. Still, Democratic aides haven't been shy about pointing out the "epic levels" of "hypocrisy and inconsistency" that Republicans have reached during the debate this week.

After all, what's the main reason for all the GOP outrage? Republicans don't really have a very good way of stopping the bill if the House approves it. "Our plan is for it not to come to the Senate," GOP Senate leader Mitch McConnell, R-Ky., said. "Our plan is for it to be defeated here in the House in the next few days." So if that means latching on to one parliamentary argument in one chamber and another one in the other, that's just what they'll do.