It's time for Wall Street to pay

We need accountability -- as in, jail time where warranted -- for those who created the financial disaster 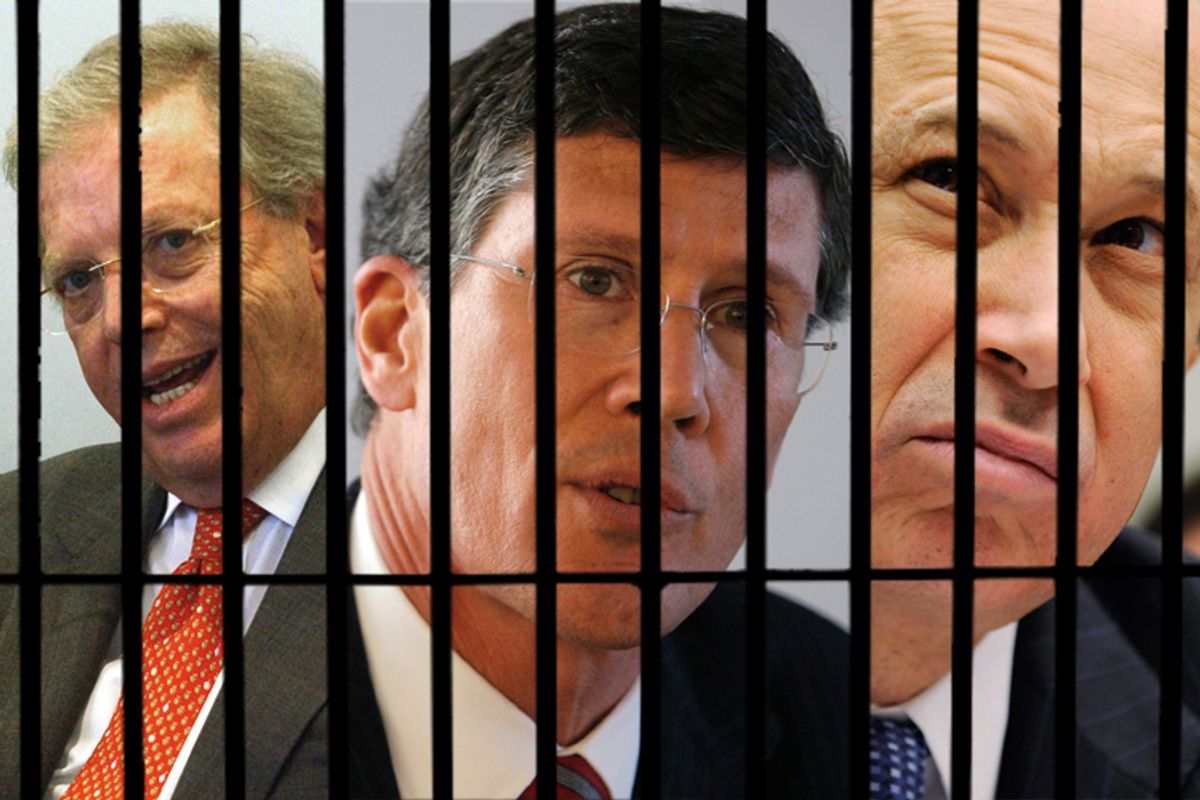 Almost everybody's got their noses out of joint these days -- and no wonder. If there's a significant American institution that hasn't failed in its fundamental public responsibility over the past decade, it'd be hard to identify.

Writing in Time, Christopher Hayes puts it succinctly: "Nearly every pillar institution in American society -- whether it's General Motors, Congress, Wall Street, Major League Baseball, the Catholic Church or the mainstream media -- has revealed itself to be corrupt, incompetent or both. And at the root of these failures are the people who run these institutions, the bright and industrious minds who occupy the commanding heights of our meritocratic order."

Me, I blame the combination of runaway baseball salaries, the "talented and gifted" movement in schools, and the tyranny of SAT scores. I'm only half-joking. Once free agency drove even an average third baseman's pay into the seven-figure range formerly reserved for tycoons who owned major industries or medium-size Midwestern states, practically everybody with SAT scores over 1,400 figured they deserved to earn as much as Aramis Ramirez.

The differences being that quality third basemen are a lot rarer than Ivy League MBAs, and are publicly and relentlessly evaluated. Steroids or no steroids, one bad season and they're replaced by a 22-year-old from the Dominican Republic. That's one of the things keeping us fans hanging on.

Not so in the corporate world. As recently as 2008, the geniuses running Wall Street investment banks bankrupted their companies and came perilously close to collapsing the world financial system. And what happened? A few CEOs departed via "golden parachute," but most executives stayed shamelessly in place, profited from multibillion-dollar TARP bailouts and then began awarding each other obscene bonuses almost before the smoke cleared.

Meanwhile, a substantial part of a generation's retirement savings vanished into thin air. Had the Bush administration succeeded in "privatizing" Social Security back in 2005, the damage could not have been worse.

Over time, American institutions appear to be growing steadily less accountable. Hayes cites the Catholic Church's sex abuse scandal, which strikes me as a red herring. Yes, the bishops averted their eyes, placing the putative well-being of the church above children. Yes, ecclesiastical lectures on sexual sin are a bit harder to take. But the church has been hierarchical, secretive and self-protective since forever. Moreover, as recent developments in Ireland and Germany show, the problem is international.

More to the point, "look at CEO pay," Hayes urges. "In 1978, according to the Economic Policy Institute, the ratio of average CEO pay to average wage was about 35 to 1. By 2007 it was 275 to 1." In comparison, the ratio remains approximately 20 to 1 in most European countries; roughly 11 to 1 in Japan. Yet people complain about labor unions.

Hayes cites Nell Minow, an expert in corporate governance nicknamed "The CEO Killer" by Fortune magazine, to the effect that all many executives know how to do is "manipulate the levers of governance and devise ingenious methods of guaranteeing themselves windfalls regardless of their company's performance." The unvarying defense of the latest Wall Street bonuses, of course, is that the talented and gifted recipients might otherwise change teams. Why, perish the thought.

Only recently, reporters have begun catching up with the bankruptcy examiner's report on the failure of Lehman Brothers investment bank, the precipitating event in the 2008 financial crisis. According to law professor and former white-collar prosecutor Peter J. Henning, writing in the New York Times' DealBook blog, the 2,000-page document "discusses some accounting gimmicks that are eerily reminiscent of how Enron tried to prop up its balance sheet back in 2001 before it collapsed."

And for which, it will be recalled, a number of Enron executives went to prison. The details can be dauntingly complex. But what they amounted to were a series of short-term accounting tricks designed to make the bank's financial health appear robust as it "teetered on the brink of ruin."

The basic gimmick was called a "Repo 105," moving bad real estate-based assets off the books by using them as collateral for short-term loans just long enough to file quarterly reports, then unwinding the deals as quickly as overnight.

It's as if your brother-in-law assumed your debts and deeded you his assets overnight so you could qualify for a bank loan, then took them back. Except Lehman was doing it to the tune of $50 billion a pop. You and your brother-in-law would go to prison for that, and so should somebody at Lehman Brothers. Hopefully, somebody with a brilliant academic record and impeccable social credentials, so the rest of them start paying attention.