"The Bounty Hunter" chains its stars to the bed

Forget crackling chemistry. Jennifer Aniston and Gerard Butler seem to be tolerating each other at best 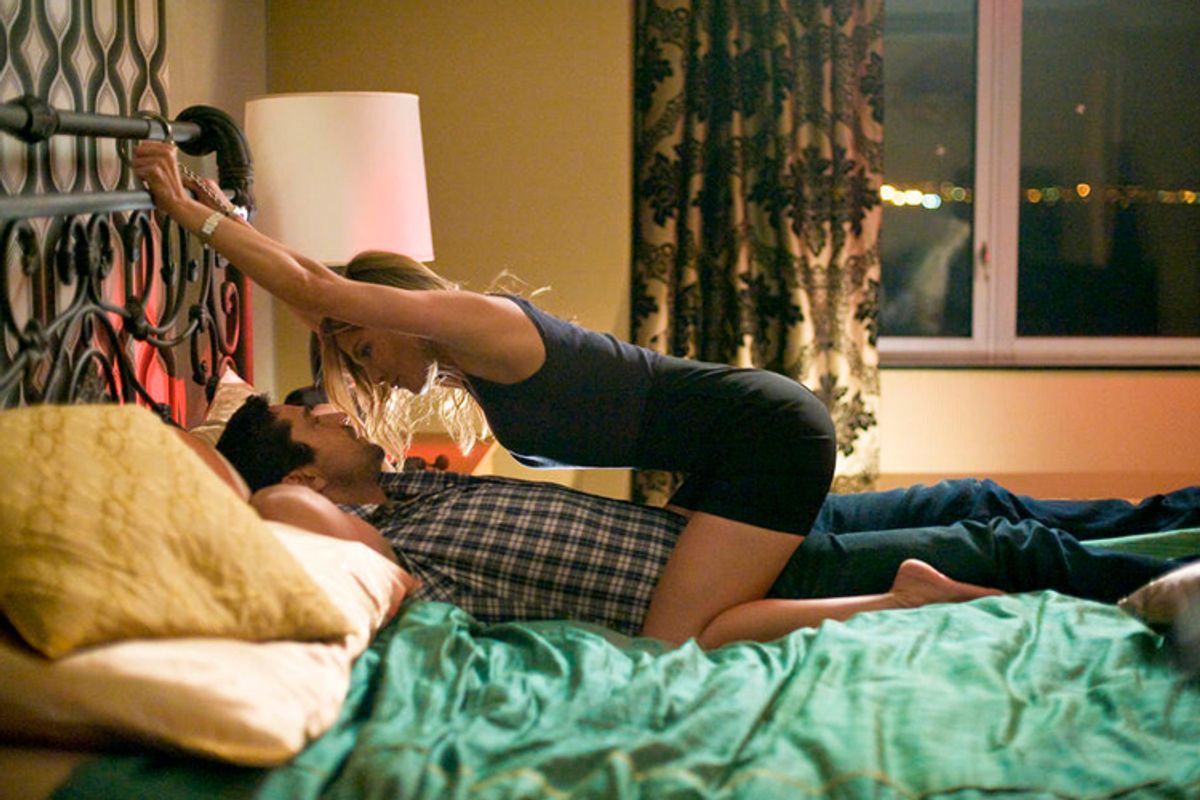 Gerard Butler and Jennifer Aniston in "The Bounty Hunter."
--

"The Bounty Hunter" has brought me no closer to knowing whether I find Jennifer Aniston mildly appealing or mostly unbearable. By now I've at least learned that she's an actress who can't be easily written off. She's given surprisingly multi-shaded performances in pictures like David Frankel's unapologetically emotional "Marley & Me," but she's also been deeply underwhelming -- just too cute by half -- in movies like "The Break-up."  I've adopted a "show me" policy when it comes to Aniston's movies: I'm open to the possibility of surprise, but I know I'm more likely to get a passable level of inoffensive mediocrity.

And so with "The Bounty Hunter," the Jennifer Aniston mystery deepens -- well, just a little. Aniston plays New York reporter Nicole Hurley, who works for a paper called the Daily News. (You know this movie is pure fiction when you see that the office she works in is actually populated, with busy, productive newspeople who still have jobs.) Nicole is hot on the trail of a big story involving a suicide that may actually be a murder. But she's also facing a felony charge, and she further complicates the situation by missing her court date. The bounty hunter assigned to haul this lawbreaking cutie-pie into jail is none other than her own ex-husband, Milo Boyd (Gerard Butler), a former detective who now shuffles around in a half-shaven state, working hard to be charming in an "Aw, shucks -- who, me?" kind of way.

In their post-divorce state Milo and Nicole can't stand each other, and he really rubs her the wrong way when he chucks her into the trunk of his car. That's how the movie opens, and it's a vaguely promising beginning: You can see that the director and the screenwriter -- respectively, Andy Tennant and Sarah Thorp -- have tried to inject some verve and wit into this thing. The goal, clearly, was to give us an old-fashioned romantic caper-comedy with lots of crackle between the leads and one or two amusing second bananas or bit players. (My heart leaped with joy when the wonderful, diminutive comic actress Carole Kane showed up as a country innkeeper, though her role is barely a smudge.)

But even though Tennant has a few reasonably entertaining pictures to his credit -- among them the 1998 "Ever After," in which Drew Barrymore plays a completely charming Cinderella -- he fails to give "The Bounty Hunter" the energy it needs. The plot is overly tangled and knotty, and its resolution is dealt with in a hasty verbal explication. Those sins might be excusable, if there were at least some chemistry between the two leads. But Butler and Aniston appear to be tolerating each other at best. Their characters go through the motions of conning one another, but their hearts just aren't in it. On two separate occasions, one handcuffs the other to a bed -- whether that's supposed to be a fear-of-commitment metaphor or a feeble effort to add some kinkiness to the proceedings, the gag just feels tired and worn out.

Regardless, Aniston has her game face on. She may be uninspired in "The Bounty Hunter," but she's doing her damnedest to keep the picture's wobbly wheels spinning. I find myself once again unable to come up with anything particularly damning or complimentary to say about Aniston. This performance, like so many others she's given, at least has a perfunctory glow about it. She doesn't just sleepwalk her way through these half-baked roles, she actually works at them, and her gumption, at least, is admirable.

But what's Butler's excuse? I've been told that Butler is a sex symbol, the kind of guy who turns 99 percent of the female population into crazed chicks out of the old Hai Karate ads. But if he's throwing off any heat, it's failing to reach me. Butler's smile isn't cute or sexy; it's just kind of a doughy smirk. There's nothing smoldering behind his exaggerated swagger; at best, it speaks of "You know you want it!" entitlement. I concede that Butler generally looks artfully rumpled, if you like that sort of thing. Still, my ambivalence about Aniston notwithstanding, I think she deserves better. "The Bounty Hunter" is a comedy of remarriage that makes divorce look like a state of grace.