Siding with a foreign country over their own, attacking U.S. generals, advocating policies that endanger our troops 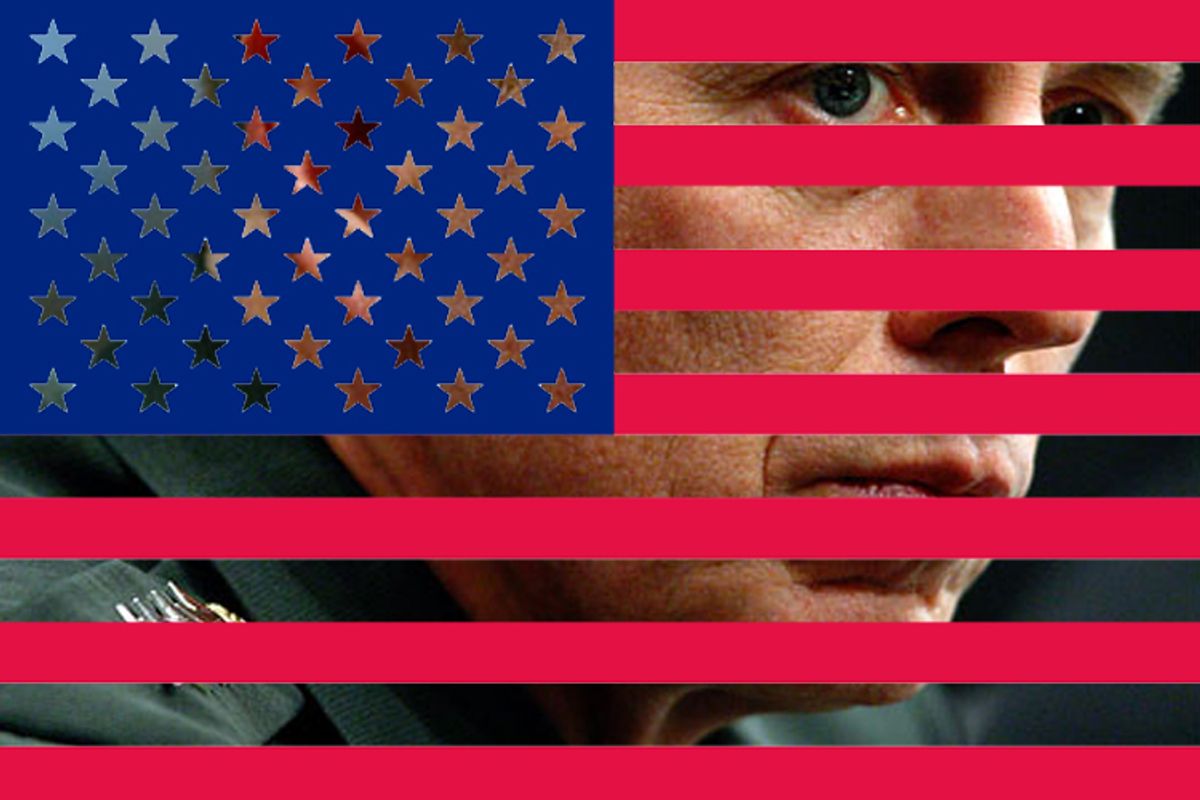 During the Bush years, the Bush-following Right's Glenn "Instapundit" Reynolds, a law professor at the University of Tennessee, frequently accused opponents of the Iraq War of being "unpatriotic," endangering the Troops, and committing treason:  "They're not so much 'antiwar' as just on the other side," he often wrote.  Today, the same Glenn Reynolds wrote (emphasis added):

If I were the Israelis, not only would I bomb Iran, but I'd do so in such a way as to create as much trouble for China, Russia, Europe and the United States as possible.

Calling on a foreign country to act in a way that creates "as much trouble as possible" for your own country seems to be the very definition of being "on the other side," does it not? (and his cover sentence -- "Are the Israelis less obnoxious than me? I guess we’ll find out soon enough . . . ." -- changes nothing).  That's especially true since the action Reynolds is endorsing -- Israel's bombing of Iran -- likely would, according to America's top military official, directly result in the deaths of American soldiers:

Chairman of the Joint Chiefs of Staff Adm. Michael Mullen, warned last Thursday that an Israeli attack on Iran might lead to escalation, undermine the region's stability and endanger the lives of Americans in the Persian Gulf "who are under the threat envelope right now."

By Reynolds' own standards, blithely endorsing such outcomes would seem, definitively, to place one "on the other side."  But over the last week, as the U.S./Israel dispute has blossomed, the American Right generally has engaged in much conduct that they have always denounced as disloyal and treasonous.  Almost unanimously, they have adopted what Jeanne Kirkpatrick famously condemned as a "Blame America First" attitude, with super-patriots such as National Review and Charles Krauthammer, among many others, heaping all blame on America and siding with the foreign government.  According to these Arbiters of Patriotism, this dispute is The Fault of America; indeed, when it comes to American conflicts with Israel generally, as Kirkpatrick put it in her famous refrain:  "somehow, they always Blame America First."

Along those lines, the Anti-Defamation League's Abraham Foxman yesterday formally condemned Gen. David Petraeus for warning that Israel's conflict with the Palestinians increases anti-American hatred and endangers American troops due to a "perception of U.S. favoritism for Israel."  Foxman attacked Petraeus' remarks as "dangerous and counterproductive" -- and, indeed, they are:  "dangerous and counterproductive," that is, for those (like Foxman and the neocon Right) who want the U.S. to blindly support Israeli actions even when doing so directly harms American interests.  As Andrew Bacevich explained in Salon yesterday, the fact that Petraeus has now linked U.S. support for Israel to harm to U.S. interests will make it impossible for Israel-centric neocons to stigmatize that linkage ever again, and is thus "likely to discomfit those Americans committed to the proposition that the United States and Israel face the same threats and are bound together by identical interests."  Isn't it Barack Obama's overriding duty as Commander-in-Chief to listen to his military commanders and take aggressive action against anything which undermines America's war effort and Endangers the Troops -- including Israel's settlement expansions?

Beyond that, wasn't it only recently that attacking Gen. David Petraeus the way the ADL has done was deemed so unpatriotic that it merited formal, bipartisan Congressional condemnation?  As Joan Walsh proposed yesterday, shouldn't Congress now be preparing to condemn the ADL and Foxman for their attack on Petraeus, launched at him as he commands brave American men and women in harm's way, fighting for our country?  After all, Petraeus is responsible for the safety of those troops and is trying to alert government leaders about policies which endanger those troops and undermine the American war effort.  What kind of person would attack Gen. Petreaus for doing that, all in the name of serving the interests of a foreign government?  One hasn't seen attacks on Gen. Petraeus this vicious since he condemned torture and called for the closing of Guantanamo, thereby provoking the unhinged wrath of America's Right.

And then we have what I thought was the patriotic standard that one should not attack the President in his conduct of foreign policy during a time of war.  What happened to Joe Lieberman's solemn 2005 warning that "in matters of war we undermine presidential credibility at our nation’s peril"?  This is the same Joe Lieberman who, along with his conjoined twin, John McCain, this week went to the Senate floor to rail against President Obama for the crime of Excess Criticism of Israel.  Isn't Al Qaeda going to be emboldened if they see the Commander-in-Chief being weakened and attacked by these U.S. Senators as inept and our country riddled with internal divisions of this sort?  That was the argument made by these same right-wing super-patriots for years (and, indeed, is now being echoed -- not ironically but earnestly -- by their mirror images on the dissent-hating, Beltway version of the "Left," such as Newsweek's Jonathan Alter).  But for the neocon Right, that uber-patriotic standard seems to have been suspended as of January 20, 2009, and (like so many standards) is revoked altogether when it comes to Israel.

Whatever else is true, the American Right is now openly siding with a foreign government against their own, and bitterly Blaming America for these problems.  They're protecting this foreign government's actions even though our top Generals say those actions undermine our war effort and directly endanger American troops.  They're advocating policies -- such as the Israeli bombing of Iran -- which America's Joint Chiefs Chairman has gravely warned will seriously impede our wars and lead to the deaths of our soldiers.  They're demeaning the top American General with command responsibility for two theaters of war.  And, in a Time of War, they're attacking the President of the United States, the Commander-in-Chief -- and relentlessly depicting him as weak and inept -- all because he's prioritizing American interests over those of a foreign country.  All of that seems to severely breach the standards of Patriotism they have long advocated and which have long prevailed, to put that rather mildly.

Perhaps most notably, all of this is taking place as a new poll of Israelis finds that "a sweeping majority of Israelis think [Obama's] treatment of [their] country is friendly and fair"; "most Israelis don't believe politicians who call Obama anti-Semitic or hostile to Israel"; and "more [Israelis] said Netanyahu's behavior [in this conflict] was irresponsible than said he acted responsibly."  Put another way, the American neocon Right is demanding a level of American loyalty to Israel far higher than Israelis themselves expect, and (as usual) the American neocon Right is far more blindly supportive of the Israeli Government than Israelis themselves are.