A serial philanderer tells why guys stray in Esquire, but he offers no insight into infidelity, far less men 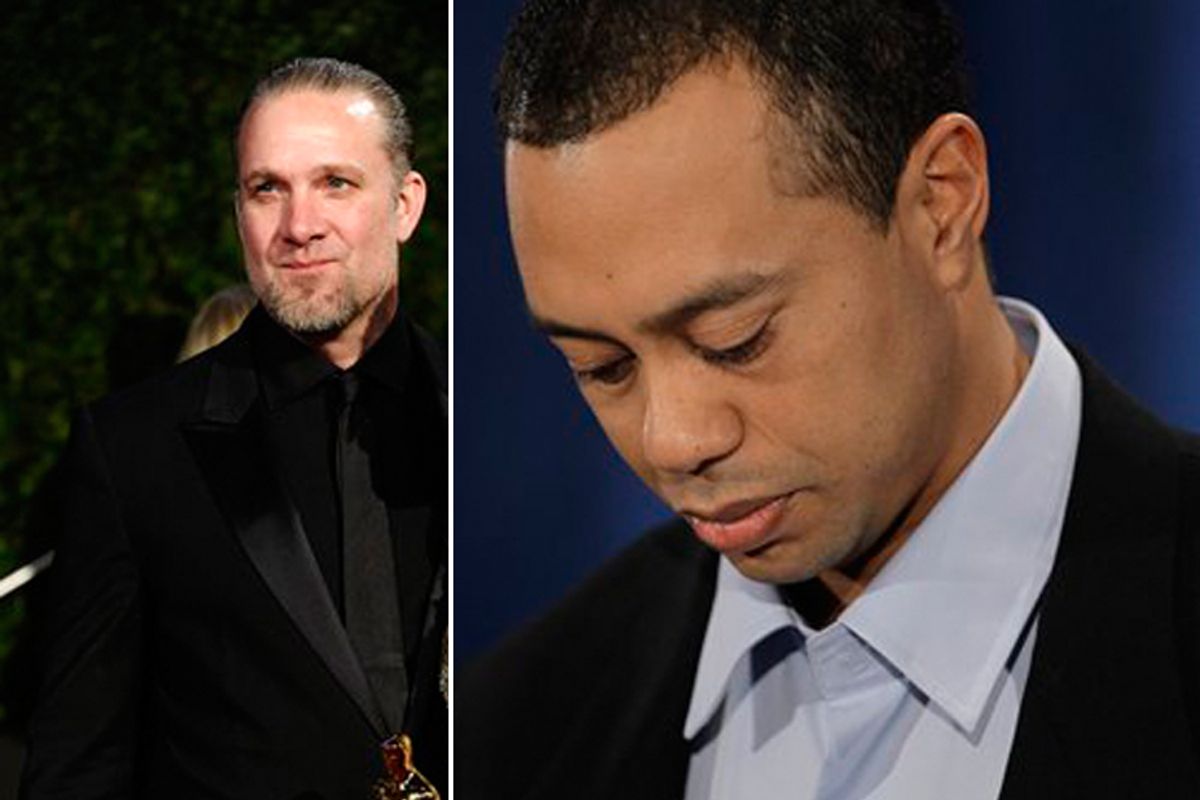 Jesse James is cheating on Sandra, Tiger wants to choke out his stripper while he bangs her in the ass, and Sam Mendes needs more than one female sex icon to satisfy his needs. A troika of high-profile, anything but ordinary celebrities turn out to be cheaters and (surprise, surprise) maladjusted egomaniacs, and suddenly the men's fidelity sky is falling, worse than it was after Edwards, and Sanford, and Spitzer. Enter Esquire, which -- in an effort to validate the concerns of those who think celebrities really are just like us -- posted a helpful article titled "Why Men Cheat" by anonymous.

For the record, I don't cheat, not that my proclamation means anything. I could be cheating as I write this for all you know.

But I don't judge cheaters. I think there are understandable reasons for cheating: love of sex, the desire to feel young, the illusion of new love (Marc Sanford, I'm looking in your direction), and let's not forget fear of death. All this stuff is acceptable in my book. I recognize some of these reasons may be short-sighted and may ultimately end up causing everyone involved big hurt, but they are, at the very least, hopeful. Maybe you are with the wrong person and will find someone who makes you happier. They are concerns with which I can sympathize. Who doesn't want to feel younger or more attractive sometimes?

The Esquire piece offers none of these qualities. This guy is just angry.

The post opens with the fact that the writer's 401K and his "performance review" are weighing heavily on his mind, but he can forget about them when he's mid-coitus with a woman, other than his wife, at the Hampton Inn. Because if there is one place where you don't have to worry about a review of your performance, it's at the Hampton Inn.

I imagine the author clenching his fist and whispering it softly to himself after he finished typing.

He then goes on to rip into guys who say they love their wives:

"Getting married rotates the average guy away from everything he has known about himself up to that point. And some guys pass the test. They do. And I love listening to their shit. Consider the 'I love my wife' routine, which certain moralistic nimrods unspool in front of me over cocktails again and again. I never jump in. I do not bite. You don't fight men over stuff like this. I love my wife, too, but it's nobody's business how I deal with that love. And most of the time, this comes from guys who pop into strip clubs on the way home, jerk off to YouPorn in their offices, or prowl Craigslist looking for a goose in their transgression quota. I don't do any of that. My local life is clean. I am more focused than they are. Stronger and better suited to what is near me -- my family, my wife, my job. In some ways, that's because I don't hesitate to cheat."

But the other weird part about this is that he says, "you don't fight men over stuff like this" -- yet he goes and does just that. He fights with men (with me) about it, he just does so in flaccid anonymity. And though he's written this fine piece anonymously, he has, in fact, invited everyone to make his love for his wife their business. He's just as chatty as the rest of us losers. And to be clear, from an outside perspective, I don't think he is better suited for his family than the guys he tars -- because I bet his family is trusting him not to bang the cashier from Burger King at the Hampton Inn.

But his scorn for monogamous unclean masturbators continues:

"Those are the guys who never cheat, even if they wish they could. I wish they would shut up about it. Save your stories about how you made sweet love to your wife before you left for the flight to Europe. Don't be a house-proud dipshit. Don't moralize. My happiness and my misery are my own -- don't gift wrap some part of yours to compensate. Yes, I know, there are plenty of men who pass that test of fidelity. For them there is no other way."

First of all, I would never, never describe making love to my wife as "sweet." There is actually a lot of grunting, if you must know. And if by "left for the flight to Europe" he means "catch the bus to Trenton," well, I'm already way ahead of him. But my point is, why does this guy care? It ain't a competition brother; ain't no need to drag the rest of us into it.

Also, "My happiness and my misery are my own -- don't gift wrap some part of yours to compensate"? This doesn't make you sound deep. It makes you sound like Angela Chase from "My So-Called Life."

Our fair narrator then goes on to explain that he's not taking revenge on his wife, and then he blesses us with all he's learned about the wonders of women and why he loves them so much blah blah blah. I'll spare you the details; let's just say it's pretty self-important and dumb.

So aside from the self-aggrandizing and totally obnoxious tone of the piece, what's the problemo? What happened to "I don't judge cheaters"?

This is not a cheating piece. This guy isn't just a dick; he actually gives decent cheaters a bad name. This guy is not describing why he cheats; he's describing why he (and, admittedly, many like him) love to lie. There is a difference. The sex is incidental in this post, it's an after-thought. What he's really getting off on, what's really making him feel "like the blood is moving in him again," is the fact that "This is the most absolute choice I can make. I am there on my own. Against every code, rule, and set of mores I pretend to obey. Against better judgment, against every lesson of hindsight and every shard of wisdom that comes with age." He sounds like a more articulate version of my kid after he ate the dog's food (all of it).

This is not a cheating piece, this is a control piece, and apparently, he doesn't feel like he has much; it's a theme that's repeated in this tired chestnut that he busts out toward the end:

"[Cheating] is the by-product of longer life spans, more-deadening careers, too much work. And it is the consequence of an instinctive refusal to give up one's own need entirely for the flawed and antiquated apparatus of marriage."

This is not a cheating piece, this is a revenge piece; society isn't nice with all its fancy expectations for little Prince Anonymous, so I will treat my wife passive aggressively -- no, make that cruelly -- and I'll do so in complete anonymity (just like this article). I will use my wife and these women to get back at the big bad modern world that doesn't appreciate me. Performance reviews, training, 401K, too much work, deadening career, flawed and antiquated apparatus of marriage.