A Stupak deal? Chaos on the floor. Pence denounces tea party racism. Plus: Plouffe vs. Rove, hot and nasty 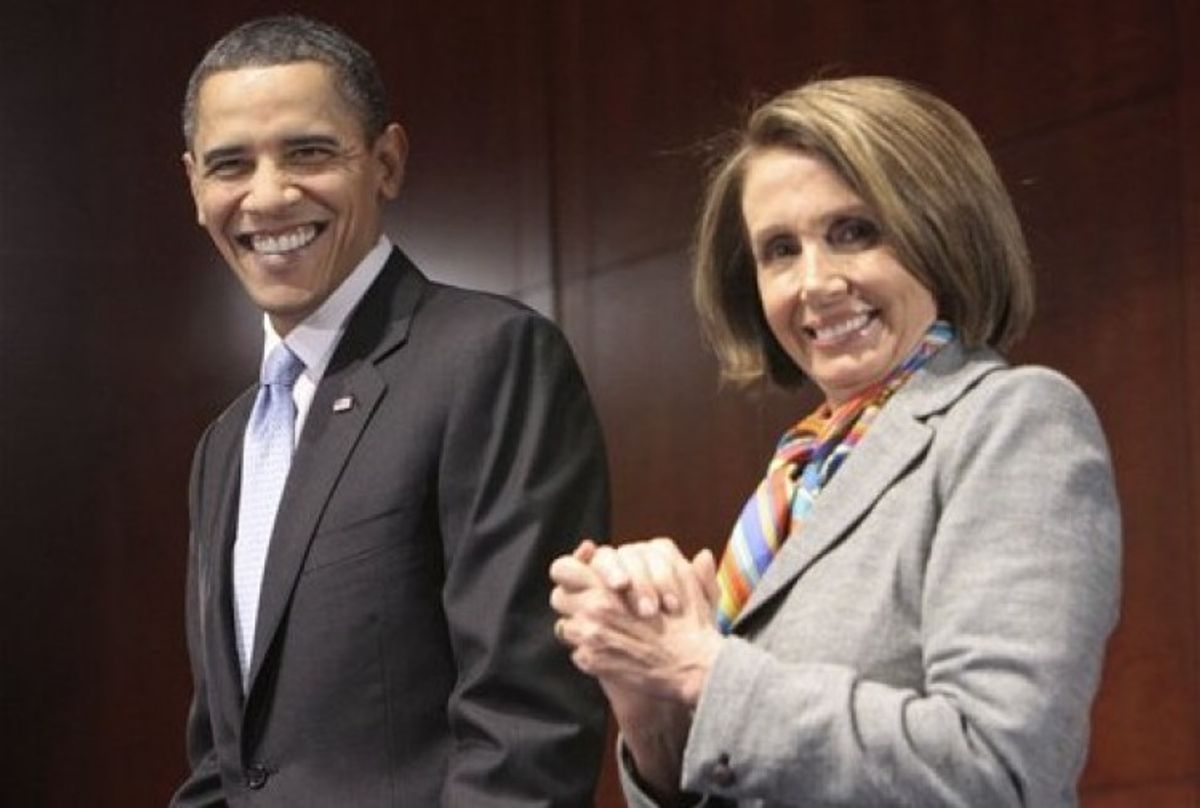 The moment Democrats have been waiting for is finally here: The House plans to vote on the healthcare reform bill later Sunday evening. Lawmakers will arrive in the afternoon to begin debate on a rule governing the rest of the day's procedures. Later, they'll vote on the Senate's healthcare bill, and then a budget reconciliation measure designed to fix that version. Look here for updates throughout the day.

3:34 p.m. Eastern: On the House floor, Rep. David Dreier, R-Calif., is trying to stir up some trouble. The GOP keeps baiting Democrats, insisting that the Senate won't actually pass the budget reconciliation package of amendments after the House votes on the Senate's bill. So Dreier asked Rep. Louise Slaughter, D-N.Y., how Democrats know the Senate will follow suit.

Before long, Slaughter and Dreier were shouting at each other, and both were gaveled down.

3:12 p.m. Eastern: Rep. Brian Baird, D-Wash., who voted against the healthcare reform bill last fall but isn't seeking reelection, now says he'll vote for the bill Sunday. "On balance, I believe this legislation will be much better than what exists today," he said in a statement issued by his office. " I believe it represents a number of improvements in both content and process over the legislation as passed by the House, and, it is the best we are likely to be able to accomplish at the present time."

Baird, a psychologist who taught health policy before arriving in Congress, told Salon recently he still wasn't sold on the bill. He doesn't think the current healthcare system is sustainable for very long; he says the complex web of federal agencies and programs that affect delivery of care needs to be replaced. But he also said expanding access was crucial. And in the end, he may have realized that going from "no" to "yes" was easier for someone who isn't trying to hold onto his job than for some colleagues who will face voters in November.

2:42 p.m. Eastern: Republican lawmakers are trying their best to show the tea party activists outside the Capitol that they're on their side. Rep. Mike Pence, R-Ind., the third-ranking GOP leader, just strolled outside and shook hands with the crowd (now gathered behind police barriers to keep them away from House members), smiling and thanking them.

Pence stopped to talk to a few reporters. Asked about the racist and homophobic shouts from the crowd at Democrats Saturday, he was pretty blunt. "I crossed the bridge in Selma with [civil rights leader and Democratic Rep.] John Lewis a couple weeks ago," Pence said. "I denounce, in the strongest possible terms, the kind of language and statements that have been reported." But he said the GOP wasn't responsible for inciting the anti-government movement to the frenzy that it's reached. "I think we've reached a tipping point here," he said. "I think the American people are rising up with one voice and saying, 'Enough is enough.'"

Other Republicans were doing their best to rev up the crowd outside, which has grown to more than a thousand people throughout the afternoon. Rep. Geoff Davis, R-Ky., joined a small group of Republicans who borrowed a "Don't Tread on Me" flag from a tea partier, then took it up to a balcony on the second floor of the Capitol, just off the House floor, and waved it for protesters to see.

Take a look here (I snapped a picture with my phone): Afterward, Davis came down and returned the flag. "This is a demonstration of the people of our republic expressing, frankly, their fear of their own government, at the attempt to take over a system that belongs to the private citizens," he told me and the Washington Post's Perry Bacon. "I wish we had a million people here instead of the ones that we've got." (Davis, of course, is the charming fellow who referred to President Obama during the 2008 campaign as "that boy," then had to issue an apologetic press release.)

The GOP is walking a fine line here. On the one hand, Republicans don't want to be held accountable for the people who called John Lewis "nigger." On the other hand, they're perfectly happy to encourage the anti-government impulses that have led people to camp out outside the Capitol all weekend. If Republicans do wind up taking over a majority in Congress, it's not entirely clear how they'll keep that anti-government fervor in check.

2:04 p.m. Eastern: Despite rumors that Rep. Bart Stupak, D-Mich., had agreed to support the healthcare bill if the White House issues an executive order on abortion, an aide says he hasn't signed off on anything yet. "There is not yet a deal and he is still a no vote right now," spokeswoman Michelle Begnoche told Salon.

1:59 p.m. Eastern: Capitol Police just removed a protester from the public gallery in the House chamber, after he began shouting about the healthcare reform bill. There's a large crowd of tea party protesters gathered outside, as well; you can hear them chanting, "Kill the bill! Kill the bill!" and "Nancy, Nancy" (a sing-songy taunt aimed at Speaker Nancy Pelosi) from inside the building.

Police formed a cordon to protect Democratic lawmakers as they walked in from a caucus meeting in a House office building earlier. For the second day in a row, some of the protesters yelled, "Faggot," at Rep. Barney Frank, D-Mass., as he walked in (according to Anna Edney, a reporter for Congress Daily, who saw the incident).

1:38 p.m. Eastern: In a rather intense encounter with David Plouffe on ABC's "This Week," Karl Rove said that the Obama healthcare plan is based on "Bernie Madoff-style economics" and that it will bankrupt the country. Watch the entire segment below:

1:15 p.m. Eastern: The House just came back into session, and it's already clear that the day won't go smoothly. The GOP demanded a recorded vote approving the journal for Saturday; that's a bit of clerical work that usually happens with a voice vote, but forcing what the House calls "the yeas and nays" will slow the proceedings down.

Lawmakers are now doing one-minute speeches, which on this Sunday are mostly focused on, yes, healthcare reform. "We know the consequences of this bill will be frightening and horrible," Rep. Marsha Blackburn, R-Tenn., said to kick the one-minutes off, setting the likely tone for the rest of the day. Shortly afterward, Rep. Sheila Jackson Lee, D-Texas, reminded her colleagues of the racist, homophobic taunts hurled at some of them Saturday. On her way into the Capitol Sunday, she said, someone had asked her "why my braids were so tight." But she said it was time to move past all that and do the right thing, and pass the legislation.

12 p.m. Eastern: There's still a little suspense in the air over how it's all going to shake out, but not much. "We've got the votes," Rep. John Larson, D-Conn., the chairman of the House Democratic conference, told CNN's "State of the Union." Democratic aides expect a final vote to come around 9 p.m., in part because Republicans will do whatever they can to delay the end. "We are going to use every means at our disposal to oppose this government takeover of healthcare," Rep. Mike Pence, R-Ind., the GOP conference chairman, told CNN.

Over the last few days, obstacles to passage that had seemed insurmountable started melting away. An antiabortion bloc led by Rep. Bart Stupak, D-Mich., splintered, and conservative lawmakers may be assuaged by an executive order from President Obama making it explicitly clear that the healthcare bill won't permit the use of federal funds for abortions. (Rep. Marcy Kaptur, D-Ohio, was one new "yes" vote Sunday.) Pro-choice lawmakers held fast and kept additional restrictions that Stupak was demanding out of the legislation. The National Council of La Raza, a leading Latino civil rights group, had come out in support of the bill the other day, and key Latino lawmakers said they'd vote for it despite restrictions on undocumented immigrants.

The bill will still wind up passing with only Democratic votes, and only by the slimmest margin. A White House official says Obama is preparing to call -- and take phone calls from -- House Democrats ahead of the vote, just in case. And the Senate must still pass the reconciliation package of amendments; that's a much tougher lift than in the House, because of rules that allow the GOP to try to pick off pieces of that bill -- or add mischievous amendments -- while it's on the floor. But if the House vote does go as Democrats say they're expecting, the Senate bill will head to Obama for signature into law.