"Dancing With the Stars" preview: Kate plus 10

Gosselin may be getting all the attention, but let's hope Buzz Aldrin and Pamela Anderson steal the show 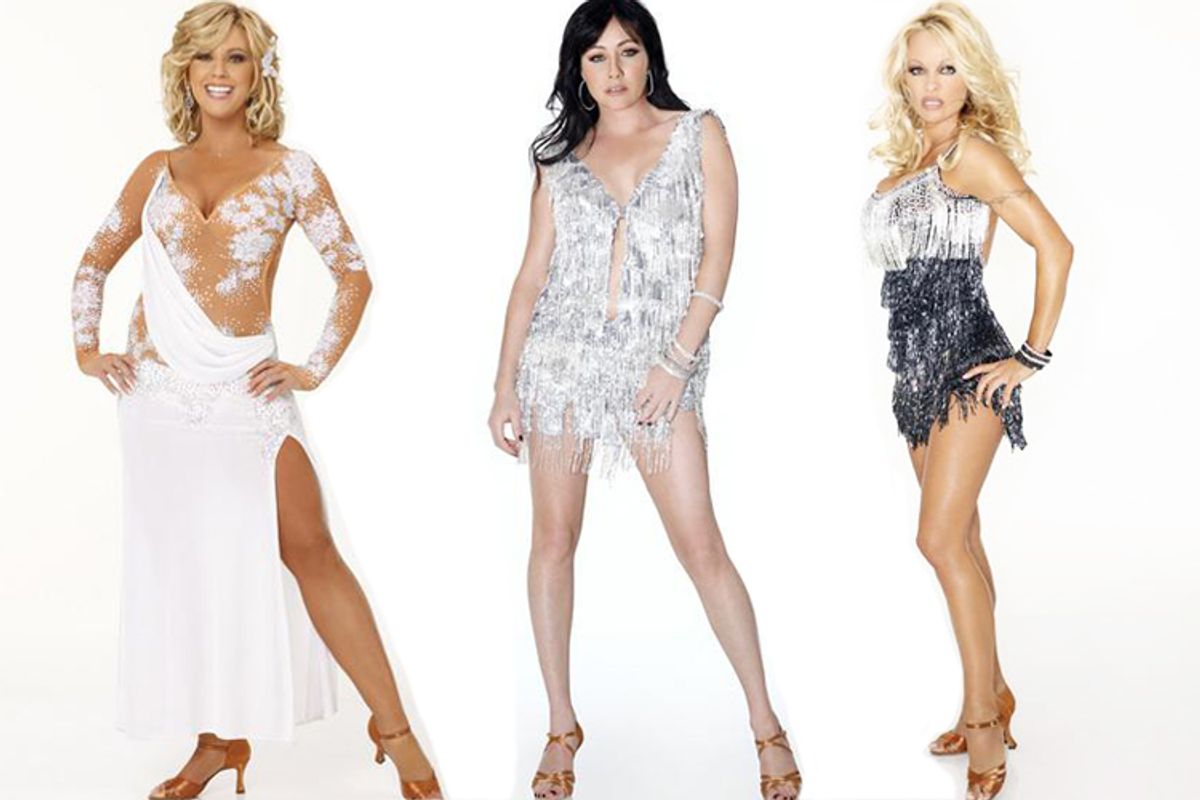 Kate Gosselin, Shannen Doherty and Pamela Anderson from "Dancing With the Stars."
--

My friend Kristina bought me a box of Always vaginal wipes last weekend as a party gift. To be fair, she didn't know they were designed to freshen the vagina until we pointed that out to her; she had been packing them in her kids' lunches every day as hand sanitizer. She used them as underarm wipes, appreciating their softness and mild scent as a substitute for harsh and potentially toxic deodorant. And since I had recently quit using deodorant myself, we had bonded over the constant struggle to battle that "not so fresh" feeling.

But here's why this is relevant.

"Dancing With the Stars" premieres on Monday night, and Kate Gosselin is a contestant -- as in, "Oh, that vaginal wipe Kate Gosselin is on the cover of People magazine again." All I know about Kate Gosselin is what I've seen on "The Soup," where Joel McHale regularly featured snippets of her miserable marriage and unruly brood from "Jon and Kate Plus 8," most commonly in couch confessions where she complained about her lazy-ass husband while he sat, looking as if a blunt-force trauma to the head might be a welcome relief. She is this season's Heather Mills, attempting to reform her diva image and silence her "bad mother" critics by donning ball gowns and spending every waking moment away from her eight young children. Good luck, sister. I think more airtime is only going to make things worse for you, but I will maintain an open mind. The new hair is, at least, a good start.

In keeping with the vaginal theme, let's talk about a couple of douche bags who are joining the cast: football player Chad Ocho Cinco and "Bachelor" Jake Pavelka. Chad's original last name is "Johnson," but he changed it to Ocho Cinco to mirror his jersey number, 85. And word is he's going to change it next season to "Hachi Go," which are the numbers 8 and 5 in Japanese. Far be it from me to question his motives. Who am I to say that the gesture isn't an homage to Latino and Japanese culture steeped in a burning intellectual curiosity and not a gimmick to feed his oversize sports-star ego? But c'mon -- is there anybody who doesn't think he didn't do a quick Google search to find matching numbers from the first two foreign languages he could think of? And is there anybody who wouldn't agree that this places him solidly in the realm of douche bag? But I will maintain an open mind about him as well, as I saw a few interviews in which he was vaguely likable, in the way that narcissists can be. The true test will be how he reacts when Bruno launches his first flaming gay come-on after a fiery salsa number. Any heterosexual sports star who resists the urge to grab his balls, pee on the stage and squeeze his dance partner's boobs to show just how straight he is will win a few points from me.

Oh, and I know all about Jake. He may be the nicest person to ever have graced the face of planet Earth, and he cries with sensitivity, and he's ridiculously good looking and a pilot and let's just wrap him up in an American flag and eat chunks of apple pie off his six-pack abs because he is just that grade-A Midwestern adorable. I get it. But douche-baggery is afoot, my friends, for anyone who agrees to take part in the "Bachelor"/"Bachelorette" franchise. Nobody gets through this theater of the absurd without a little vinegar in their Summer's Eve cleanser. Trust me on this.

And to round out our theme, I give you Pamela Anderson. I know that Pamela Anderson was a "Baywatch" babe, even though I never really saw the show. And I know she was married to that petri dish, Tommy Lee. And I know she did a cameo in "Borat" and made some other short-lived television shows along the way. But it's the sex tape that I found to be her most compelling work. And not the actual sex parts, mind you -- I mean, how many times can you see Tommy Lee thrusting his gargoyled penis into her shaved vajayjay before you just want to take a cold shower and run to church? No, the compelling parts were the tender scenes between the two of them when they were just hanging out on the boat while Tommy Lee was trying to fish like a 6-year-old, and she was sunbathing and cooing affectionately back at him like a patient mother. I had never liked her before, but I liked her then. Her hair, boobs and myriad other body parts may be fake, but there is something genuine about her that pilot Jake couldn't touch in a million years. I'm pulling for her.

And then there are the rest:

Nicole Shitzinbowzer, or whatever the hell her name is, from the Pussycat Dolls. (That will be my final vaginal reference.) I know nothing about her other than she's super hot and lithe like a cat.

Shannen Doherty, of the original "Beverly Hills 90210," who manages to come back every few years or so, like a herpes infection.

Erin Andrews, whom I've never heard of before, but apparently is a sideline sportscaster and survivor of a peeping Tom episode of some sort.

Aiden Turner, an "All My Children" actor hoping to dance his way out of obscurity and into eventual obscurity.

And my two sentimental favorites:

Buzz Aldrin, because he's 80 freakin' years old and has walked on the moon and should be home doing crossword puzzles and watching "Matlock" reruns but instead is shaking his groove thing on national TV, even though I'm sure he's not even going to be able to bend his knees and will be voted off within the first week or two. And because his name is "Buzz."

Niecy Nash, because I think "Reno 911" might be one of the most underappreciated television shows in recent years, and she is one of the funniest characters on it. And because she's got a bodacious booty that will vanquish those who dare defy it.

If there is any positive quality to this show, it's that it gives disgraced, forgotten or falling stars a chance to at least partially redeem themselves or fall flat on their faces trying.  It's a modern-day Roman gladiator competition where the stakes are high and the rewards fleeting at best. Drew Lachey, anyone? But for even the most unsavory of competitors, one cannot deny the incredible amount of work and balls it takes to tackle the intricate dance moves that professionals spend lifetimes perfecting. So, I watch with an open mind, a skeptical heart and a razor-sharp eye for douche-baggery in all its forms. It should be a fun ride.