One Republican leader after the next stood up yesterday to depict the health care bill as a grave threat to democracy because it was enacted in the face of disapproval from a majority of Americans.  Minority Leader John Boehner mourned:  "We have failed to listen to America.  And we have failed to reflect the will of our constituents.  And when we fail to reflect that will -- we fail ourselves and we fail our country."  GOP Rep. Mike Pence thundered:  "We're breaking with our finest traditions . . . . the consent of the governed."  That the health care bill destroys "the consent of the governed" because it is opposed by a majority of Americans has become the central theme of every talking-points-spouting, right-wing hack around.

Of course, these are the same exact people who spent years funding the Iraq War without end and without conditions even in the face of extreme public opposition, which consistently remained in the 60-65% range.  Indeed, the wholesale irrelevance of public opinion was a central tenet of GOP rule for eight years, as illustrated by this classic exchange between Dick Cheney and ABC News' Martha Radditz in May, 2008, regarding the administration's escalation of the war at exactly the same time that public demands for withdrawal were at their height:

RADDATZ: Two-third of Americans say it’s not worth fighting.

RADDATZ:  So?  You don’t care what the American people think?

CHENEY: No. I think you cannot be blown off course by the fluctuations in the public opinion polls.

For years, the explicit GOP view of public opinion was that it is irrelevant and does not matter in the slightest.  Indeed, the view of our political class generally is that public opinion plays a role in how our government functions only during elections, and after that, those who win are free to do whatever they want regardless of what "the people" want.  That's what George Bush meant in 2005 when he responded to a question about why nobody in his administration had been held accountable for the fraud that led to the Iraq War:  "We had an accountability moment, and that’s called the 2004 elections."  Watching these same Republicans now pretend that public opinion must be honored and that our democracy is imperiled when bills are passed without majority support is truly nauseating (of course, Democrats back then protested Cheney's dismissal of public opinion as a dangerous war on democracy yet now insist that public opinion shouldn't stop them from doing what they want).

But, for better or worse, our political and media class does not believe that.  That's why the GOP (with substantial Democratic help) funded the Iraq War indefinitely and without conditions even in the face of massive public opposition.  It's why the Wall Street bailout was approved by both parties despite large-scale public opposition, and why a whole slew of other policies favored by majorities are dismissed as Unserious by the political class.  The Washington Post's Shailagh Murray explicitly said that public opinion is and should be irrelevant to what political leaders do because people are too ignorant to have their views matter:  "Would you want a department store manager or orthodontist running the Pentagon? I don't think so."  The American political system is now based on the central premise that nothing is more irrelevant than public opinion, and nobody has embraced that premise more enthusiastically than the Republicans who ran the country for the eight years prior to Obama's presidency, including those now most gravely insisting that public opinion must be respected lest the Republic fall.

UPDATE: How do Republican leaders reconcile their claim that "consent of the governed" compels adherence to majority opinion with their vehement opposition to the public option and Medicare expansion, both of which command the support of large majorities of Americans?  Doesn't their opposition to those highly popular measures rather blatantly violate their new professed belief in the sanctity of public opinion?

On a different note, it will likely interest some people here that Noam Chomsky -- no blind partisan he -- said yesterday that if he were in Congress, he would "hold his nose" and vote for the health care bill because, as flawed as it is, it's an improvement over the status quo.

Finally, please note that I'm not making an argument about whether public opinion should or should not dictate outcomes; the point is about those who are wildly inconsistent in their advocacy on that issue.  If you really want to go to the comment section and address the question of how much public opinion should matter, feel free, but please don't labor under the impression that it has anything to do with what I've written here.

UPDATE II:   A new CNN poll today finds that Americans oppose the current health care plan by a margin of 59-39%, but a sizable portion of those opposed -- 13% -- oppose it because "it is not liberal enough" (see questions 20 and 21):

Thus, a majority of Americans either support the plan or believe it should be more liberal (52%), while only a minority (43%) oppose the plan on the ground that it is too liberal.

UPDATE III: For a particularly striking example of how the Right, in the form of National Review, was once so dismissive of "public opinion" when it suited them -- i.e., when they wanted to defend Jim Crow laws even in the face of majority opposition -- see here: 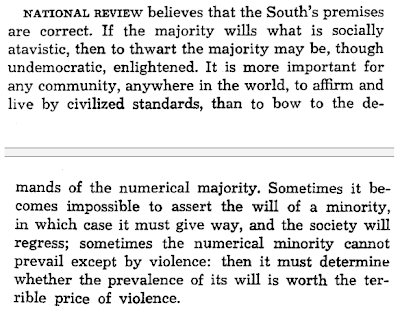