"On the side of the angels" 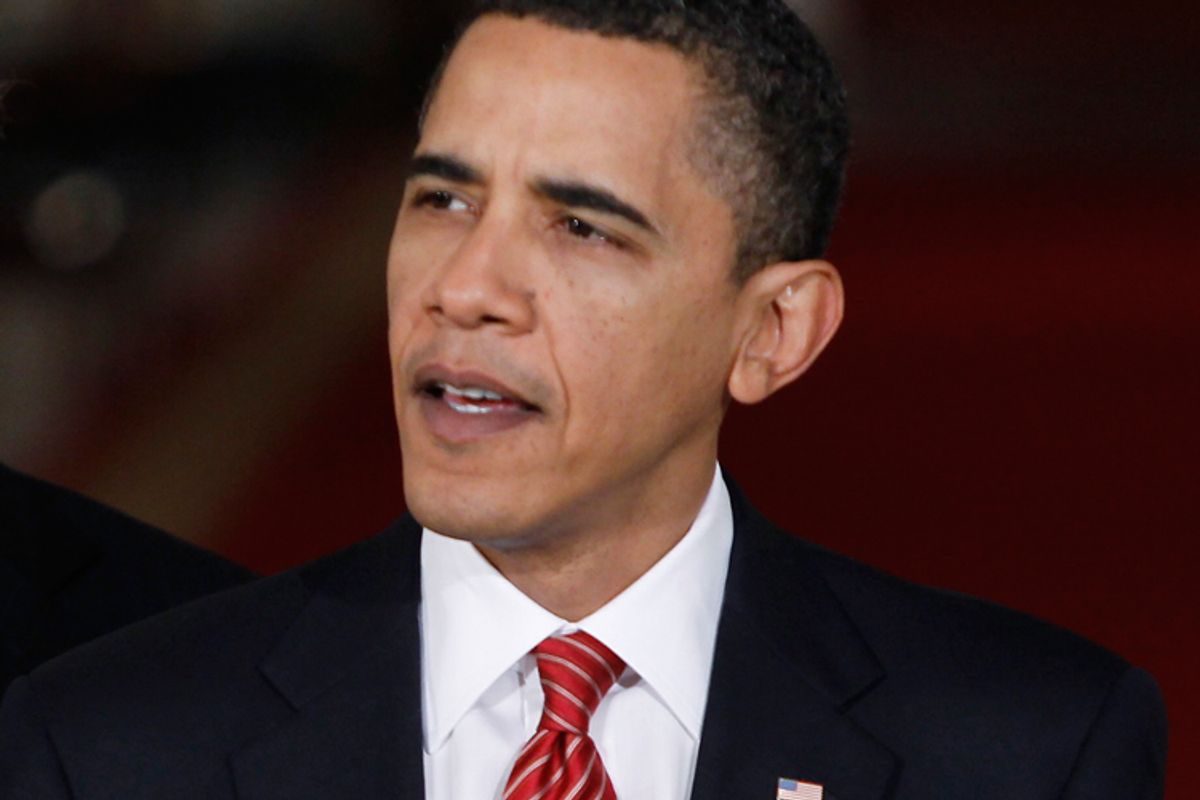 President Obama makes a statement at the White House after the historic healthcare vote on Sunday night.
--

Legislative history isn't usually made around midnight. But if the late hour by which the House finally passed a healthcare reform bill Sunday night meant Democrats were tired, they didn't show it at all once the voting was finished. Jubilant lawmakers swarmed around the Capitol; President Obama showed up on TV, live from the White House, to take a victory lap, too.

"Tonight, after nearly 100 years of talk and frustration, after decades of trying and a year of sustained effort and debate, the United States Congress finally declared that America's workers and America's families and America's small businesses deserve the security of knowing that here in this country, neither illness or accident should endanger the dreams they've worked a lifetime to achieve," Obama said. "Tonight, at a time when the pundits said it was no longer possible, we rose above the weight of our politics, we pushed back on the undue influence of special interests, we didn't give in to mistrust or to cynicism or to fear. Instead, we proved that this government -- a government of the people and by the people -- still works for the people."

Never mind that Republicans went into knee-jerk political mode right after -- before, really -- the vote, telling anyone who would listen that Congress had actually just guaranteed a big GOP November by passing the bill. Democrats either didn't agree with them about the political fallout, or just didn't care.

"I feel more than gratified," said Rep. John Lewis, D-Ga., standing just outside the House chamber. Lewis, the civil rights leader-turned-lawmaker, had been called "nigger" by furious tea party protesters just the day before, but he's been through far worse. "I feel a sense that we were on the side of the angels. And when historians pick up their pens and write about this period, they will have to say that the majority party forgot about the politics and did the right thing."

The victory lap almost didn't happen. Democrats had fallen into a dazed panic in January, when Scott Brown won the Massachusetts special election to fill the Senate seat from which Ted Kennedy spent a career pushing for universal access to healthcare. For most of February, the conventional wisdom was that the bill was dead. The House would never pass the Senate's healthcare bill, larded up with special deals set up to pick up the 60 votes it needed to avoid a GOP filibuster in December; the Senate couldn't take up the legislation again, with Brown joining Republicans to doom it. Sunday night, Brown tried to bring it all back to those wintry days of Democratic gloom. "Today's vote shows that leaders in Washington continue to ignore the will of the people," he said in a statement.

But since Teddy Roosevelt first tried to get universal healthcare nearly a century ago, no Congress had come as close as this one to finishing the job, and Democrats slowly woke up and realized that yes, they still controlled the House and Senate by wide majorities, and Obama was still in the White House. "We would not go to incrementalism, we would not go to some 'Kiddiecare' bill," Rep. George Miller, D-Calif., told reporters early Monday morning. "Whoever was thinking about that, they just forgot to call the speaker. And in fact, when they did, it was not pretty."

Miller, the chairman of the House Education and Labor Committee, has been in Congress since 1975, and he called this bill one of his proudest moments. "It's the accomplishment of a lifetime," he said.

But the legislation that is now heading to Obama to sign into law is chock full of GOP proposals, the product of months of bipartisan negotiations in the Senate -- and beyond that, some progressive priorities were glaringly absent. There's no public option, nothing remotely approaching a single-payer healthcare system. There isn't even a mandate that employers provide insurance for their workers, only a fine charged to companies whose employees get federal subsidies to buy their own coverage. It had the backing of the drug manufacturers, the hospitals, the doctors, all the major industries involved in providing healthcare in America except the insurance companies. And even insurers will wind up making billions of dollars, as millions of Americans suddenly get access to their products.

No one involved in the fight was talking about that Sunday night, though. For that matter, no one was really even talking about how the Senate was going to work its way through the final step in the battle -- passing a package of amendments using the budget reconciliation process, which needs only 51 votes but leaves the bill vulnerable to all kinds of parliamentary mischief in the next few weeks. "How do you like those 220 votes?" Pelosi asked reporters as she swept through the Capitol on her way to a loud ovation from the staff waiting in her office.

She, and Obama, had just done what no speaker or president, Democrat or Republican, had ever managed before. The victory lap may have come a little late, but it was deserved.