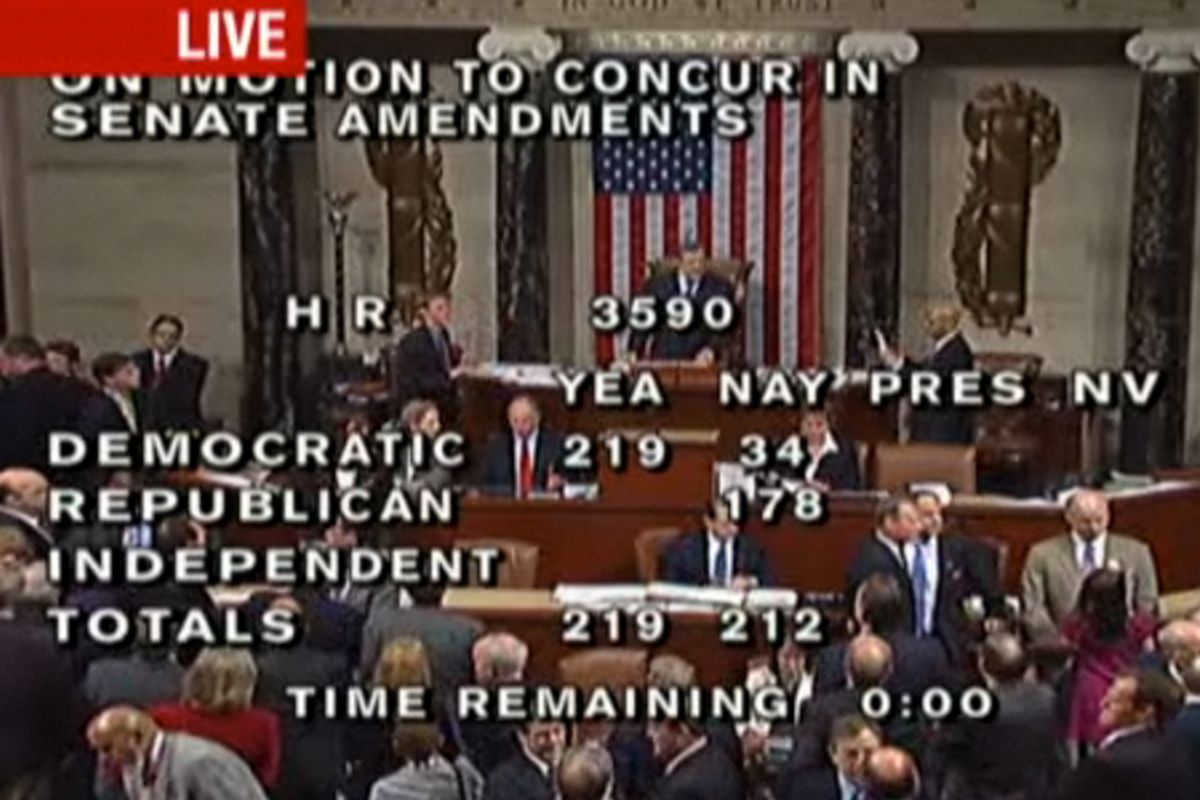 The moment Democrats have been waiting for is almost here: The House plans to vote on the healthcare reform bill Sunday night. Lawmakers are debating the Senate's healthcare bill, and they'll soon vote on that and a budget reconciliation measure designed to make changes to it. Look here for updates throughout the day, and read earlier coverage here and here.

12:04 a.m. Eastern: Practically the entire Capitol Hill press corps spent about 15 minutes trying to get Republicans to squeal on whoever yelled, "Baby killer!" at Rep. Bart Stupak. It was hard to take seriously for more than about 30 seconds; whoever did it didn't come forward, and at any rate, Joe Wilson proved that yelling impolite things on the House floor is good for fundraising in the GOP.

Rep. John Campbell, R-Calif., was on the case, though -- every few minutes, he walked onto the floor, then came back out to talk to reporters and give us an update on what he'd figured out. "The people who know won't give it up," he declared solemnly, after informing us the shouter was a Texan.

10:52 p.m. Eastern: The House passed a sweeping, flawed but still historic healthcare reform bill Sunday night by a vote of 219-212, sending the legislation to President Obama to sign into law and fulfilling a campaign promise made by generations of Democrats: to provide universal access to healthcare.

As the vote tally reached 216, putting the bill over the top, Democrats cheered jubilantly, and started chanting, "Yes we can! Yes we can!" Republicans -- all of whom voted against the bill, joined by 34 Democrats -- sat stone-faced.

The vote caps more than a year of debate, though a few more minutes of House chattering is still on tap for Sunday night: immediately after the bill passed, lawmakers moved into a brief debate on a Republican motion to send the legislation back to committee. That won't pass. Right after that, the House will take up a budget reconciliation measure designed to fix the healthcare bill.

10:34 p.m. Eastern: The House is voting now on the Senate's healthcare reform bill.

Speaker Nancy Pelosi gave the final speech just before the vote started. "We will be joining those who established Social Security, Medicare and now tonight, healthcare for all Americans," she said. She evoked the memory of the late Sen. Edward Kennedy, "who made healthcare his life's work," as she wrapped up her remarks; when she finished speaking, Rep. Patrick Kennedy, D-R.I., Kennedy's son, was the first person who greeted her. Pelosi gave him a quick kiss on the cheek.

Sunday's vote represents a triumph for Pelosi, who managed to steer a massive bill through an often divided Democratic caucus, even keeping Congress focused on the goal after Democrats lost their filibuster-proof majority in the Senate. She walked into the chamber to a standing ovation from the Democratic side of the room. Seconds earlier, GOP leader John Boehner had finished his own speech; he left his notes on the podium and walked up the aisle to the Republican cloakroom, shaking hands on his side of the aisle, ignoring Pelosi's entrance.

Boehner had asked Pelosi to force an actual call of the roll, instead of letting members vote the way they usually do, with an electronic machine that records each lawmaker's vote. Democrats basically pretended Boehner wasn't making the request, and moved ahead with the normal procedure.

10:07 p.m. Eastern: House Minority Leader John Boehner is speaking now, giving the Republican closing argument. But he accidentally gave Democrats a chance to rally themselves a bit. "Can you honestly say that if you like the healthcare plan you have, that you can keep it?" he asked. "Yes!" Democrats yelled back. "No, you can't," he snapped. Which, naturally, prompted an Obama-esque retort from the Democratic caucus: "Yes we can!"

Not long afterwards, Boehner started shouting that Democrats haven't read the bill. "Hell no, you didn't!" he yelled. A Democrat objected to the language. "Both sides will do well to remember the dignity of the House," Rep. Dave Obey, D-Wisc., the acting speaker, told Boehner.

Boehner's speech played directly to the tea party rally still going on outside the Capitol. "Shame on each and every one of you who substitute your will and your desires for those of your constituents," Boehner told Democrats. That's been a frequent GOP refrain, with polling showing the healthcare bill is unpopular (even if the actual provisions in it poll well) -- because the public says it's against "the healthcare bill," Congress should drop it. Evidently, the Republican theory of governing, circa 2010, consists of doing whatever a poll says a majority of voters want at any given moment.

What the GOP won't say, though, is that the main reason the vote will come so late is because Republicans have done all they can do to drag out the day's proceedings into the night. For instance, earlier Sunday, the House held a roll call vote on a measure to name a post office in Columbus, Ohio, for an activist named Clarence Lumpkin. That passed, 420-0, with 10 lawmakers skipping the vote. But it also took up more than 15 minutes that could have been spent debating the bill. Same goes for another measure, which passed 426-0, that expressed the "sense of the House of Representatives regarding the meritorious service performed by aviators in the United States Armed Forces who were shot down over, or otherwise forced to land in, hostile territory yet evaded enemy capture or were captured but subsequently escaped."

Both roll call votes were forced by GOP objections to passing them, and other non-controversial business, on a voice vote.

"Republicans have made stuff up throughout the course of this debate -- without a bit of shame or a hint of blushing," said Democratic National Committee spokesman Brad Woodhouse. "At least they are going out on a low note -- we wouldn’t expect anything different."

9:30 p.m. Eastern: Debate on the healthcare reform bill is starting to wrap up, and the leaders of both parties will soon head to the floor to make their closing speeches. The last couple of hours have been a whirlwind of very brief remarks by Democrats and Republicans alike; each member wants to say they had a chance to talk about the bill on the floor, so the House is rolling through minute-long (or shorter) remarks from nearly all of its members.

Because the schedule is so tight, and because there's really nothing else happening on Capitol Hill, there are actually quite a few lawmakers sitting in the chamber listening. Usually, the speeches on C-SPAN are delivered to an empty room. Sunday night, though, about two dozen Republicans and two dozen Democrats have been there throughout.