Mitt Romney's healthcare hypocrisy and the GOP base 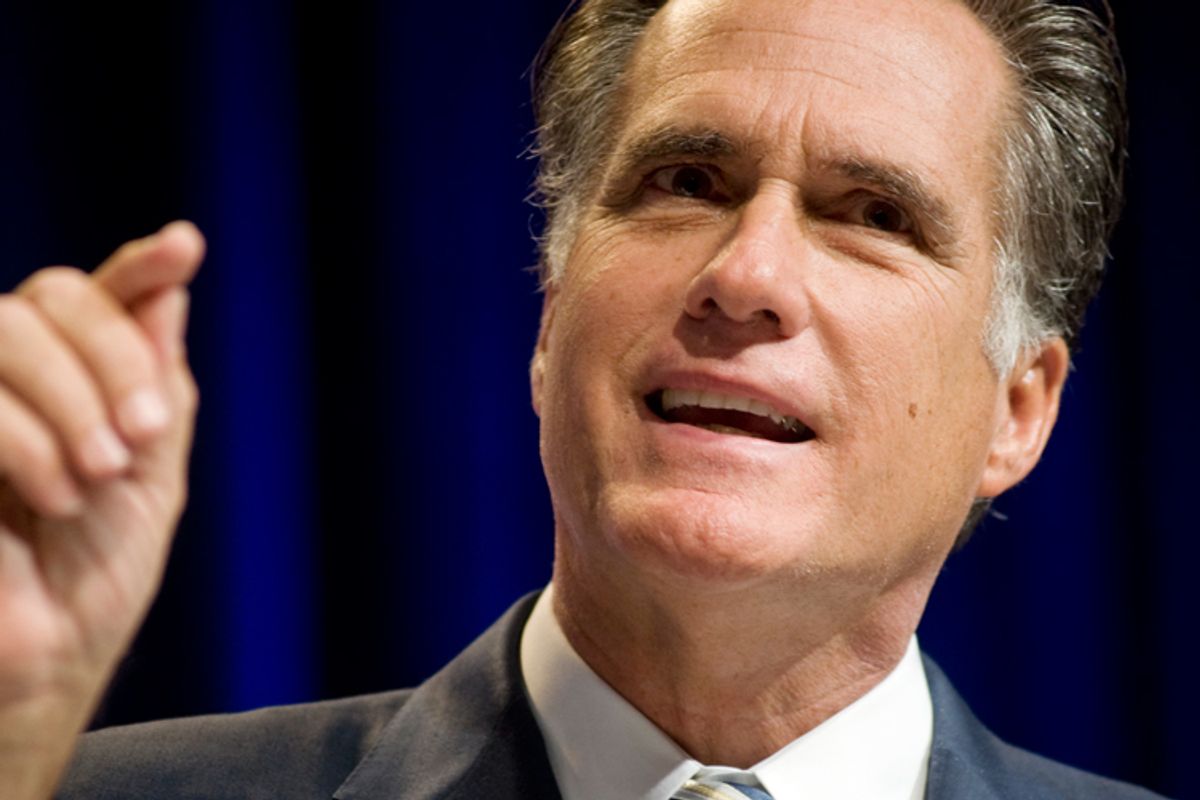 It's not news when man bites dog, so why should it be any different when Mitt Romney makes a brash and insincere pronouncement?

And yet there was the one-time Massachusetts governor forcing his way into Monday morning's headlines with what may have been the most over-the-top of all of the over-the-top Republican reactions to the House's passage of Barack Obama's healthcare plan.

"An unconscionable abuse of power," Romney declared while asserting that the president "has betrayed his oath to the nation."

When Mitt starts talking like this, it's usually because he knows his own past record makes him vulnerable on the issue at hand.

And when it comes to healthcare, his hypocrisy is particularly galling. Romney is actually the only governor in American history ever to impose an individual health insurance mandate on his citizens. And an individual mandate, of course, is at the heart of Obama's reform package.

Nor is the mandate the only common ground between RomneyCare and ObamaCare; the Massachusetts plan that Romney signed into law in 2006 is essentially the blueprint for Obama's plan. Both rely on the same basic formula: a requirement that everyone purchase insurance and government assistance for those who can't afford it.

But Romney can never admit this. He's the early front-runner for the 2012 GOP presidential nod and the party's base is convinced that Obama's reform package represents some kind of Marxist plot. So Romney must be against it -- really against it. It's as if he believes the combination of heat and volume in his response to the House vote will cause Republicans to ignore his own Massachusetts record.

It's worth remembering how Romney got himself into this pickle in the first place, because it says a lot about the irrational nature of the GOP opposition to Obama's healthcare push.

In the spring of 2006, Romney and his office worked closely with Massachusetts' Democratic-dominated Legislature to craft the state's new healthcare law -- individual mandate and all. Romney's motives had nothing to do with currying favor with the state's left-of-center electorate. He had long since shifted his attention away from the Bay State and to the national stage. He switched his position on abortion and announced he wouldn't seek a second term in 2005, and by '06 he was spending nearly as much time out of the state as in it -- never missing a chance to warm up national conservative crowds with cracks about his home state.

This is important to note because it establishes that Romney saw his healthcare law as an opportunity to distinguish himself from his '08 GOP rivals -- not as the political albatross it has become. And he had good reason to feel this way. With the law, he could point to a singular gubernatorial achievement, bolstering his executive credentials. It also created an unspoken contrast with John McCain, the GOP's front-runner and a creature of the legislative branch.

Nor did Romney have to fear a revolt from the right. Back in '06, the standard for healthcare reform was still Bill Clinton's failed 1994 scheme, which would have issued citizens their own insurance cards and set up a complicated new bureaucracy. Romney's plan was the antithesis of that: a private insurance-friendly individual mandate and a new "connector" that would allow consumers in the individual and small group markets to shop around for the best deals. Notably, Romney sought and received the blessing of the Heritage Foundation before signing the bill at a lavish ceremony (during which a Heritage representative spoke).

So what changed between then and now? It's pretty simple, actually: Obama became the president. And the right decided from the beginning that his healthcare push (just like his stimulus bill and cap-and-trade and so on) represented creeping socialism.

Back in 2006, Romney could use healthcare to position himself as the heir to George W. Bush's "compassionate conservative" mantle: See, he would say, I found a conservative, market-friendly way to solve a problem that Democrats -- like Bill and Hillary in '94 -- tried and failed to address for decades.

But that doesn't work with Obama in the White House. Last summer and fall, Romney was able to say that his law was different from Obama's plan because Massachusetts lacked the public option that Democrats in Washington were pushing for. This was disingenuous, obviously, but at least it made for a good sound bite.

Now he can't even claim that: Despite the best efforts of liberal groups, there will be no public option in the final bill that Obama signs. So Romney is left with the right's favorite old fallback: states' rights. What I did works for my state, his new message goes, but it would be a disaster to do it nationally. (He can thank Sen. Scott Brown, who voted for RomneyCare as a Massachusetts state senator in 2006, for introducing this argument during the state's recent Senate special election.)

It's easy to snicker at Romney's healthcare problem -- just desserts for a man who has so thoroughly and shamelessly reinvented himself over the years. But it actually says more about the irrational state of today's GOP base, which is vilifying President Obama for doing almost exactly what it hailed Romney for doing just four years ago.